Is the Sun Frowning After Scrubbed Launch of Solar-Wind Satellite? 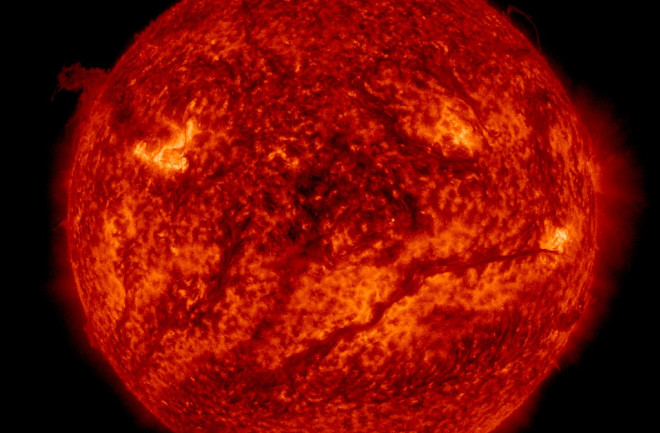 A view of the Sun acquired by NASA's Solar Dynamics Observatory today appears to show the Sun frowning. Windiness forced NASA to scrub the launch yesterday of a new satellite designed to provide real-time monitoring of, well, the solar wind. And from the looks of things, the Sun is not happy about it. | Update, 2/11/15: At a few minutes past 6 p.m. EST, the Deep Space Climate Observatory, or DISCOVR, successfully lifted off from Cape Canaveral Air Force Station in Florida. For a photo and more information, scroll down. | The image above was acquired at 10:30 a.m. EST today by NASA's Solar Dynamics Observatory. I see two bright spots that look like eyes — one of which actually unleashed a solar flare yesterday. (You can see it in an animation of images from SDO covering the past 48 hours — scroll down for it.) And that long, dark, snaking line across the lower half of the sun is a filament of solar material hovering above the sun's surface. Together, these features make it seem like the Sun is frowning. As NASA puts it:

SDO shows colder material as dark and hotter material as light, so the line is, in fact, an enormous swatch of colder material hovering in the sun's atmosphere, the corona. Stretched out, that line – or solar filament as scientists call it – would be more than 533,000 miles long. That is longer than 67 Earths lined up in a row.

The scrubbed launch yesterday was of the Deep Space Climate Observatory, or DISCOVR. It has been rescheduled for today at 6:03 EST. The National Oceanic and Atmospheric Administration will use the DISCOVR spacecraft to monitor the wind of charged particles emanating from the Sun — in real time. This will help NOAA provide accurate and long lead-time space weather alerts and forecasts. According to NOAA:

Without timely and accurate warnings, space weather events like the geomagnetic storms caused by changes in solar wind have the potential to disrupt nearly every major public infrastructure system, including power grids, telecommunications, aviation and GPS.

We'll see whether DISCOVR gets off the ground later today. In the meantime... | 7 p.m. EST: SUCCESS! DISCOVR is now on its way to a position a million miles from Earth. Here it is, right after liftoff, riding on a column of flame.

Source: NASA DISCOVR is a successor to NASA's Advanced Composition Explorer spacecraft, or ACE, which was launched into orbit in 1997 to provide solar wind alerts and warnings. ACE has long outlived its designed lifetime. Like ACE, DISCOVR will take up station at a point called L1, where the gravity of the Earth and Sun cancel each other out. This is a good position because solar wind particles streaming from the Sun reach the spacecraft about an hour before Earth. That will give DISCOVR time to relay data to Earth of increases in the solar wind that could lead to damaging geomagnetic storms. And now, back to our original programming...| http://youtu.be/bYbEFvlmrS0 The video above shows 48 hours of observations of the Sun by the existing SDO spacecraft. It's seen here in the AIA 304 channel, which is good at showing areas where cooler dense plumes of plasma comprising filaments and prominences are located above the visible surface of the Sun. | Update 2/11/15, 7:30 p.m. EST: I'm sorry, but I just can't resist — one more image, this one created using channels that highlight a number of features in the Sun's chromosphere (an irregular layer just above the visible surface) and corona: