Is Planet X Guiding Dwarf Planets Around Our Solar System? 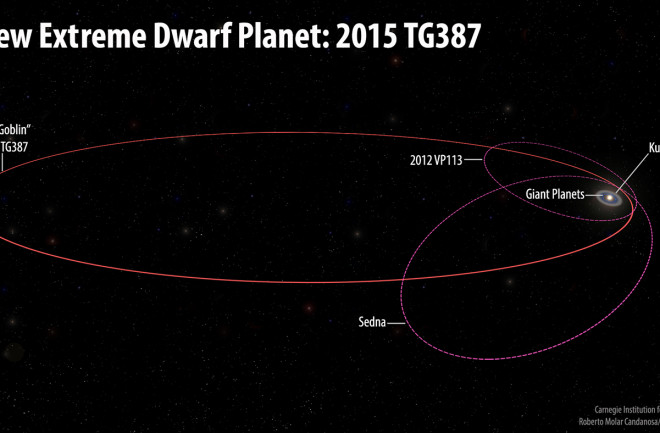 This visualization compares the orbits of "The Goblin" and other, similar objects.(Credit: Illustration by Roberto Molar Candanosa and Scott Sheppard, courtesy of Carnegie Institution for Science)

Astronomers have found a dwarf planet out beyond Neptune called “The Goblin” because of its initial discovery around Halloween. The Goblin, officially named 2015 TG387, joins other small objects far out in our solar system, and it adds to a tantalizing theory about another much more massive “Planet X” hiding beyond Neptune.

Carnegie astronomer Scott Sheppard searches for and studies far-off objects like The Goblin. Over the past few years, they’ve noticed something interesting about the ragtag group of smaller bodies circling the outer reaches of our solar system. Though y0u’d expect their orbits to be random, Sheppard says that they all seem to be in harmony with each other. The planetary dance is a clue that something with a much larger gravitational pull is shepherding them — Planet X.

“Finding all these objects in a similar place,” Sheppard explained, “suggests that there is a big planet out there that’s shepherding The Goblin and other objects.”

While researchers aren’t absolutely sure what Planet X’s orbit might look like, they have an idea, Sheppard explained. His research team has been running orbit simulations, and The Goblin fits into them neatly.

If you randomly put a massive planet like Planet X in the outer solar system for a very long time, such a planet “would make The Goblin’s orbit unstable, so you’d expect The Goblin to be basically ejected out of the solar system,” Sheppard said. The stability that the team found in simulations means that the two objects will never get close or threaten to collide, and would explain why we see The Goblin today.

So, by discovering The Goblin, this team found more evidence for the existence of Planet X and more information about what this planet might be like. Sheppard and his team will continue to scan the night sky in search of more objects like The Goblin — smaller prizes that could one day help them to land the big one.