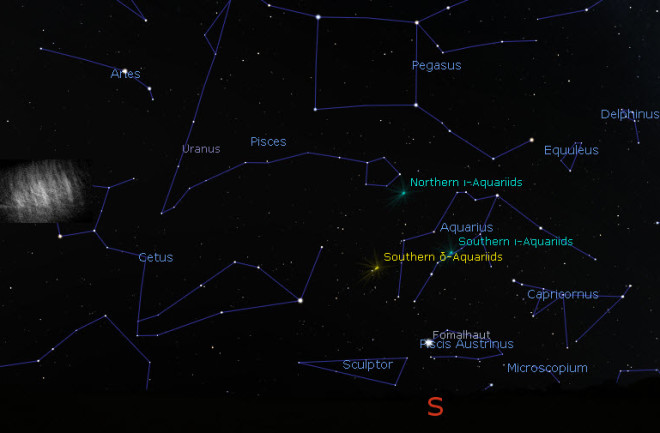 An artist's impression of the Kordylewski cloud in the night sky (with its brightness greatly enhanced) at the time of the observations. (Credit: Gábor Horváth) A team of Hungarian astronomers and physicists may have finally confirmed two clouds of interplanetary dust orbiting Earth that were first reported in 1961. There are five points of stability in the Earth-moon system where gravitational forces keep objects in position. Scientists call these “Lagrange points," and they're numbered as L1 to L5. Back in 1961, Polish astronomer Kazimierz Kordylewski claimed to have taken pictures of dust that formed two cloud patches at L4 and L5. Astronomers now call these Kordylewski clouds. But because the dust clouds are so faint, some scientists still debate if they really exist, according to a statement, but a team of Hungarian scientists say they are now confident that they’ve confirmed the existence of these clouds with new observations. “We are sure that the Kordylewski dust cloud exists at the Lagrange point L5 of the Earth-moon system,"lead study author Gábor Horváth of Eötvös Loránd University said in an email. "The detected polarization characteristics cannot be explained by any other optical phenomena.” Earlier this year, the team, which includes Judit Slíz-Balogh of Eötvös Loránd University and András Barta, modeled these clouds to assess how they might form and how they might be best identified. The team then used linearly polarizing filters attached to a camera lens and a sensitive photon detector at Slíz-Balogh’s private observatory to take exposures of the expected location of the L5 cloud. The cloud isn't very bright, but it is measurably polarized, according to Slíz-Balogh. And that's how the research team says they were able to capture it. “Many astronomers assume that these dust clouds do not exist,” Horváth said. They assume that sun, solar wind and other planets may disrupt the dust cloud's orbit. However, Horváth continued, with these new observations, “the only explanation remains the polarized scattering of sunlight on the particles collected around the L5 point.” This work appears in two new papers: here and here.