Inside the Experimental Cuisine Collective 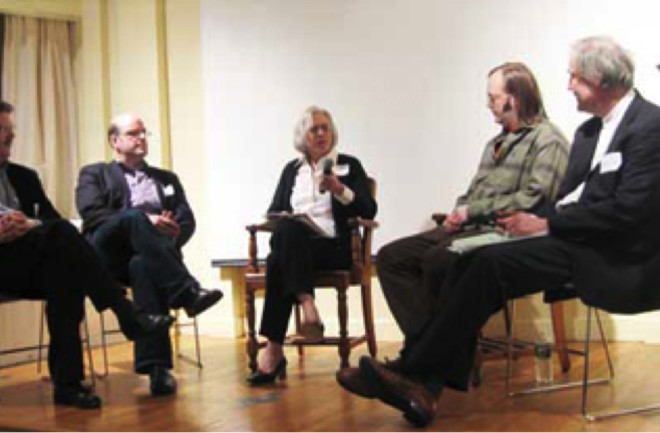 Robert Margolskee, Mitchell Davis, Florence Fabricant, Wylie Dufresne, and Hervé This at the Experimental Cuisine Collective's launch workshop on April 11, 2007. Photo credit: Antoinette Bruno (Star Chefs) Launched in 2007, the Experimental Cuisine Collective (ECC) has proven itself as an invaluable resource for those interested in learning about the scientific principles behind food. Founded by Drs. Kent Kirshenbaum and Amy Bentley of New York University in collaboration with Chef Will Goldfarb of WillPowder, the ECC hosts workshops approximately five times per year, each featuring different topics and/or speakers. ECC’s current Director is Anne McBride, a PhD candidate in Food Studies at NYU and Culinary Program/Editorial Director for the Culinary Institute of America. Widely recognized for her ability in establishing connections between scientists and chefs, McBride has been instrumental in developing ECC’s programs. ECC’s workshops have gained nationwide acclaim, featured in media outlets such as Serious Eats, New York Observer, and even the Food Network! The impressive roster of past ECC speakers include renowned chefs and scientific minds such as Dan Barber, Wylie Dufresne, Rachel Dutton, and Mark Bomford. The topics of ECC workshops are also interestingly diverse, covering topics from soda politics with Marion Nestle to cooking insects with the Yale Sustainable Food Project to the New York Academy of Medicine’s Eating Through Time conference. Our recent Science & Food public event featured Dr. Kent Kirshenbaum , who stopped to answer a few questions for us about the ECC:

What motivated you to start the Experimental Cuisine Collective?

I was asked by the National Science Foundation to consider establishing a science outreach program as part of their emphasis on "Broader Impacts" of scientific research. I've always been eager to establish connections between scientists and experts from other disciplines, so exploring the terrain between chemistry and cuisine came about very naturally.

What has been one of your most memorable experiences since founding the site?

The Experimental Cuisine Collective has always been more about direct engagement rather than as a web-based portal for information. One of my most memorable experiences with the ECC was preparing an alginate-based mango-juice pearl with a 4th grade student at a science fair. I asked her if we were doing science or cooking. After a moment's careful thought she replied, "I guess it's both!" That was a very satisfying moment.

Another memorable experience was giving a lecture series about the ECC throughout New Zealand during the "International Year of Chemistry". The director of the ECC, Anne McBride, and I got the chance to prepare what we believe were the world's first vegan pavlovas for our audiences throughout New Zealand. We love Kiwis!

What do you hope the Experimental Cuisine Collective's readers take away from the website?

I think they are excited about the lecture programs we are offering at NYU, and the opportunity to learn what science can contribute to cooking -- along with how chefs can advance scientific objectives. Plus, I hope readers are quick to appreciate that we have been offering our programs for almost 10 years, and all of it has been completely free of charge!

Are there any upcoming projects you would like people to know about?

Our upcoming meeting will be devoted to hydroponic farming, in partnership with the Institute of Culinary Education. We will be meeting at ICE's indoor 540-square-foot farm in lower Manhattan, designed by Boswyck Farms, which has 3,000 plant sites and in which 22 crops are currently growing. The amazing thing about this farm is that it is literally across the street from the tallest building in the Western Hemisphere. Science can help us grow in so many ways and places!