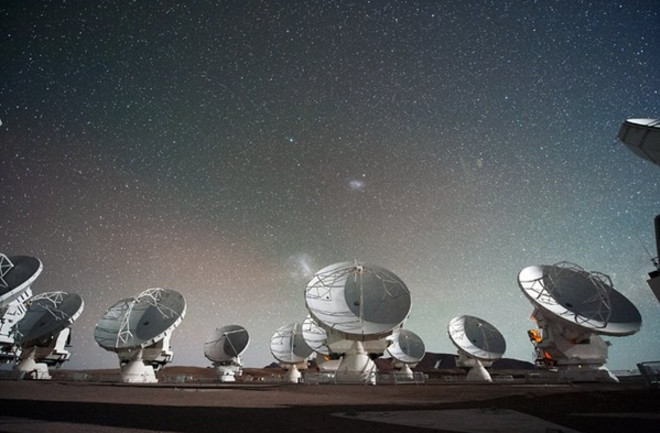 The Atacama Large Millimeter/submillimeter Array is part of the globe-spanning Event Horizon Telescope effort to directly image a black hole. (Credit: ESO/C. Malin) Trying to take a picture of a black hole — an object that is, by definition, invisible—sounds like an exercise in futility. But for decades, theoreticians suspected it may just be possible to get a detailed view of a black hole’s perimeter, right up to the edge of the event horizon, the fabled point of no return. And a core group of astronomers spent years trying to turn that prediction into reality. Now, they finally have. Astronomers announced Wednesday that they’d captured a clear view of the supermassive black hole in galaxy M87. It was a truly international unveiling, with press conferences held around the world — a fitting stage to describe the results of an astronomical instrument, the Event Horizon Telescope (EHT), that also spans the globe. Their results were published in a series of six papers released Wednesday in The Astrophysical Journal Letters.

Here is the first direct image of a supermassive black hole. Captured by the Event Horizon Telescope, a network of eight radio telescopes spread across the world, the image shows the bright, spinning disk of material around the galaxy M87's supermassive black hole. Due the the intense gravity present near black holes, the appearance of the disk is warped. (Credit: EHT Collaboration)

The idea of black holes dates back to at least 1783, when British scientist John Michell suggested that our universe harbored “dark stars” whose density was so great and gravity so strong that “all light emitted from such a body would be made to return towards it.” But the notion of possibly seeing one is much more recent, and relies on the counterintuitive idea that an invisible object still casts a visible shadow — in this case a darkened region, or silhouette, extending inward from the event horizon, bounded by a ring of hot, luminous gases.A 1999 analysis suggested we might actually be able to observe this shadow, by using special techniques. The authors claimed, “there exists a realistic expectation of imaging the event horizon of a black hole within the next few years.” It took a bit longer than that, but despite considerable technological obstacles, the EHT has finally managed it. That accomplishment comes thanks in large part to astrophysicist Shep Doeleman, a fix-it kind of guy now based at Harvard University, who was willing to take on the challenges and persuaded a large number of talented people to join him. The best hope for success, he said, lay in pushing their methodology (a technique known as very-long baseline interferometry) to the extreme — “putting it on steroids.” Two of the biggest challenges are gathering enough light from a distant black hole, and having enough magnifying power to resolve the details. Both are solved by using multiple large radio telescopes scattered throughout the world: by combining their observations, astronomers effectively created a single telescope with a lens as big as the planet.

Shep Doeleman, at the Large Millimeter Telescope in Mexico, has traveled extensively to assemble the planet-spanning Event Horizon Telescope. (Credit: Igor Jimenez) But it’s not easy making this actually work. The dishes would have to point at the same target with extreme accuracy, and the reflecting surface on each dish would need to be exceedingly smooth, devoid of any bumps or dips greater than a fraction of a millimeter. What’s more, Doeleman explained in a previous interview, “you have to synchronize all the measurements to within a microsecond, and save the signals so that you can compare them and combine them. You also need to know the geometry of the Earth and the locations of the telescopes to within a centimeter.” When you add those demands to other complicating factors — the vagaries of weather, along with the technical glitches that inevitably arise — it’s not surprising that it took 20 years, rather than “a few,” to achieve that groundbreaking result promised in the 1999 paper.

The setbacks came early and often. Doeleman and his international colleagues began their first experiment in 2006, using a telescope in Arizona and another in Hawaii. They hoped to catch a glimpse of the Milky Way’s resident supermassive black hole, named Sagittarius A* (pronounced A-star). They got nothing for their exertions and spent months sifting through the data, trying to figure out what went wrong. “The worst part about not getting a detection is that you don’t know when to stop looking,” Doeleman said. After a long “sleuthing exercise,” the team realized there’d been a problem with one of the receivers. “A lot of endeavors don’t pan out until the second or third or fourth try,” he adds. “You have to be optimistic and confident that you are on the right path.”

The EHT isn’t just one telescope: It’s a network of eight radio telescopes in Hawaii, Arizona, Spain, Mexico, Chile and Antarctica. (Credit: Alison Mackey/Discover) They tried the same experiment a year later, incorporating a third radio telescope in California. This time they succeeded, demonstrating the feasibility of the general approach. But they would need a much bigger array — including dishes in Mexico, Chile, Europe and Antarctica — before they could have a realistic shot at obtaining a picture of a black hole. The EHT’s inaugural observing run took place in April 2017 with observations recorded and stored at eight geographically dispersed telescopes. Weather data collected each day from every site posed “an often-agonizing decision,” Doeleman reported. “Will the heavy clouds surrounding a mountaintop telescope dissipate, or will they settle in for the night? Is the weather risky at many sites, or maybe just one? And even if the sky above clears up, might ground conditions early in the evening leave a dish iced up and unusable?” In the end, the weather proved “overwhelmingly excellent,” he said, and they were able to observe five days out of a possible 10-day window. But that still wasn’t the end of the challenges. All of this data, stored on 960 computer hard drives, had to be combined, which meant physically connecting them. (You can’t just upload terabytes of data to the cloud.) This resulted in more lost time: The crates of hard drives shipped from Antarctica did not arrive until mid-December because the South Pole station closes during its winter months, from February to October, with no flights coming in or out. Add in all the time spent double and triple checking the numbers, and it’s what Doeleman has called “the ultimate in delayed gratification.” But after 20 years, the delay is finally over, and the EHT’s announcement can bring gratification to all the scientists and nonscientists alike who’ve ever wondered what a black hole actually looks like.