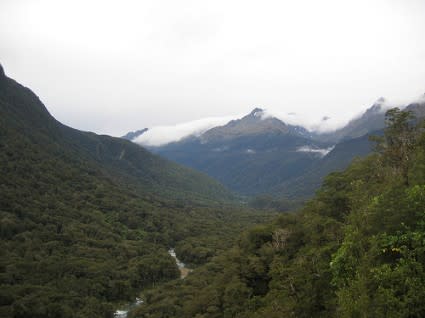 Fiordland National Park in New Zealand, the location of the study

What's the News: Researchers have mapped out the detailed geological history

of a 300-square-mile chunk of New Zealand, from 2.5 million years ago to the present day. The study

showed how glaciers carved out the area's distinctive valleys using a little-known technique called thermochronometry, which involves shooting proton beams onto rocks and making note of what happens---along with some impressive analytical skills. How the Heck: Thermochronometry, as the name implies, is a way to measure both temperature and time. The general principle is that the deeper something is below the Earth's surface, the warmer it is; thus, tracking a rock's temperature over millions of years reveals how deep the rock was as it cooled. This study used a particular version of the method called helium-4/helium-3 thermochronometry, first developed

by a member of the research team in 2005. This technique lets you track the time and temperature for apatite, a mineral found in rocks like granite that solidify from liquid magma far beneath the surface. Two chemical elements in apatite---uranium and thorium---are radioactive. As they decay over millions of years, they produce helium-4, the common version, or "isotope

," of that element. That's where time and temperature come in: The rate at which helium-4 leaks out into nearby rock slows as the apatite

cools. The researchers shined a proton beam onto apatite-laden rocks, which creates the lighter helium isotope, helium-3. This reaction sends both types of helium hissing out of the rock as a gas, which the researchers can then measure for helium-4 levels. Once they know that, they can work backward to figure out how quickly the rock cooled---and thus, where it was over the past 2.5 million years or so, providing a picture of how the Earth's surface has changed. What's the Context: Knowing how deep a rock was, and when it was there, is a big deal, given that Earth's outermost layer is constantly changing due to everything from earthquakes to agriculture. As the Thermochronometry Research Lab at University College London puts it