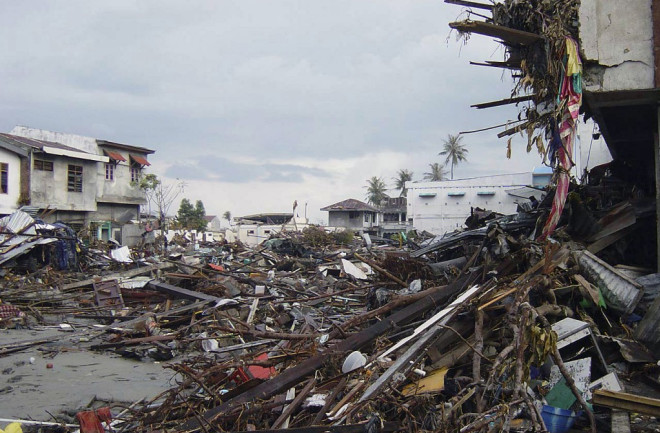 Trash and debris line the streets in downtown Banda Aceh, Sumatra, Indonesia, following the massive Tsunami that struck the area on December 26, 2004. Wikipedia. The internet is clearly still a wild frontier. We are bombarded by sensationalist or fake news all the time, sometimes by sources who merely want to increase traffic and sometimes by people who intentionally want to deceive. It is a challenge even for the seasoned professional to figure out what is trustworthy information and what is merely conjecture, rumors and downright lies. So when news about geologic events moves from the realm of the researcher to the media, what happens when the science gets distorted in such a way to instill fear and panic in the general public? In Indonesia, it appears that the police get involved. The Jakarta Post is reporting that Indonesian police are questioning Widjo Kongko, a scientist for the Agency for the Assessment and Application of Technology (BPPT), for a presentation he gave on the tsunami potential for Indonesia's southwest coast. In Widjo's study, he said there is the potential for a 50+ meter tsunami depending on the size and location of an earthquake off Indonesia's coast. However, internet news sources turned that report into a prediction that a 50 meter tsunami was going to hit Indonesia soon. The "news" spread across Indonesia rapidly via social media and even required a statement from the vice-president of the country. It appears that Indonesia authorities may be questioning all scientists who attended the Meteorology, Climatology and Geophysics Agency's (BMKG) conference on April 3. Let's parse that out for a second. This is one of the fundamental issues with how science research is handled in the media. Very rarely do scientific research studies make predictions - that is to say something will happen somewhere at a (relatively) specific time. So, if the study says something like "new data suggests that the likelihood of an eruption of Mt. Cipher is higher than previously thought", it tends to be translated by some in the media as "eruption of Mt. Cipher expected soon!" The first statement is probability, while the second statement is prediction. Widjo is being questioned because his study was interpreted by Indonesia (and international) media as a prediction of a large tsunami. So, in the minds of some, this study undermines investment in coastal properties because nobody wants to get their property washed away by a tsunami on the scale of the 2004 Boxing Day or 2011 Tohoku events. Since that devastating tsunami near Banda Aceh in 2004, rumors and fear of tsunamis have abounded in Indonesia, so any perception that areas will be struck are very serious. There are laws in Indonesia that control who can disseminate information about tsunamis and earthquakes, so this appears to be the reason why Widjo is being questioned by the police. However, scientists and administrators from the BPPT made it clear to reporters that the study that Widjo presented on April 3 was just that: a study that presented some new data and models about the potential for large tsunamis. It was the resulting media storm that followed that turned a preliminary study into a prediction of disaster, so it would seem that it is the media that made such reports that are to blame rather than the scientist himself. Beyond that, members of the Indonesia media have supported Widjo, saying his presentation is protected under academic freedom. I This folds into the same discussion that happened during the L'Aquila trial in Italy, where geoscientists for the Italian survey were tried for manslaughter for not predicting the earthquake that ended up killing 309 in 2009. In that case, the scientists downplayed the threat of a disaster based on the information on hand, partially in an attempt to quell panic driven by the media and outside "researchers" who claimed they could predict the earthquake using untested means. Luckily, the Italian Supreme Court struck down the initial finding of wrongdoing against the scientists, but likely the damage was done in terms of public trust. And that is what much of this boils down to: trust. When certain parts of the media choose to sensationalize scientific research in order to get pageviews (see below), then we continue to erode public trust in science. What is heard are dire warnings of catastrophe or promises of the miracle cure, so when these things don't materialize, another wave washes up on the shore of trust in scientific knowledge and expertise. In a climate where we are constantly bombarded by wrong information, it is especially vital that we try to communicate science clearly, accurately and in such a way that conveys the idea that there is always room for improvement in science. This does not mean the research is wrong, but rather science is fluid and always moving forward.

When you recycle news from last year pic.twitter.com/H0JtON9LAy

So, the next time you seen a news report that claims that a new study predicts that big Yellowstone eruption

is about to happen, take a moment to see what the researchers are actually saying rather than how the news sources wants you to see it. Better yet, choose news sources that don't sensationalize and don't spread rumors on Twitter or other social media that don't seem like they are reliable. Slowly, we can turn the tide against this sort of irresponsible fear-mongering.