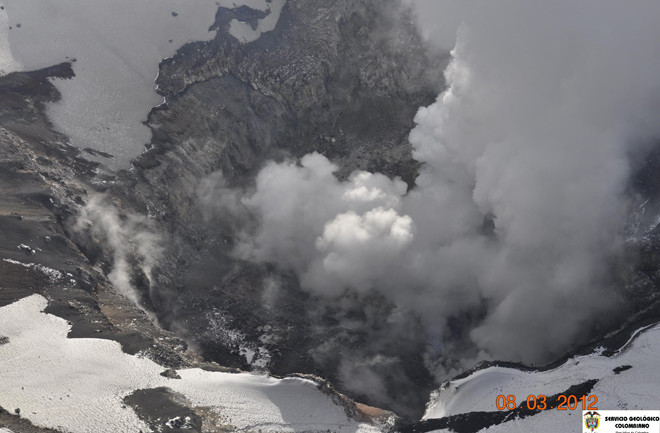 Eruptions reader Sherine pointed me towards the recent updates from INGEOMINAS in Colombia on Nevado del Ruiz. The volcano hasn't erupted in over 20 years, but the signs are beginning to point towards a potential revival of the volcano. INGEOMINAS scientists were able to do a flyover with the Colombian Air Force and got a number of shots of the summit area. They also reported "ash on the glacier, near the crater rim and on the eastern flank of the same," likely from a February 22 explosion from Ruiz. The steam plume from the main crater on the day of the flyover was ~1.4 km / 4,500 feet. That same day, a seismic signal of tremor associated with multiple small ash emissions were reported along with an increase in sulfur dioxide emissions. All of these events suggest that Ruiz is seeing heating in the summit area and likely phreatic explosions. The increased sulfur dioxide would additionally suggest new magma in the volcano. The shots of the summit area clearly show steam coming from the crater, although it is doesn't appear to show any new material in the crater. Shots of the entire summit show ash on some of the snow-covered areas as well (see below - grey on foreground slopes of the volcano).

Most people are familiar with Nevado del Ruiz due to the eruption in 1985 that killed over 23,000 people. That disaster was caused by a lahar (volcanic mudflow) generated by a small eruption from the summit crater melting the abundance ice and snow at the summit. The most recent pictures of the summit area (see below) show that there is plenty of snow to make lahars a very real hazard if Ruiz where to begin to enter a new period of eruption.