Update: we're about an hour away here (it's 1:30 UT as I write this) and I'm not seeing much more on this. I hope we'll get some footage of it as it breaks up... in the meantime, check out this animation of what the asteroid will see as it comes in. AWESOME.

Thanks to my old friend Dan Durda, I just heard that an object a couple of meters across will enter the Earth's atmosphere in a few hours! This poses no real danger to anyone, so don't fret. A diameter of two meters means it'll break up in our atmosphere, and most likely at worst rain down a few small rocks. You wouldn't want one falling on your head, of course, but the odds of that are incredibly small. The object is called 2008 TC3, and it was discovered very recently. It's really faint, which is how they know it's small. It's predicted to burn up over Africa: 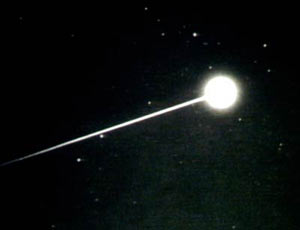 The meteor may resemble this picture of the Stardust probe re-entering Earth's atmosphere.

That means it could break up over Darfur. Perfect. Anyway, this will be a spectacular meteor! The meteors (what some people call shooting stars) you see randomly on an average night are as small as a grain of sand. Something as big as a grape would make a very bright fireball. A rock two meters across will be incredible. As Dan pointed out to me, it would be nice if some astronomers can get a spectrum of it before it burns up, then again as it burns up. Then, the big hope is that specimens will then be found and collected. This would provide great data tying meteorites with observations of asteroids in space! I'll have updates as I hear them. And didn't I promise more posts about this kind of stuff?

2:30 p.m.: Well, here's the first update: no real new info, but the Center for Astrophysics just sent out a press release. Here it is:

CfA Release 2008-19 For Immediate Release BOULDER-SIZED ASTEROID WILL BURN UP IN EARTH'S ATMOSPHERE TONIGHT A tiny asteroid discovered just hours ago at an Arizona observatory will enter Earth's atmosphere harmlessly at approximately 10:46 p.m. Eastern time tonight (2:46 a.m. Greenwich Mean Time). There is no danger to people or property since the asteroid will not reach the ground. It is between 3 and 15 feet (1-5 m) in diameter and will burn up in the upper atmosphere, well above aircraft heights. A brilliant fireball will be visible as a result. "We want to stress that this object is not a threat," said Dr. Timothy Spahr, director of the International Astronomical Union's Minor Planet Center. "We're excited since this is the first time we have issued a prediction that an object will enter Earth's atmosphere," Spahr added. Odds are between 99.8 and 100 percent that the object will encounter Earth, according to calculations provided by Andrea Milani of the University of Pisa. When a meteoroid (small asteroid) enters the atmosphere, it compresses the air in front of it. That compression heats the air, which in turn heats the object, causing it to glow and vaporize. Once it starts to glow, the object is called a meteor. "A typical meteor comes from an object the size of a grain of sand," explained Gareth Williams of the Minor Planet Center. "This meteor will be a real humdinger in comparison!" The meteor is expected to be visible from eastern Africa as an extremely bright fireball traveling rapidly across the sky from northeast to southwest. The object is expected to enter the atmosphere over northern Sudan at a shallow angle. "We're eager for observations from astronomers near the asteroid's approach path. We really hope that someone will manage to photograph it," said Williams. The Minor Planet Center, which is located at the Harvard-Smithsonian Center for Astrophysics, serves as the worldwide clearinghouse for asteroid and comet observations. It collects, checks and disseminates observations and calculates orbits. Headquartered in Cambridge, Mass., the Harvard-Smithsonian Center for Astrophysics (CfA) is a joint collaboration between the Smithsonian Astrophysical Observatory and the Harvard College Observatory. CfA scientists, organized into six research divisions, study the origin, evolution and ultimate fate of the universe.