In Russia, Apophis impacts YOU! 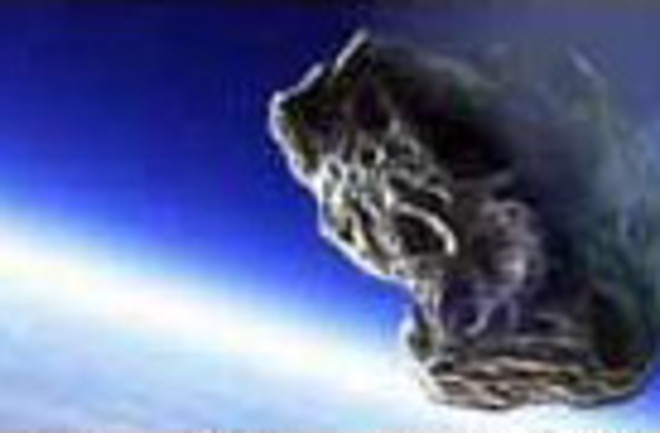 I don't spend a lot of time worrying about actual asteroid impacts -- I think about them, but the odds of a big impact are too low to panic about. We should be concerned, and absolutely we should take steps in case we find The Big One headed our way. But I sometimes wonder if I should worry more about our reactions to potential impacts. Or, more specifically, Russia's reaction. Apophis is an asteroid, a chunk of rock over 200 meters across orbiting the Sun. The problem is, the orbit of Apophis crosses that of the Earth. If the two are in the same place at the same time, well, bang! It's big enough to blow up with the force of several of hundred megaton bombs. That's not enough to wipe out life on Earth, but it's certainly enough to do a whole lot of damage, and if it happens over a city... well. In April 2029 Apophis will pass within a few thousand kilometers of the Earth's surface. It won't hit, but Earth's gravity will change the orbit of the asteroid. If the asteroid passes us at just the right distance -- in a region of space a few hundred meters across called the keyhole -- it'll swing back in seven years and hit us. We don't know the exact orbit of Apophis well enough to know for sure how close it'll pass in 2029; we can only assign probabilities. The odds of it hitting the keyhole are pretty low, though: about one in 250,000 (downgraded from 1:45,000 recently as better orbital determinations were made). Enter the Russian space agency. Anatoly Perminov, the head of the agency, was recently quoted in an AP news article that he wants to consider putting together a mission to move it out of the way, making sure it doesn't hit. I'm all for that! What worries me is this quotation:

Without mentioning NASA findings [of downgraded odds of an impact], Perminov said that he heard from a scientist that Apophis is getting closer and may hit the planet. "I don't remember exactly, but it seems to me it could hit the Earth by 2032," Perminov said.

Now, I know he's not an astronomer, but he does run a national space agency. I'd feel a whole lot better about his organizing a meeting to deflect this rock if a) he had the date right (it cannot hit before 2036, and the odds then are very low), and 2) he could actually, y'know, name his source. Yikes. Now, maybe he was misquoted by the AP. Or maybe it was out of context. And again, I don't expect the head of the space agency to be on top of every detail; it could simply be an honest mistake with the date. But I am not particularly happy when someone in that position bases a decision at least partly because he heard it from some guy he knows but can't remember who or when. Did I say yikes before? Yeah. I do think governments should take this seriously. I also know that as of right now, NASA is not taking this seriously enough. Perhaps if Russia gets this ball rolling, and other countries (like India, China, and Japan) join in, then NASA will be forced to take a better look at this situation. I know I was being a little snarky above (this is a blog, after all), but in the end some good may come of this. We just don't know enough about asteroids and how to push them out of the way. We need to set up and fly missions to a few near-Earth asteroids to understand them better and add to our knowledge of their composition, structure, and behavior. Theory is all well and good, but nothing beats some good practical experience. And while I dread the day when an announcement of a statistically significant likelihood of impact for a rock is announced, I'd be a whole lot happier and more comfortable if we had a dozen missions to asteroids already under our belt when that happens. Even if they got their start with this sketchy quote from the head of the Russian space agency.

Read more about this on Discover Magazine's 80 Beats blog.