In a Major Feat, Scientists Create a Bose-Einstein Condensate in Space 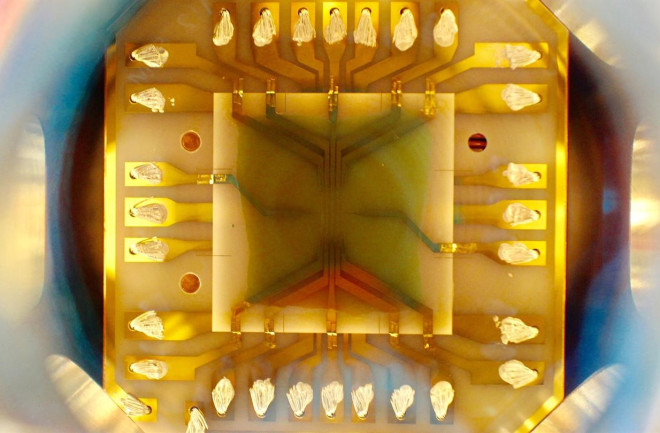 A team of researchers used this chip to create the first-ever space-based Bose-Einstein condensate. (Credit: DLR)

By blasting a miniature, experimental chip into space, scientists have created the first space-based Bose-Einstein condensate. The feat could allow for the more precise exploration of gravitational waves, dark matter, and add to our fundamental understanding of physics.

Bose-Einstein condensates (BECs) are a state of matter in which a cloud of atoms is cooled until it’s very close to absolute zero. At this extremely low temperature, the atoms move very, very slowly, clump together and become physically identical. In this state, a clump of atoms behaves as if it were a single atom. BECs can be “treated as quantum mechanical objects,” says Maike Lachmann, a co-author of the study describing the space-based BEC from Leibniz University Hanover in an email.

BECs were first created in a lab in the 1990s and have helped scientists to study and explore how atoms behave in quantum states. Now, a team of researchers has managed to make BECs in space, an environment that offers unique opportunities for discovery. It’s part of the Matter-Wave Interferometry in Microgravity (MAIUS-1) mission.

This unique experiment will allow researchers to explore and test fundamental physics, Lachmann said. He also added that studies with BECs could also be used to “scan the gravitational field of the Earth,” and potentially even “for gravitational wave detection or for the search for dark matter.”

So, aboard a sounding rocket, the team launched a miniaturized chip filled with rubidium-87 atoms. During the six-minute flight, the team was able to perform 80 experiments.

By showing it’s possible to create BECs in space, scientists hope to use the microgravity environment of the International Space Station to study how atoms behave in a quantum state better than ever before.

“On [the] ground you always have the problem that the BEC crashes to the ground after a short time and you cannot expand the measurement time,” Lachmann said. But, in microgravity, BECs can in principle be observed as long as you want because they are in free fall, he added.

This complex experiment required “a high-vacuum chamber, a laser system that stays aligned and stable in frequency, very robust electronics for control and an autonomous working software due to limited access during the flight,” Lachmann said. The lasers slow down the atoms, the electronics and software allow for scientists to control the experiment remotely and the vacuum chamber seals everything in.

The team also had to work diligently to make sure the experiment was small enough to fit and work successfully aboard the rocket. “Such an apparatus easily fills a whole room on ground. So we put a lot of effort into the miniaturization, robustness and autonomy,” Lachmann said.

This work was published Oct. 17 in the journal Nature.