In a First, Photons are 'Teleported' from Earth to Space 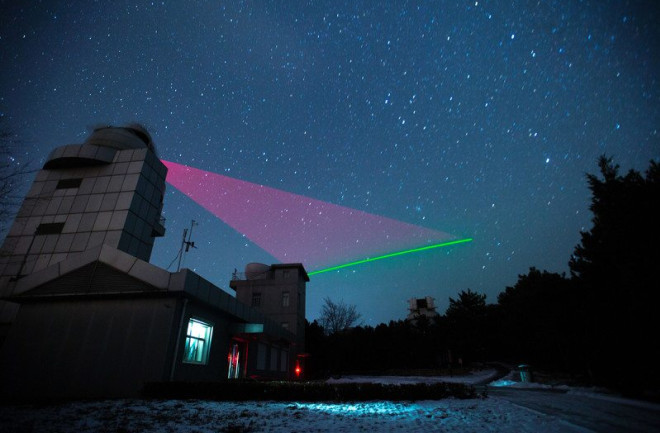 A station used for receiving information from the satellite. (Credit: Xinhua/Jin Liwang) Chinese researchers have successfully transmitted quantum entangled particles from a station on earth to a satellite orbiting far overhead. The experiment is part of an ongoing effort by researchers using the Micius satellite to achieve long-distance quantum communication, a feat that would yield hacker-proof information networks. In this most recent work, researchers from the University of Science and Technology of China beamed photons to the satellite and transmitted the state of other photons on the ground using entanglement. Transferring these so-called "qubits" allows information to be relayed securely and instantaneously.

When a particle is entangled with another, everything that happens to one affects the other. How this happens is unknown, but the effect has been confirmed in multiple experiments. Scientists had previously only been able to use the phenomenon to transmit information less than a hundred miles — any further and atmospheric conditions or imperfections in the fiber optic cables cause too much distortion. The effect is often called quantum teleportation, but its a bit of a misnomer. Unlike science fiction teleportation devices, nothing physical is being transported, just information about the state of a photon. Transmitting the photons through space, where there is no atmospheric distortion, makes for a much easier task. Last month, researchers reported using the satellite to beam information down to Earth, and now they've completed the other leg of the journey. From a mountaintop station in Nepal, they transmitted a beam of photons to the satellite as it passed directly overhead, a distance of some 300 miles. They kept the other half of the entangled pair on earth, and by measuring them both, confirmed the quantum link held.

Transmitting particles from Earth to a satellite is a bit more difficult than sending them back, because they start out in the turbulent atmosphere. This means that any slight deviations in their course will have a greater effect over the entire distance. The researchers compensate with a series of technical refinements including an extra-bright source for photon entanglement and a very narrow laser. They detailed their work in a paper published this month to the preprint server the arXiv. It's another step forward along the path to quantum networks, but there's more work to do. As with other quantum teleportation experiments, the fidelity was extremely low. Of the millions of photons sent over the course of a month, only 911 actually made it, meaning that the rate of actual information transfer is extremely low at the moment. But, with the proof-of-concept established, technology will likely to improve to the point where we one day may all be emailing over quantum linkages.