The folks at HiRISE have released another interesting and beautiful (false color) image of Mars. This time it's a crater that has, of all things, terraced walls. This may indicate that ice under the surface was vaporized upon impact, then condensed and rained back down, eroding the crater walls. 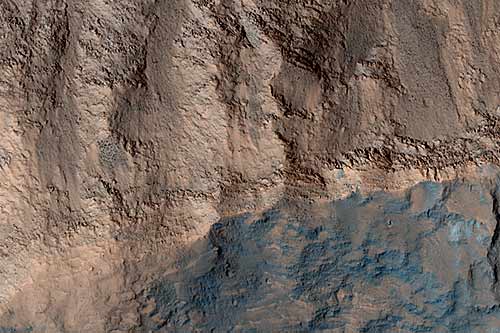 I wouldn't go so far to say that this indicates water on Mars, of course, since it's indirect evidence of transient liquid water. It's not even conclusive evidence of that. I've seen ditches on Earth that have eroded into terrace-like structures without rainfall; usually when the dirt has been compressed over time (like on the edge of a road) and there is some erosive force present like wind or even passing cars applying pressure and crumbling the ditch sides. There is more to this Martian story; debris on the floor of the crater looks like something was flowing, which adds to the idea of water. Maybe. Still, it's interesting, and worth putting into the category of "pictures motivating us to continue looking for water." Also, the full scale image shows the terrain in context, with lovely entrained sand dunes on the surface as well. Tip o' the Martian umbrella to Steven Charles Raine for sending me this.