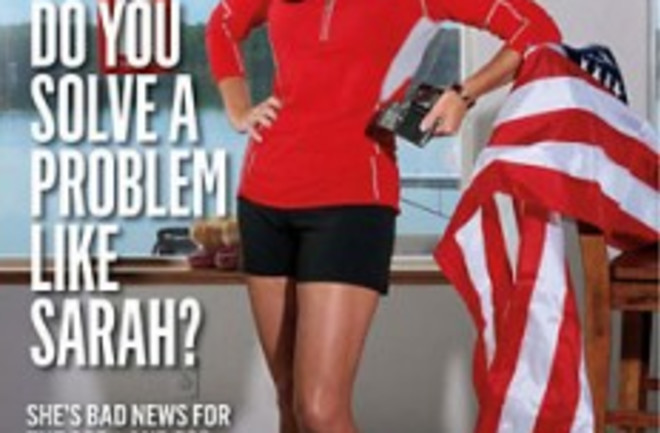 If you haven't already heard, Sarah Palin is the current cover girl of Newsweek. Fair enough--she has a new book out. But the magazine chose to use a photo originally taken for an August 2009

health and fitness. Runner's World claims the picture was provided to Newsweek

without Runners World’s "knowledge or permission"

by the photographer’s stock agency. There has already

been a good deal of commentary, some glee, and even

speculation it was intended to rally conservative support for 2012. But for once, I agree with the former governor. Her statement on mirrors my reaction:

The choice of photo for the cover of this week's Newsweek is unfortunate. When it comes to Sarah Palin, this "news" magazine has relished focusing on the irrelevant rather than the relevant. The Runner's World magazine one-page profile for which this photo was taken was all about health and fitness -- a subject to which I am devoted and which is critically important to this nation. The out-of-context Newsweek approach is sexist and oh-so-expected by now. If anyone can learn anything from it: it shows why you shouldn't judge a book by its cover, gender, or color of skin. The media will do anything to draw attention -- even if out of context.

I am extremely disappointed in Newsweek for pulling a fraternity-prank-like stunt. Yes, I strongly disagree with Palin's political views about almost everything, but that does not make their decision acceptable. Choosing an out-of-context image is not only dubious, but a manipulative move, unworthy of the magazine. Misrepresentation may indeed sell well, but it comes at the cost of integrity. In the broader context, I am sick of this sexist nonsense. How are we to encourage more women to consider a career in politics when the media casts every female as a 'pin-up' or 'bitch' with no middle ground? As I've written in the past, while candidates should never be chosen based on a number of X chromosomes, it would benefit everyone if women became more involved in the decision-making process given we represent about 50% of the population. The way Clinton and Palin were treated in 2008 made Washington seem like a boys club. I often wondered how many girls might be completely turned off to politics by watching the unrelenting onslaught of ogling, sexy photo-shopping, and worse that ensued from across the aisle. And so, with many miles to go toward achieving an equalvoice in America and around the world, Newsweek's latest faux pas sets us back.