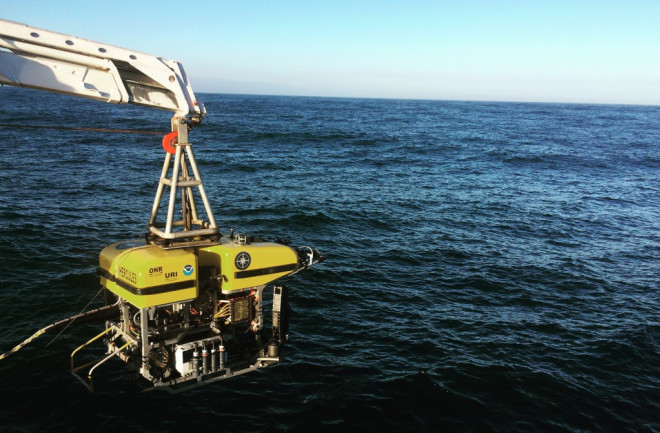 The following is one article in a series of dispatches from the E/V Nautilus. I served as a participating scientist on the Central California leg of the 2016 expedition; live footage of the Nautilus' continuing exploration on the seafloor can be found at www.nautiluslive.org.

During the Central California leg of the Exploration Vessel Nautilus’ 2016 season, our team of scientists and engineers explored previously unseen portions of the ocean, streaming the video live around the world. It’s pretty amazing, really – the idea that anyone with an internet connection can watch as new areas of our planet are seen for the first time. Armchair explorers are on the front lines like never before, offering crowd-sourced input half a world away. The Nautilus is operated by the Ocean Exploration Trust, a non-profit dedicated to “pure ocean exploration.” This remit is increasingly rare in today’s competitive funding environment, where federally funded scientific expeditions are designed around well-reasoned hypotheses, clear objectives, and attainable sampling agendas. While the strategy at play is understandable – one would hope that government funding is mobilized in the most productive way possible – truly exploratory work is left on the sidelines. Of course, hypothesis-driven study and exploration are two sides of the same coin, equally essential ingredients of a robust research landscape. You can’t study what you haven’t yet found, and in-depth experimentation at previously visited sites reveals new layers of knowledge: a diminutive microbe that could represent a key branch point on the tree of life, or plumes of trace elements, spewing forth from hydrothermal vents to fertilize the oceans. As the tip of the scientific spear, the Nautilus and her Corps of Exploration seek out new questions to be chased down by the scientific community, providing an appetizer of what could become a grant-funded main course in the coming years. Supported by a network of “scientists ashore,” the handful of scientists on board are emissaries, soliciting input from experts tuning in from around the world. It can be challenging to negotiate the diversity of science requests – sampling a rock for argon-argon dating is very different from preserving it for DNA analysis – but the mix of expertise on board the Central California leg meant that we were particularly adaptable. So when 20-foot seas and 50-knot winds thwarted plans A, B, and C, there was still good exploratory science to be done. We made our way to the Santa Barbara Basin, the relatively calm patch of water between the Channel Islands and the coast; due to some ocean circulation idiosyncrasies, it’s also a well-established oxygen minimum zone, unable to sustain large populations of big animals. Despite its proximity to shore – and a long history of geochemical studies – the basin’s open water biology had never really been observed in its natural state. And that’s because of the sheer scale of the water column, the vast expanse extending from the bottom edge of the photic zone to the seafloor. According to Amanda Netburn, a Knauss Fellow with NOAA’s Office of Ocean Exploration and Research, “the water column is the largest ecosystem on the planet, but also one of the most poorly explored parts of the planet.” Most biological surveys collect samples with nets, an approach that minimizes cost and increases throughput, but “many animals, particularly fragile gelatinous animals, are destroyed” in the process, says Netburn. As Nautilus’ remotely operated vehicle slipped beneath the waves and into the darkness, we were primed to see a new dimension of the basin and the animals that inhabit it. During the several-hour transect, we observed otherworldly creatures drifting through constellations of marine snow (the organic-rich particles falling slowly from surface waters into the depths). Comb jellies reflected a shimmering rainbow back at the ROV’s cameras; hovering ropes of colonial jellies, often dozens of meters long, extended beyond the headlights. For Netburn, however, the most surprising observations came at the seafloor. “We saw many deep sea smelts (Bathylagidae) taking bites of the sediment,” she recalls, “and at nearby methane seeps we saw hatchetfish (Sternoptychidae) taking bites of the bacterial mat. Both of these are typical open ocean animals, and aren’t thought to interact with the seafloor." "These behaviors haven’t really been documented before.”