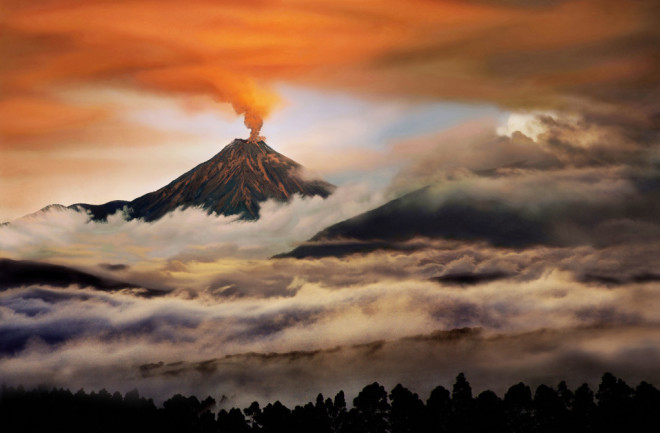 Tungurahua volcano eruption, Ecuador, South America. LOOK/Alamy Last year I published a paper with Sally Sennert (Smithsonian-USGS; she compiles and writes the Weekly Volcanic Activity Report) and Deanne Bird (Risk Frontiers) on how social media can be used effectively to disseminate information about volcanic eruptions. One thing that was a result of this paper was a list of all the Twitter accounts I could find that were run by volcano observatories and volcano monitoring agencies. Now, that list is already a little out of date. But I thought it would be fun to show you my top 10 volcano monitoring Twitter accounts (and let me tell you, Central and South America are showing the world how it's done). If you're on Twitter, be sure to add these. If you're not, you can still check out their feeds to see up-to-the-second updates of volcanism. (You can also follow me to get volcano news as well: @eruptionsblog) (presented in no particular order)Alaska Volcano Observatory - @alaska_avo The Alaska Volcano Observatory keeps everyone in the know whenever an Aleutian (and sometimes Kamchatka) volcano starts making noise (or settles down). They also do a great job with reminding us about some of the historic eruptions in Alaska over the years.

Need to keep track of volcanoes like Sabancaya, Ubinas, or El Misti? The IGP account is filled with pictures of current observations from volcanologist or the IGP webcams.

A bit more of an informational account than one with lots of pictures, PHILVOLCS keeps us appraised of the many earthquakes and eruptions across the Philippines.

The Indonesian volcano observing agency, the PVMBG has a very active account that offers lots of information of the outreach they do for communities near the many volcanoes of Indonesia, along with lots of updates on the activity across the archipelago.

Instituto Nacional de Sismología, Vulcanología, Meteorología e Hidrología (INSIVUMEH) - @insivumehgt With all the activity across Guatemala, INSIVUMEH has its work cut out as they handle all the volcanoes, earthquakes and weather across Guatemala. Look for lots of information each day with updates across all those fronts.

Instituto Geofísico - EPN - @igecuador Another agency that tackles both the earthquakes and volcanoes of a country, the IG-EPN has all of Ecuador's volcanoes under its domain, including Tungurahua, El Reventador and Cotopaxi.

GeoNet - @geonet GeoNet is the hazard monitoring apparatus for New Zealand, run jointly by GNS Science and the Earthquake Commission. They have plenty of updates from the volcanoes across New Zealand and into the Kermadec Islands (and occasionally post some of the most astounding t-shirts ever).

SERNAGEOMIN - @sernageomin The Chilean geologic survey does an excellent job of keeping all of us appraised on the many active and quiet volcanoes of Chile. Combine that with the Chilean disaster management agency (@onemi) and you've got all the information you could need whenever a Chilean volcano gets restless.

The SGC (the new incarnation of what was called INGEOMINAS) tweets about the many restless volcanoes of Colombia, including Nevado del Ruiz near Manizales and Pereira and Galeras near Pasto. They also tackle a lot of earthquake information and outreach to the citizens of Colombia.

US Geological Survey (USGS) - @usgs Talk about a catch all account, the USGS Twitter feed has everything that the Survey does, from volcanoes to wildlife. Now, it would be great if each of the volcano observatories (like Hawaii Volcano Observatory or the Yellowstone Volcano Observatory) had their own accounts, but if anything is happening at the volcanoes of the US, look for information on the USGS account. They also have some great historic content as well.

Hawaii Volcanoes NP. Shelter hut on the verge of the pit of Halemaumau Crater. 1902. #USGSHistorypic.twitter.com/l4RRqEbfbC

Did I miss any of your favorites? Add them below so we can see who everyone is following on Twitter to follow volcanic eruptions. //