If There's Life on Mars, We Might Not Recognize It 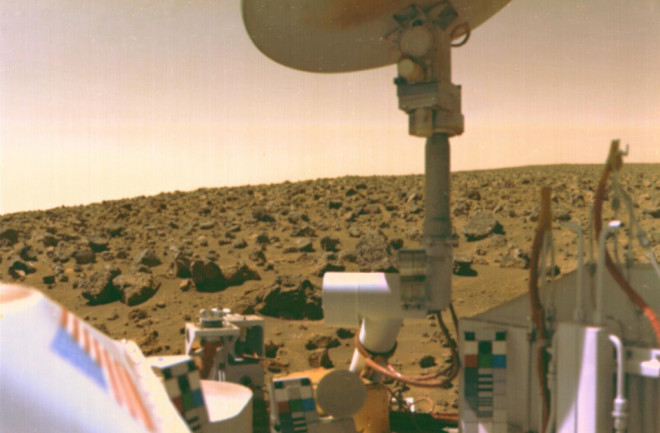 Image of Mars from the Viking 2 lander. (Credit: NASA) The search for extraterrestrial life has expanded far beyond the bounds of the solar system and to the hordes of exoplanets circling foreign stars, but the search is far from over on the planet next door to us. Mars beckons as a potential source of life not only because it is nearby and easy to study, but also because of evidence that water once, and perhaps still, flowed across its surface. In addition, organic compounds, although likely not of biological origin, have been discovered in the soil on Mars, which means the building blocks for life could already be there.

Still, the mere presence of organic material is a far cry from biological life. And, if life does exist on Mars, it would have to deal with conditions far more extreme than almost anywhere on Earth, meaning that what might be sufficient for life here wouldn't fly on the Red Planet. Life on Mars might look so different that we wouldn't even recognize it. If life on Mars was the result of a "second genesis," that is, it began completely separate from life on Earth, it might use combinations of organic chemicals we've never seen before, and wouldn't know to look for. Indeed, we may have actually discovered life on Mars decades ago. When the Viking landers arrived in 1976, they carried out a series of experiments to test for life, all of which came up negative. But were we performing the right experiments? Joop Houtkooper, of the University of Giessen, thinks we may have unwittingly destroyed the life we were trying to find. He hypothesizes that potential lifeforms on Mars could deal with the extreme cold by incorporating hydrogen peroxide into their biology — by mixing it with water, they would avoid freezing and be able to survive on Mars. Hydrogen peroxide is anathema to life on Earth — that's what makes it a useful disinfectant — and may be why researchers never thought to search for it.

A cutaway visualization of the azotosome theorized by Cornell researchers. (Credit: James Stevenson/Cornell) During one of the Viking lander's experiments, it briefly detected a weak positive signal, which then disappeared. Houtkooper thinks that this blip was the result of researchers adding water to their experiment, a step that would have killed any hydrogen peroxide-based lifeforms. Testing for specialized lifeforms such as those hypothesized by Houtkooper would require a specialized experiment, as well as another rover trip to Mars. Such a trip is probably not going to happen any time soon. Houtkouper's theory has been criticized by other scientists, and no hard evidence of hydrogen peroxide bacteria has emerged. But Houtkooper's theory hints at an important consideration when searching for life beyond Earth: We shouldn't base our assumptions about extraterrestrial life on what we observe on Earth. The concept of expanding our search for life beyond the rules of Earth's biology is gaining traction. Last year, a team of Cornell researchers created a hypothetical virus-like organism they called an azotosome, which they said could live in the methane seas of Saturn's moon Titan. Using compounds derived from methane, the researchers described a way to create a liposome — a barrier surrounding cells that's necessary for their survival — that could lead to biological life well-adapted for Titan's minus 290 degrees Fahrenheit climate. While their azotosome is purely theoretical, the chemistry holds up, they say, meaning there's a chance it could exist. While hydrogen peroxide bacteria and azotosomes are just theories, they both hint at an important consideration for astrobiology: Life beyond Earth may look wildly different on the Red Planet, and we might not even know what we're looking for. By dreaming of biological organisms that break all of the rules of life on Earth, we may bring ourselves a step closer to actually finding them elsewhere.

This story is part of an ongoing series about Mars this summer in partnership with Astronomy magazine. See more Martian stories by visiting our Summer of Mars hub page.