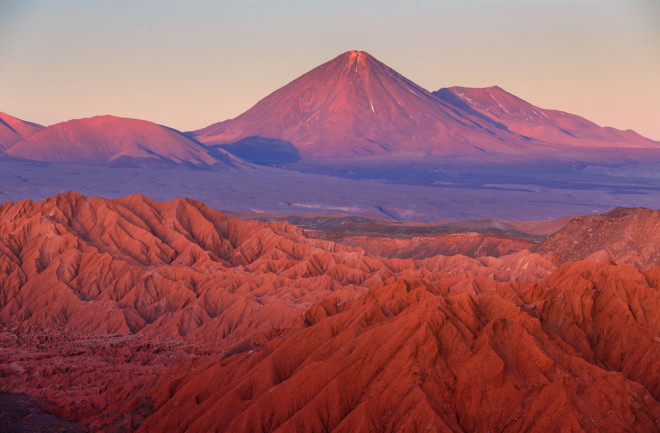 (Credit: Shutterstock) Life finds a way, even in the most inhospitable conditions. In extreme environments such as that present in the hyper-arid center of the Atacama Desert, there are still signs of life. In the most Mars-like location on Earth, a microbial community survives, showing episodic biological activity in the near absence of any moisture. In dry areas at of the desert's core, where everything is bombarded by intense ultraviolet radiation, Dr. Dirk Schulze-Makuch and his colleagues detected microbes that were not only active but reproducing. And, as the thinking goes, if life finds a way here there's a good chance it can find its way on the Red Planet. The study, published Monday in the journal PNAS explains the significance of life establishing roots in such an unforgiving place. Theory used to hold that organisms found in the most desolate parts of the Atacama were simply unlucky micro-hitchikers deposited there by the wind. But this latest study shows that, far from dying in the Atacama, many of these microorganisms are forging new generations in a hellish landscape. “What we’re showing is that there’s actually organisms that live there and reproduce, so the area is actually transiently, at least, habitable,” says Schulze-Makuch. As researchers approached the epicenter of the Atacama, bacterial populations became sparse. Species that were found in the wetter areas were nowhere to be seen in these driest parts. It’s likely that environmental selection and genome specificity had a role in filtering and shaping the microbial community as the landscape grew more unforgiving. Many of the organisms dwelling near the surface were had adapted to UV radiation and desiccation. Deeper down, they found bacteria that had adapted to the high salt concentrations present in the soil. It was thought that Archaea—an ancient form of bacteria—were more capable of withstanding extreme conditions and hardship. However, the samples indicated that bacteria mostly populated these areas, which means they are hardier than we've given them credit for. The main problem they face is the lack of water, but they can do without it for a considerable amount of time. During high and dry periods, the bacteria go into a dormant state, and only reawakened following access to water via rain or fog.

“This is of course very relevant if you have an environment that is say, on Mars, where it is a tick more dry,” says Schulze-Makuch. On Mars, there’s also occasionally some moisture, typically from snowfall to fog. “This is a direct analogy of what we have in the Atacama Desert. It makes it, in our view, also more likely you have life on Mars and that life can hang in there.”

Given Mars' wet history, the transformative forces of evolution and logical intuition, it's not exactly going out on a limb to predict life might find its way on Mars. “We know very early on, 4 billion years ago, there was much more water on Mars. We know from the curiosity rover there were still lakes 2.8 billion years ago. Early on they had water, so the organisms on Mars, microorganisms, if they exist, they would have adapted slowly to drier and drier conditions,” explains Schulze-Makuch. “So if you have these kind of things that are equipped with what would be sufficient to ensure microbial survival if they are there. We can’t really say that they are there now, but our research suggests that it’s a possibility, then they could still be there.” In the next couple of weeks, the team is headed back to the Atacama Desert to study how organisms adapted to such a harsh environment. On a separate, but related, grant project supported by the European Research Council, Schulze-Makuch is also testing how samples from the Atacama Desert fare under simulated Martian conditions. Meanwhile, the durable Atacama Desert bacteria are hanging tight, awaiting the next major rain event. Although they’re not exactly flourishing in the current state of affairs, they can still make a living there, which is all anyone can really ask for.