Iceland's Largest Volcano Is Getting Restless 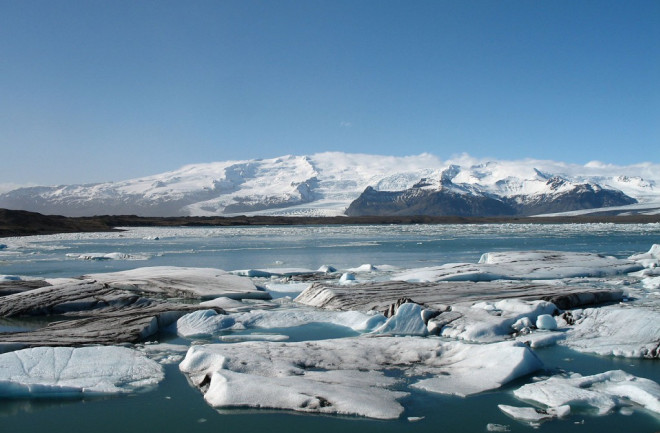 The giant Icelandic volcano Öræfajökull behind Jökulsárlón, a lake created by the meltwater of the Vatnajokull ice cap. Martin Peeks / Wikimedia Commons. For being an island in the North Atlantic, Iceland has a lot of volcanoes. Some of them generate a lot of anxiety when they have the inevitable rumbles. An earthquake swarm at Katla or Hekla causes all sorts of media alarms to go off, which is surprising considering the last three eruptions in Iceland came from Barðarbunga (well, the Holuhraun field, in 2014-15), Grímsvötn (in 2011) and Eyjafjallajökull (in 2010). There is plenty of volcanic unrest in Iceland to spread around in this geologically unique landscape. Right now, it is

that has the attention of the Icelandic Meteorological Office, which monitors volcanoes in Iceland. Never heard of Öræfajökull? Well, that's OK because it (a) is buried under ice and (b) hasn't erupted since 1728.

However, when it erupts (at least when we know it has erupted), it really erupts. The last two known eruptions have been a VEI 4 (1728) and a VEI 5 (1362), both of which were explosive eruptions from under the ice. The caldera that caps the volcano is partially underneath the Vatnajökull ice cap, which also covers nearby Grímsvötn and on the far side, Barðarbunga.

The eruption in 1362 was the largest explosive eruption in Iceland since it was settled, and unlike many of the eruptions that produce basaltic lava (runnier lava), it erupted high silica rhyolite (sticky, viscous lava), leading to its violent style of eruption. In total, ~2.3 cubic kilometers of volcanic debris were erupted during a blast that reached 30 kilometers (~98,000 feet). Along with that came pyroclastic flows and volcanic mudflows (lahars) that swept down from the volcano, destroying early Viking settlements on the island.

The eruption in 1727-28 (see below) betrayed the dual nature of Öræfajökull. Instead of a big, explosive eruption, it was dominated by trachyandesitic lava flows under the ice that produced large jökulhlaups (glacial outburst floods).

The 1727 eruption of #Öraefajökull also produced a debris and ice-laden flood that the locals called 'black glacier' #Iceland#Volcanopic.twitter.com/MKgrf8lpyf

A new bout of earthquakes, along with a depression in the summit icecap and a conspicuous sulfur odor near the volcano, has prompted the IMO to move Öræfajökull to an yellow alert

. The depression in the ice is already ~25 meters deep according to an overflight on November 18

. These changes have occurred since a M3.4 earthquake occurred

near the volcano in early October. However, this change in status is more due to the the lack of additional details at the volcano than fear it will erupt soon. But, as you can see below, 2017 has been a much noisier year, seismically, than usual at the volcano.

Now, this isn't the first swarm the volcano has experienced as of late. As recently as 2015

, Öræfajökull experienced a similar uptick of seismicity. However, repeated swarms like this might suggest that magma is continuing to fill the magmatic system under the ice caps. The IMO has installed more seismometers

around the volcano to keep track of all these earthquakes. We really don't know how many swarms might happen before an eruption occurs, or how large the eruption could be, or even if it will be an explosive eruption or lava flows. You can check out a great summary of what might be at stake during an reawakening

of Öræfajökull by volcanologists who study the volcano. This unrest bears careful monitoring, but don't be panicked about anything at the Icelandic volcano.