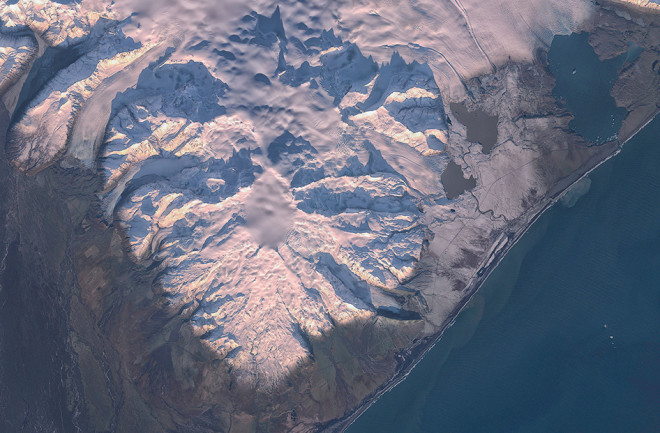 Copernicus Sentinel-2B image of Öræfajökull in Iceland, seen in 2017. ESA-Antti Lipponen. Over the past few days, news out of Iceland is that Öræfajökull, one of Iceland's largest and most powerful volcanoes, is getting restless. The volcano is "accumulating magma" and an eruption was coming! It sounds bleak, doesn't it? The volcano that produced the island's largest known explosive eruption is showing signs that 291 years of relative quiet might be coming to an end. Even the most recent eruption that occurred in 1727 was a VEI 4, which is pretty large for an eruption. More importantly, the eruption caused multiple glacial outburst floods (jökulhlaups) that formed as the snow-and-ice cap on the volcano melted from the heat of the escaping volcanic debris. So, should we be panicked? The answer is a resounding "no". The evidence of Öræfajökull restlessness is a list of things that happen at many Icelandic volcanoes that aren't necessarily heading towards an eruption in the near future (defined here as days to weeks, possibly months to years). This includes the snow-and-ice cap sinking in the middle of the caldera at the summit of the volcano over the past few years, likely a sign of heat within the caldera. There has also been deformation of the volcano itself as it "puffs out" like a balloon due to magma filling in underneath at a depth of ~ 5 kilometers beneath the surface. There has also been an increase in earthquakes at Öræfajökull over the past year, again most likely related to both magma intruding below the surface and changes to the hydrothermal system pumping water around near the surface as it heats up. The Icelandic Meteorological Office is right to warn people to, at the least, make note of these changes. They will be watching the volcano more closely as these signs of activity at Öræfajökull continue. However, the timing between signs of activity, like inflation and heating, and an eruption are not well known -- and many times, they might not lead to any significant eruption. Heck, almost a year ago, there was a flurry of over-the-top headlines related to activity similar to this at Öræfajökull, but no eruption has come yet. This is not to say that we're in the clear. It does appear that we might be in a period when an eruption might be more likely, but volcanoes recharge with magma for years to centuries (or longer?) before eruptions happen ... and each volcano might have different periods between eruptions (or no pattern between them!) This is the real challenge of volcanic forecasting: volcanoes can be restless at this level for a long time and eventually do nothing, or they might suddenly go wild and erupt quickly -- yet another reason why thorough monitoring of all volcanoes perceived as threats is vital to protect life and property. Here in the United States, the USGS just released an update of potential volcanic threats from volcanoes in the country. Eighteen of those are "very high threats", but even the ones in the lower 48 states are lacking in complete coverage beyond Mount St. Helens. Although the Cascade volcanoes might seem quiet now, they could change quickly and we could be caught off guard without adequate monitoring -- which takes money and expertise. We're a long way from being able to make precise predictions of volcanic eruptions, like saying "Mt. Mookie will erupt in 28 days". However, modern monitoring techniques are letting us know a lot further in advance when a volcano starts to show signs that things are changing. The next step will be trying to connect when those changes mean an eruption is around the corner and when they are just a volcano doing what volcanoes do between blasts.