Iceland: The Real Land of Fire and Ice 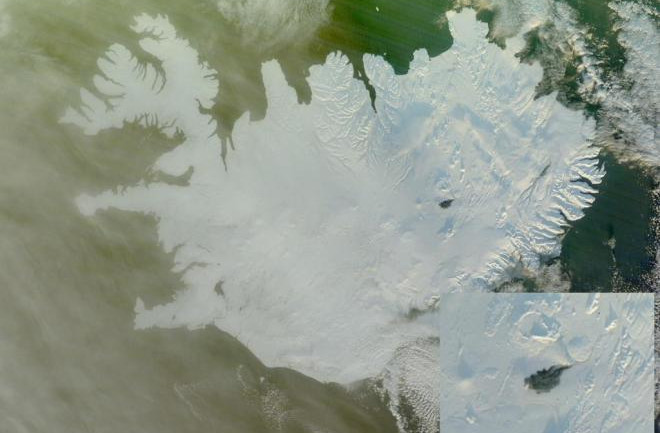 A NASA MODIS image of Iceland covered in snow seen on January 18, 2015. The inset shows a close up of the Holuhraun lava field (the dark smudge in the center-left of the main image). Photo by NASA, courtesy of the Icelandic Meteorological Office and University of Iceland. This week is a very Icelandic week here on Eruptions. Yesterday, we had the answers to your questions about the 1783 eruption of the Laki fissures and today we have an amazing image capture the contrasting personality of the North Atlantic island. This NASA/MODIS image taken on January 18 shows the entire island of Iceland covered in snow save for one spot near the middle - the active lava flow field at Holuhraun! Not only does this image show Iceland's fire and ice, but also the scale of such a large eruption. That dark spot is roughly the size of Manhattan Island (according to the latest Icelandic Meteorological Office estimates, ~84 square kilometers / 32 square miles.) Even five months on since the start of the seismicity that lead to the eruption, 50-70 cubic meters (1765-2472 cubic feet) of lava is erupting

That's over 4.3 million cubic meters a day (~0.004 cubic kilometers) - and this RT video of the vent shows the torrent of lava being erupted. Constant earthquakes in the area suggest that the eruption isn't likely to wrap up anytime soon. An EO-1 image of the lava flow field from January 15 (see below) shows the active vent (in bottom left) and the sprawling network of lava flows and breakouts at the edges of the flow. The lava that is erupting on the edges of the flow are likely traveling through tube systems that have been built in the lava flow field, insulating the lava from the cold air. This allows lava erupting at the vent to travel all the way down to the tip of the flow field (top right) almost 20 km (12 miles) away. If you haven't seen this video from John Stevenson where the lava flow is sampled with a shovel, you really should to get a sense of how these flows move.

The Holuhraun lava field, seen by EO-1 on January 15, 2015. Photo by NASA/IMO/University of Iceland.A new map released by the IMO shows how the lava flows have been following the topography downslope and that distant tip of the flow filling the former channel of Jökulsá a Fjöllum. When lava flows fill channels like this, sometimes you end up with inverted topography as the cooled lava in the channel is more resistant to erosion that the outwash deposits around it. Not all of the lava field is active at the same time, either. In fact, the scientists monitoring the eruption were able to helicopter in a save a couple FutureVolc sulfur dioxide monitoring instruments that were trapped by the advancing lava earlier in the eruption. And just when you thought we might have survived this eruption without an overly complex Icelandic name, it appears that "Holuhraun" (and the lesser used "Nornahraun") may not be around for long. According the Icelandic law, local residents will be able to name this new lava flow field. We'll have top stay tuned to see what the folks in Mývatn decide to call this impressive volcanic feature.