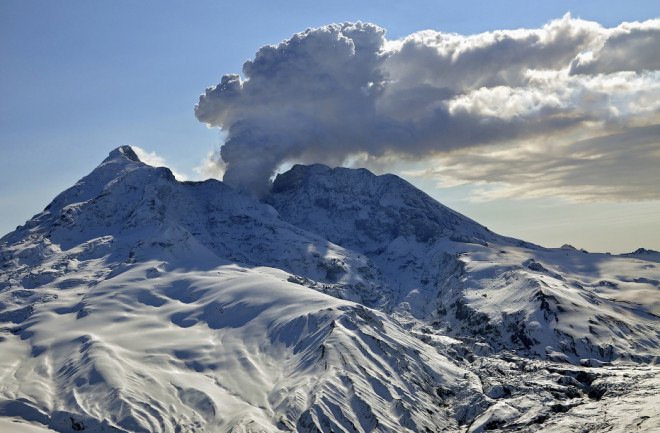 Redoubt Volcano. Alaska Volcano Observatory/Getty Images Last week, IBM announced with much fanfare that it will try to enter the earthquake-and-eruption-prediction game. Winning at that game could be incredibly valuable ... but it isn't really one you want to join in on. That's because geoscientists still don't understand the complex nature of what exactly triggers volcanic eruptions (and earthquakes, to a lesser degree). All the events that lead up to an eruption happen underground, far beneath our feet, so we've never observed them directly. And without that data, it's hard for any model to get it exactly right. IBM and collaborators recently won the Gordon Bell award for the most elaborate (and potentially accurate) models of the flow of the Earth's mantle. Their hope is that the motion of the plates predicted by Watson's models will offer clues to when and where earthquakes and eruptions will happen. Although that all sounds reasonable on the surface, it really oversimplifies plate tectonics too much to be useful. The Earth's mantle (which we've never actually drilled into) is a layer of iron-and-magnesium-rich rocks that sit beneath the crust. The top 100 kilometers or so---the lithosphere---is solid, and along with the crust it defines the Earth's tectonic plates. Beneath that layer, the mantle becomes plastic (no, it isn't molten), so it can flow horizontally and vertically. Scientists think there are places where the mantle rises and places where it sinks, mainly based on heat, and that the currents in the mantle might help drive the motion of the plates. In theory, the motion of the plates---grinding past or moving away from each other---should be the root cause of earthquakes. So modeling how the plates move and where stress might build based on mantle flow could help us better predict where (and when?) earthquakes could happen. But volcanic eruptions are much trickier, because they're not directly tied to mantle flow. The rise of mantle or the subduction of old oceanic crust can help generate magma, but then the magma has a life of its own as it rises through the crust. What exactly causes that magma to erupt is likely a mix of the supply rate of the magma under a volcano, the local stresses the volcano feels, the gas content of the magma, how crystalline the magma might be, and any number of other parameters. Right now, we're still far from longterm (months to years) predictions of exactly when a volcano might erupt. Now, the IBM team doesn't think they can predict just yet. But somehow by feeding a pile of data into Watson, the company thinks the supercomputer will be able to find the patterns in the tectonic noise that we have missed so far. For that to work, though, we'll need to feed an immense amount of data that we don't even have the ability to directly collect. The information those models really need require sensors that collect information on the stresses in the crust, or the gas content of magma far below the surface, or the temperature of magma that is mixing with a crystal mush under a volcano. Unlike the weather analogy given in some of the articles reporting on IBM's plans, geologic prediction isn't going to be as easy as reading a bunch of sensors, because those sensors need to capture events going on deep underground. We might be able to add a pile of sensors at the surface, but in order to really understand (and then predict) the behavior of magmatic systems, those sensors will need to be put closer to the magma itself as it percolates kilometers underground. Throwing up a weather station, this is not. In a sense, geologic systems are some of the hardest for us to understand because of the nature of the Earth's geologic processes. We get to glimpse their manifestation at the surface or possibly get some second-hand evidence of events happening deep underground. However, as of today, the Earth deeper than maybe a dozen kilometers is more inaccessible to humans than the surface of Pluto. We need to keep dreaming big as geologists to run experiments like the IBM mantle model or the EarthScope Array to help us get at some of this mystery locked within our planet. Watson may not be able to predict that next big eruption, but it might be able to help us another glimpse the inner workings of the planet on which we reside.