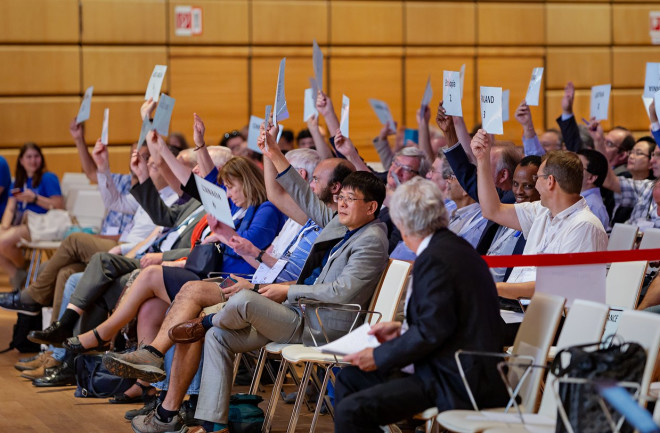 National Members of the IAU vote at the 2018 General Assembly (not related to the Hubble–Lemaître law). (Credit: IAU/M. Zamani)

The Hubble law has a new suggested name, as members of the International Astronomical Union (IAU) have voted to recommend that the law now be known as the Hubble-Lemaître law.

The Hubble law, as it is typically known, describes the effect in which objects move away from each other with a velocity proportional to their distance in an expanding universe. The IAU is an international association of professional astronomers with authority over naming celestial bodies. And among the public, they’re best known for the 2006 vote that demoted Pluto from planet to dwarf planet. But unlike that official change, this latest vote is a recommendation that the astronomical community start using the new name to honor both Edwin Hubble and Belgian astronomer Georges Lemaître. Hubble and Lemaître were both instrumental in developing the law and contributing to our understanding of the expanding universe. “One of the IAU’s roles is to foster exchanges of views and international discussions — and it strives to contribute to scientific discourses with historical facts. To honor the intellectual integrity and the supremely significant discovery by Georges Lemaître, the IAU is pleased to recommend that the expansion of the Universe be referred to as the Hubble–Lemaître law,” an IAU statement reads.

The resolution to suggest renaming the law was presented and discussed at the IAU’s 2018 General Assembly in August. All 13,000-plus individual and junior members of the IAU were invited to vote on recommending the name change. 78 percent of the votes are in favor of the name change, 20 percent are against it and 2 percent abstained from either option.

Piero Benvenuti is the former IAU General Secretary. In an email, he says the IAU vote is like a doctor recommending that patients stop smoking: They can’t actually force anyone to stop.

Hubble’s name has gained international recognition for his contributions to the law and also because of the Hubble Space Telescope. But in 1927, before Hubble made his contributions, Lemaître actually first came up with the idea of an expanding universe, represented it mathematically and connected it to Einstein’s theory of General Relativity. Lemaître, while he was first, received little attention for his ideas at the time.