I Used to Be A Moth Assassin. This is How I Fell In Love With Them 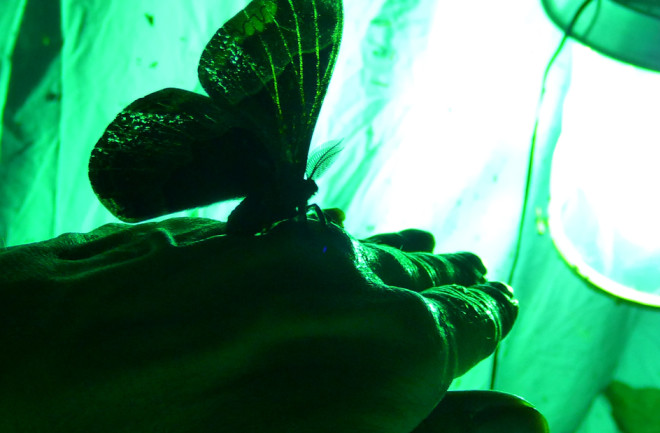 Photo credit: Sandra Lanman Turn on your porch light at night and bring out your inner citizen scientist. Record observations of moths for National Moth Week and help scientists understand these unique Lepidopterans. Guest post by Sandra Lanman I used to be a moth assassin. I’d grab the swatter or scream for my husband whenever one fluttered erratically inside the house. Either way, that critter would not make it out alive. Then I met Dave Moskowitz and Liti Haramaty. I would be “saved,” and so would a lot of moths. For years, I’d hung around my town’s Butterfly Park and shot photos of beautiful swallowtails, monarchs, great spangled fritillaries, American ladies and more. I never considered that moths hung out there too. I once spent days trying to identify a lovely little Lepidopteran I’d photographed by searching butterfly websites. Finally, a friend found it on a moth site. It was an eight-spotted forester. I had no idea moths could be so cute. I first met Dave and Liti at the park, where we’d mostly talk butterflies. In 2011, they invited me to a moth night, promising I would have a blast. I was amazed. In the glow of mercury vapor lights, dozens of moths and other insects alighted on white sheets. Children were holding them, even putting them on their noses. No one had a swatter. Even I held a moth on my hand that night. In late 2012, Dave and Liti asked for my help. That summer, they had founded National Moth Week as a project of the nonprofit Friends of the East Brunswick (NJ) Environmental Commission. They envisioned a citizen science project observed during the last full week of July that encouraged people to “turn on a porch light” and contribute their sightings to partner organizations like Project Noah, Encyclopedia of Life, BAMONA and others. In its first year, National Moth Week exploded beyond the founders’ wildest expectations. Thanks to social media and their connections in the entomology and environmental worlds (Dave, an environmental consultant, is earning his Ph.D. in entomology at Rutgers and Liti is a marine researcher there), events were registered in 49 states and 30 countries. They knew I worked in public relations. Would I help them with communications? Of course! Being on the NMW team has been an extraordinary experience because we are engaging people of all ages in a new learning experience. Moths have barely gotten any positive notice outside the entomology community, and certainly got little respect from most people. NMW is changing that. National Moth Week invites people of all ages and abilities to learn about the beauty, diversity and ecological importance of these often maligned creatures. Their photos and observations add to the body of knowledge about Lepidoptera and scientists’ understanding about impacts of development or climate on their local habitats. Whether observing moths in their own backyards, or attending a local moth night, citizen scientists can easily become more knowledgeable about what to look for.

Hummingbird Moth (Photo Credit: Larry Lamsa CC BY SA 2.0 Wikimedia Commons) Social media has been a huge asset in spreading the word to new and experienced moth-ers. NMW is now growing organically, and we often learn about NMW events that are not registered on our site. We give all participants a certificate of participation and keep them informed about how it’s being celebrated around the world. Last year, Jacob Gorneau, 17, became our youngest team member, representing the young environmentalists we hope to inspire. National Moth Week has been featured on NPR’s Science Friday, in The New York Times, Washington Post and on many news sites. Among our biggest supporters are science media, bloggers and moth-aficionados out there encouraging citizen scientists to get involved. To keep it interesting, NMW focuses on a different family of moths each year. National Moth Week 2015 which runs from July 18-26 is the year of the Sphingidae family, which includes the commonly called hawk moths, sphinx and horn worms. The day-flying “hummingbird moth” is among the most interesting, and we hope to get a lot of sightings. This year, we began a campaign to have the Automeris io, symbol of NMW, designated the official state moth of New Jersey. If the pending legislation is successful, New Jersey would be the first – and hopefully not the last – to designate a state moth! “Moth-ers” of all ages and abilities are invited to register their own events or attend a nearby public event listed on the NMW website. Registration is free. Venues have included National Parks and Monuments; nature centers; state, county and local parks and recreation areas; museums, libraries and camps, as well as backyards everywhere. Every year, organizers get more creative, hosting “moth balls,” “malt, hops and moths,” “moth mania” events, and more. Needless to say, I am no longer a moth assassin. I’ve attended lots of moth nights and I’m planning to set up my own outdoor lights soon, so I can enjoy mothing whenever I want.

A former print journalist, Sandra Lanman has been a professional communicator for more than 25 years, working in the arts, higher education and public broadcasting. She and the rest of the National Moth Week team are all volunteers.