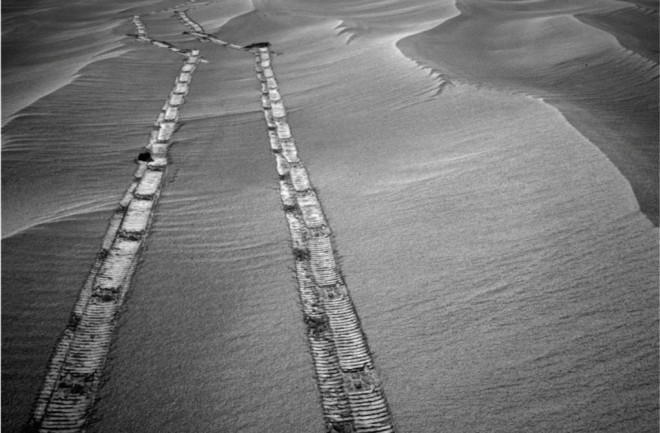 'Opportunity turned its camera back on the path it had traveled across the dunes of Mars in 2010. (Credit: <a href='https:

“Any man’s death diminishes me, because I am involved in mankind, and therefore never send to know for whom the bell tolls; it tolls for thee.” The quote is so familiar that most people have no idea where it originally comes from (I’ll admit, I had to look it up myself to be sure: It is Mediation XVII from John Donne’s Devotions upon Emergent Occasions.) In recent years, though, the words have taken on new meaning, at least for those of us who are devoted to astronomical exploration. Any space robot’s death diminishes us as well, it seems.

So it was with the Cassini spacecraft’s terminal plunge into Saturn in 2017; one popular Twitter feed, called @CassiniNooo, was devoted entirely to screaming “noooooo” as the final day approached. And so it was again earlier this month when NASA officially declared the death of the Opportunity rover, which had spent more than 14 years exploring Mars on what was designed to be a 90-day mission. The eulogies were passionate and moving. People also tried to make sense of why they were so upset. They offered a lot of plausible explanations, but I think they missed out on the most interesting one.

There is no question that people readily project emotions onto familiar objects–especially, but not exclusively, animate ones like a little Mars rover. I recall a time when, as a child of about six years old, I got profoundly sad when the family washing machine died. It had been so loyal, dutifully cleaning my clothes! The well-developed human sense of empathy, so useful for interpreting the motivations behind other people’s actions, is probably to blame for the sense of self that we imagine belonging to our cars, our appliances, and our spacecraft. And as science writer Shannon Palus notes, plenty of public relations managers are only too happy to activate our over-abundant empathy response.

That makes sense, but it’s not the explanation I’m thinking about.

The Opportunity rover is not just a mobile robot, it is a deliberate human analog. That activates an even higher level of familiarity. Opportunity moves through its environment, much as a person does. It senses its surroundings. It views the landscape through cameras that are mounted high, much like the eyes in your head. People naturally see faces in random patterns, a phenomenon known as pareidolia (which also has its own Twitter feed), and that’s especially true for objects like Opportunity which have direct analogs of human facial features. Rebecca Boyle evocatively writes about the rover’s “eyelike cameras” and “open, petlike countenance.”

It sure looks like a friend, right? A NASA illustration of Opportunity on Mars provokes instant empathy. (Credit: NASA/JPL/Cornell)

I agree, but that’s not the explanation I’m thinking about, either.

The connection between robot and human goes deeper still for the many scientists who worked with Opportunity and its mechanical twin, Spirit. For those scientists and engineers, the rovers were bona fide work colleagues. They made daily contact, they delivered reports, they collected the data that made Mars research possible. These days, many employees interact with their living work colleagues primarily through email and Slack chats. It’s no wonder that people can seem dehumanized, and that a long-serving robot like Opportunity can seem vibrantly alive.

Scott Maxwell, the former rover planning lead for the Spirit and Opportunity rovers, articulated this sentiment clearly in a recent story: “I loved Opportunity, as I did her twin sister Spirit. I was privileged to be part of a team that was ecstatically devoted to them for years. We sacrificed dinners with family, vacations, whole marriages, to those rovers. And they were worth it: in exchange, they gave us a planet. They were our eyes and ears, our remote robot bodies…”

Ah, now we are getting close to where I want to go.

Opportunity and our other space robots do more than activate our empathy for others; they actually feel like a part of ourselves. Some years ago, Carl Zimmer wrote a perceptive essay for Discover about the “extended mind” interpretation of human consciousness. In much the way that your glasses can become mentally attached to your eyes (mine certainly are) or a prosthetic limb can become fully integrated into the workings of the body, so our external information sources become integrated into our minds.

Philosophers Andy Clark and David Chalmers developed this idea in their influential essay, The Extended Mind, and it applies here very naturally. Opportunity was our eyes and ears, and our remote robot body, not just for the few engineers who had the privilege of operating it, but for anyone sharing in the information that it collected. The Opportunity rover acted as a human surrogate in processing the experience of being on Mars, and when that experience was delivered back to us it became a part of our own consciousness. Clark and Chalmers call it active externalism, and quip that “Cognitive processes ain’t (all) in the head!”

Mission controllers at JPL come to terms with their loss as they make the final attempt to contact Opportunity on February 13, 2019. (Credit: NASA/JPL-Caltech)

In this case, some of our collective cognitive process was on Meridiani Planum on Mars. When Opportunity went dark during a global dust storm, never to speak to us again, we lost something painfully personal. More than a cheerful simulacrum of ourselves. More than a source of enlightenment and fascination. More than a precious work tool.

What we lost was a part of our consciousness–a piece of our own mind. In the Clark and Chalmers view, that really was us (you and me) rolling around on the Red Planet for 14 years. That really was us swooping around Saturn and through the geysers of Enceladus with the Cassini probe. We lost those parts of ourselves, but fortunately we have gained many others. Now we are circling the asteroids Bennu and Ryugu, circling Jupiter, squinting toward faint specks in the Kuiper Belt.

For robots as for people, death gives meaning to life. In losing a piece of ourselves, we can savor more clearly the memories formed, and anticipate more knowingly the greater expansions of consciousness that are happening all around, even now.