Humans and Neanderthals had sex, but not very often 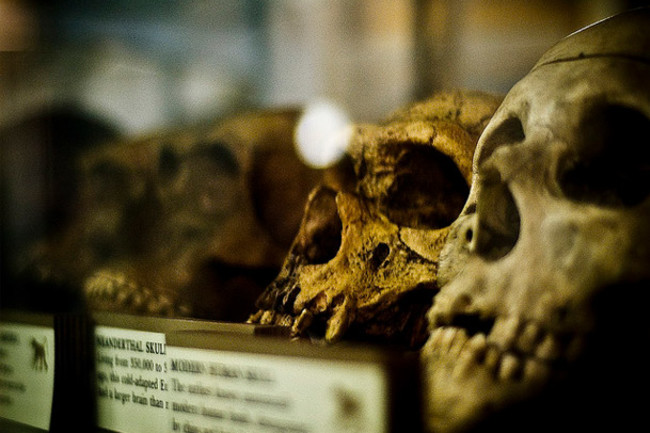 Tens of thousands of years ago, our ancestors spread across the world, having sex with Neanderthals, Denisovans and other groups of ancient humans as they went. Today, our genes testify to these prehistoric liaisons. Last year, when the Neanderthal genome was finally sequenced, it emerged that everyone outside of African can trace 1 and 4 percent of their DNA from Neanderthals.

The discovery was a vindication for some and a surprise to others. For decades, palaeontologists had fought over different visions of the rise of early humans. Some championed the “Out of Africa” model, which says that all of us descend from a small group of ancestors who came out of Africa, swept the world, and replaced every other group of early humans. The most extreme versions of this model said that these groups never had sex, or at least, never bred successfully. The alternative – the multiregional model – envisages these prehistoric groups as part of a single population that met and mated extensively.

To an extent, these are caricatured versions of the two models, and there are subtler variants of each. Still, early evidence seemed to support the extreme Out of Africa version. When scientists sequenced the mitochondrial genome of Neanderthals (a small secondary set of genes set apart from the main pack), they found no evidence that any of these sequences had invaded the modern human genome. The conclusion: Neanderthals and humans never bred.

The full Neanderthal genome disproved that idea, but it also shifted the question from whether humans had sex with Neanderthals to just how much sex they had. As I mentioned in New Scientist earlier this year, modern humans were spreading into areas where Neanderthals existed. “It doesn’t necessarily take a lot of sex for genes from a resident population to infiltrate the genomes of colonisers. When an incoming group mates with an established one, the genes they pick up quickly rise to prominence as their population grows.”

Now, Mathias Currat from the University of Geneva and Laurent Excoffier from the University of Berne have weighed into the debate. They simulated the spread of modern humans from Africa and their encounters with Neanderthals throughout Europe and Asia, to work out the levels of sex that would have transferred Neanderthal genes to modern genomes at their current level.

The duo concluded that sex between the two groups was somewhat of a fringe activity. Fewer than 2 percent of the possible sexual encounters at the time happened between a human and a Neanderthal and produced a fertile, healthy hybrid child. That’s a conservative estimate – the true odds might have been even lower. “Such interbreedings were strongly prevented or very rarely successful,” says Excoffier.

Even if the odds of successful interbreeding were just 5 percent, Neanderthal genes would make up the majority of the human genome today. As it is, a lack of viable sex explains why none of the Neanderthals’ mitochondrial DNA made its way into modern humans, and why so little of their main genome did.

Currat and Excoffier suggest that either modern humans and Neanderthals didn’t have sex very often, or their hybrids weren’t very fit. They favour the first idea. According to their model, it would only have taken between 197 and 430 liaisons between ancient humans and Neanderthals to fill 1-3 percent of modern Eurasian genomes with Neanderthal DNA. Considering that they two groups probably interacted for 10,000 years or so, it would have been enough for one human to sleep with one Neanderthal every 23 to 50 years.

Reich is more interested by the duo’s other conclusion: that Neanderthals and humans continued to mate, albeit rarely, throughout Europe and Asia, all the way from Spain to the Himalayas. This contrasts with Reich’s own work. When he published the Neanderthal genome with Svante Paabo, they suggested that the two groups only bred when humans moved out of Africa and encountered Neanderthals somewhere in the Middle East. This explains why everyone in Europe and Asia has the same level of Neanderthal genes in their DNA – their ancestors picked up those genes only once and spread them to all their descendants.

Currat and Excoffier’s conclusions are clearly different. Paradoxically, they suggest that Neanderthal-human sex was less successful and probably rarer, but also more widespread. There’s an easy way to find out which idea is correct. If Currat and Excoffier have it right, then Europeans and Asians should have picked up different Neanderthal genes. That’s exactly what John Hawks found. In his own analysis of the Neanderthal sequences, he saw that Europeans and Chinese people seem to carry different Neanderthal genes.

This is a fantastic time to be interested in human origins. We went from humans replacing Neanderthals, to humans mating with them and picking up their genes. We learned that this happened with the Denisovans before humans spread throughout the Pacific. We learned that inter-group sex happened in Africa before we even left our birth continent. Every passing month complicates the previous picture.

It’s likely to become more complicated still. Chris Stringer says that Currat and Excoffier’s study is an “important bit of work.” However, he thinks that their simulations are too simple. They assumed that modern humans spread from Africa to Eurasia in a single expanding wave. But Stringer says, “In my new book The Origin of Our Species I suggest that there were several waves of modern dispersal into Europe and no doubt several to the East as well.”

In the first waves, small groups of modern humans would have met large groups of Neanderthals. In later waves, the situation was reversed. The encounters between the two groups would have been very different across many thousands of years. Stringer asks, “The remaining question is whether those earliest modern waves survived to contribute their genes (including Neanderthal ones) to the succeeding waves, or was the slate essentially wiped clean each time?”

Should Psychologists Talk About Their Own Mental Health?

MindShould Psychologists Talk About Their Own Mental Health?