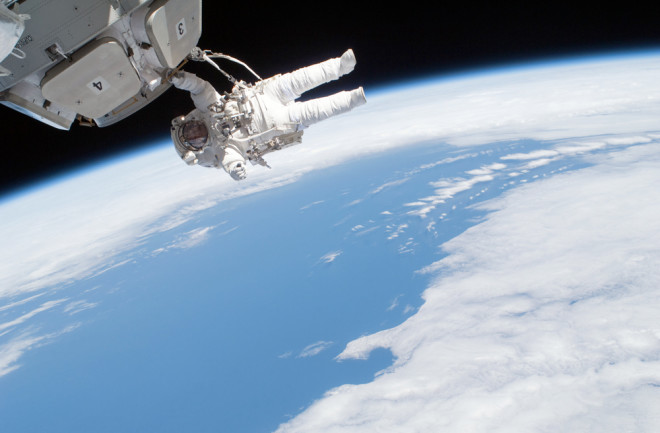 NASA astronaut Nicholas Patrick on an EVA in 2010. Credit: NASA It is 50 years since humans first encountered space – not Sputnik’s first orbit, nor Yuri Gagarin’s first spaceflight, but the first time a crew member stepped out from their spacecraft’s relative protection and immersed themselves in the cold, hostile emptiness of the vacuum. On March 18, 1965, 30-year-old Russian cosmonaut Alexey Leonov completed a 12-minute spacewalk. This feat, and that of Gagarin and Sputnik before, was just one of the many achievements of the Soviet space program in the early years of the space race. Leonov and others who followed him wore specially designed space suits, were tethered and later had helpful gadgets to move them around. Without the tether astronauts would have floated into empty space, with nothing to slow or change direction in frictionless space, with no rescue possible and only an inevitable death as their oxygen supply ran out. If this sounds daunting, imagine being the first ever to have faced this. Only recently have we started to develop robotic equipment versatile and sensitive enough to carry out the complex tasks requiring fine motor skills taken for granted in any lab on Earth. Before then, astronauts had to walk in space and use these tools to repair satellites – such as the Hubble space telescope, which has given us the incredible science and images for the past 25 years. Spacewalks helped ensure we could walk on the moon, take samples and set up experiments. Building the knowledge required to walk in space, and the robotic equipment to later help astronauts, also led toward the establishing of the US Skylab and Russian Mir orbital space labs, and their successor in the International Space Station (ISS).

Spacewalks, known as extravehicular activity or EVA, today last about six hours, more than 25 times longer than Leonov’s first attempt. As in all spheres, spacecraft technology has advanced significantly in the last 50 years. The technology in NASA’s Apollo mission to the moon is often compared to pocket calculators of today. You can run an emulation of the Apollo guidance program on your computer or mobile phone. But the basics of astronaut flightsuits, largely the result of the work of the Soviet space program, are little changed today. Such suits can be daunting even on Earth: the helmet encloses the head and face and can cause feelings of claustrophobia. So imagine the calmness of mind required to cope when something goes wrong, beyond the help of fellow cosmonauts – exactly what happened to Leonov.

A television picture of Alexei Leonov performing the first ever spacewalk. As he ventured from the Voskhod 2 space capsule, Leonov’s suit expanded as the pressure around him changed. Having spent 10 minutes in space, his suit was blowing up like a balloon. If he didn’t act, the suit would start coming apart, and in any case it was too wide to fit through the airlock. He vented precious air from the suit into space. As the effects of decompression sickness and the heat from exertion began to take their toll, he pulled himself back onboard the craft. Have we overcome such problems today? Certainly, many of these are now obvious issues that are understood and controlled. But are EVAs trivial acts of exploration and maintenance? Not by any means. Just last month, a water leak inside astronaut Terry Virts's spacesuit caused problems during spacewalks around the ISS. It brought back memories of a similar incident in 2013 when a buildup of 1.5 liters of water in an astronaut's helmet almost led to his death.

Stephen Robinson on an EVA in 2005. Credit: NASA

Such problems won’t stop missions to explore space and other planets, nor should they. Humanity has overcome many hurdles to enter space, land on the moon and create a space station. The new technologies and materials created for the space programs have filtered into our lives in many other guises – from flame retardants and heat resistant materials, to ultrasound medical devices, water and air filtration, memory foam mattresses, freeze-dried food and prosthetic limbs. It has also been a common cause for nations to work towards together. The space programs and scientists of different nations now regularly work together to explore comets and visit other planets. The past 12 months have been especially packed with solar system exploration. But we mark this day because a human walked in space. While probes and landers can achieve feats no human could, ultimately it is human hands that are needed to carry out experiments and explore. Not because we are better than robots but because we can deal with the unexpected, interpret the incomputable, and bring an emotional side to science. And, as every astronaut confirms, we bring back a view from space that changes us and our society. Thank you, Alexey Leonov.