Hubble Telescope, back on the air!

The Hubble Space Telescope is up and kickin' once again, and just to prove it, check this puppy out: 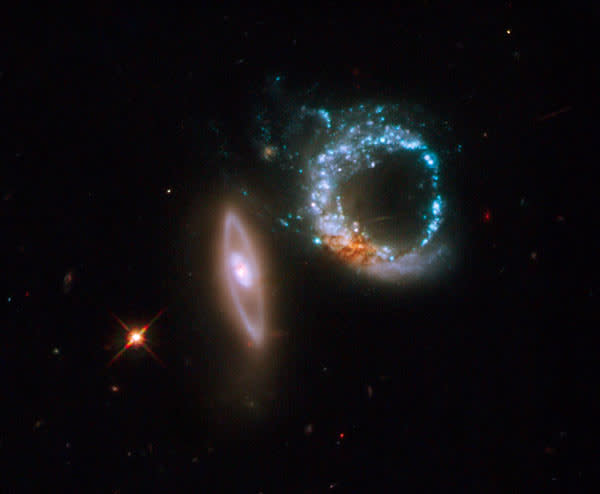 AWESOME! That's Arp 147, a pair of interacting galaxies. Halton Arp, an astronomer, made an extensive catalog of funny-looking galaxies, most of which are due to near or direct collisions between galaxies. It looks like the one on the left glided right through the one on the right. Ring shapes are common after such encounters, though I must admit I'm a little baffled by the smooth ring with the off-kilter core of the left-hand galaxy. The odd angle of the galaxy to us -- it's almost edge-on -- may be contributing to this particularly peculiar view. The bigger galaxy is blue because the collision triggered huge amounts of star formation. That means massive stars get born, and they're blue. They are also much, much brighter than other stars being born, so they dominate the light we see, making the whole galaxy look blue. Interesting that the smaller galaxy is not really blue as well, indicating that it had a milder star-formation burst if any. I don't know why. I may have to dig through the literature when I have time. This is a pretty interesting pair of galaxies! The Hubble folks are billing this picture as a "Perfect 10", because the galaxies kinda sorta look like a "10". A little. Maybe. But the good news is that this is from the Wide Field/Planetary Camera 2, which was shut down until a few days ago. It went offline when engineers were trying to restore Hubble back to speed after a major piece of hardware failed. They were able to get a backup piece working, but other problems delayed the operation. Now, however, things are looking good, and it looks like we have a working telescope. Sometime early next year NASA will launch a Space Shuttle mission to perform a final manned upgrade to the observatory, installing two new cameras and a bunch of hardware that will extend its life another few years. Let me add that this has been pretty amazing. Hubble is an extremely complicated piece of machinery, and it can be really fickle. The fact that it works at all is a testament to human accomplishment, and that it runs so well even after the number and scale of problems it's had is really an incredible achievement for the engineers and scientists who have worked on it. My sincere and hearty congratulations go to NASA. Well done! And let me add that the image above was taken just two days ago, so my astonishment and amazement are directed at the HST imaging team, who must have drained all the coffee in Baltimore to get this done so quickly.

Edited to add: I just heard from my friend Lisa Frattare at Hubble: she worked on the image, along with Zolt Levay and Max Mutchler. I was right; they put in major hours to get this image cleaned up, prettified, and published. Nice work everyone!