Hubble Spies a Galaxy Deformed and Rejuvenated by a Near Collision

The near-miss transformed half a galaxy into a brightly burning nursery of newly formed stars. 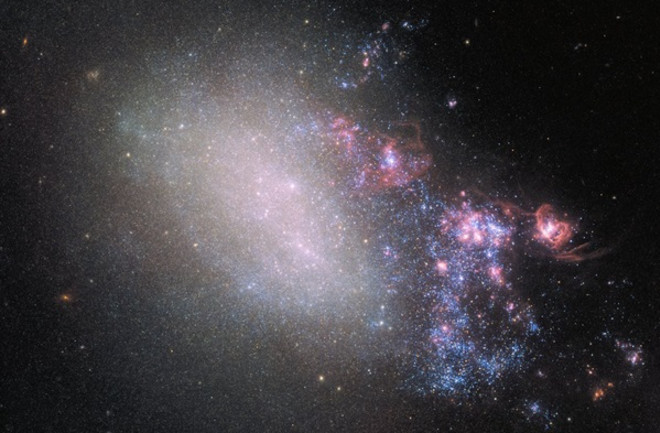 Millions of years ago, the once-spiral galaxy NGC 4485 (seen here) had a close encounter with a much larger galaxy named NGC 4490 (out of frame to bottom right). The near-miss transformed half of NGC 4485 into a brightly burning nursery of newly formed stars and created a 25,000-light-year long stream of knotted gas and dust (right) between the two galaxies. (Credit: ESA/NASA/Hubble)

A cosmic hit-and-run some 30 million light-years away has left one galaxy with an identity crisis. For billions of years, the now-irregular NGC 4485 lived a nice and normal life as a standard spiral galaxy located in the constellation Canes Venatici (the Hunting Dogs).

Then, a few million years back, NGC 4485 experienced a near-miss when the equivalent of a galactic semi-truck (NGC 4490) careened past it, creating a gravitational wake that wreaked havoc for both parties.

The result? Based on a new image captured by the Hubble Space Telescope's Wide Field Camera 3 and Advanced Camera for Surveys, one side of NGC 4485 still looks much like it did before the close encounter. But the other side … not so much.

As you can see in the above image, the left side of NGC 4485 still has hints of its original spiral structure. But NGC 4485's right side — which was closer to the larger galaxy NGC 4490 during the cosmic drive by — has taken on a new form altogether.

Thanks to the gravitational tug-of-war between the two galaxies, massive amounts of interstellar gas were shoved around and compressed. This ignited a flurry of star (and presumably planet) formation in both galaxies. The evidence of this is clear when you simply look at NGC 4885. On NGC 4485's right side, we see many areas bursting with hot, young, blue stars that formed out of the newly mixed gas.

This region is also speckled with bright pink nebulae that are incubating even more newborn stars. Additionally, the interaction created a 25,000-light-year stream of knotted gas and dust that links the two galaxies together. Though the chaotic firestorm captured in this image may seem like terrible news for the stars and planets that already existed in NGC 4485, a galactic collision doesn't necessarily spell disaster for the galaxies involved. Instead, cosmic fender-benders like this commonly result in a period of galactic renewal and rebirth.

With each of these newly formed blue stars comes an opportunity to enrich the galaxy. This is because blue stars are particularly massive (between about 10 and 150 times the mass of the Sun), which causes them to ferociously burn through their fuel. And because they're so big, when they finally run out of fuel, they die in a spectacular fashion — by exploding as supernovae.

These supernovas blast heavy elements trapped deep within the stars far out into space, providing fresh material for the next generation of stars. But what about possible collisions between existing stars and planets?

Fortunately, that's not much of a problem during galactic collisions. Even when two galaxies completely intermingle their stars (which is not the case here), the extreme vastness of space means the odds of any two stars smashing directly into each other are basically nil. So, to quote Douglas Adams, "Don't Panic." Even when the Milky Way collides with Andromeda in some 4 billion years, the solar system will almost certainly make its way through unscathed. That is, at least until the Sun balloons into a red giant about half a billion years later, gobbling up the Earth in the process.