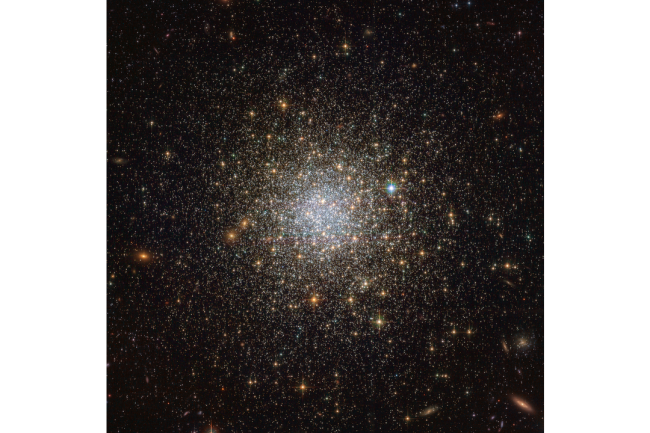 A new look at the Large Magellanic Cloud is helping astronomers better understand how groups of stars evolve. (Credit: ESA/NASA)

NASA’s Hubble Space Telescope has taken new observations of the Large Magellanic Cloud, a small, neighboring galaxy to our Milky Way and found new insights into the star clusters that live there.

Star clusters are quite common in the universe. If a galaxy is a cosmic metropolis, star clusters would be like a small town. They form as huge clouds of gas and dust collapse, birthing a group of stars all with relatively close ages. Once the debris of the molecular cloud have dispersed, the stars are kept close together by their gravity. This shared origin story means that astronomers usually study and identify star clusters based on their age.

But this method doesn’t always work. Sometimes when astronomers compare star clusters of similar ages, they find that they look very different.

And now researchers have found a new way to study star clusters. Astronomers studying the Large Magellanic Cloud were able to rank five of the satellite galaxy’s clusters based on something called dynamic age. It’s a measure of the amount of structural and internal changes that have happened to the cluster over time.

The LMC is about 160,000 light-years away from Earth. This satellite galaxy of the Milky Way is home to a number of stars, ranging in different ages, making it perfect for astronomers to study the lives of stars.

According to Italian astronomer Francesco R. Ferraro, when a group of researchers look at five different star clusters from the LMC, they saw that even with the same age, the star clusters all looked quite different.

And now they think they understand why. According to their findings from studying the Large Magellanic Cloud, in star clusters, heavy suns usually sink toward the center of a group of stars. However, stars with a lighter mass are typically found on the outside of the cluster, and they can actually escape it. That explains why the shape of these clusters can look so different, even at the same age.

The SciencesTo Understand the Universe, Scientists Are Studying the Milky Way’s Cosmic Neighbors
Recommendations From Our Store