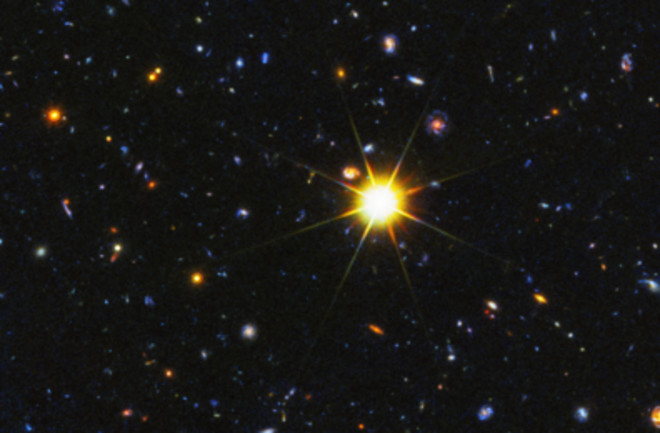 Credit: NASA, ESA, P. Oesch (University of Geneva), and M. Montes (University of New South Wales) NASA’s Hubble Space Telescope doesn’t need a time machine to peer into the distant past. Thanks to its ability to detect ultraviolet (UV) light, Hubble was able to assemble this panoramic image of our ancient, star-bursting universe. Spanning vast periods of time and space, the composite photo features about 15,000 galaxies, 12,000 of which are actively birthing hot, young stars. The UV light reveals stars that were forming in the energetic years following the Big Bang, allowing astronomers to track 11 billion years of stellar evolution. Picking up light from galaxies not only paints an intricate picture of our universe, but it also gives us a first-hand look at our celestial past. The amount of time it takes for a galaxy’s light to reach us depends on how far away it is. The light from the Andromeda galaxy, for example, takes 2.5 million years to reach us since it's 2.5 million light-years from Earth. This means that we’re always seeing our galactic neighbor as it was 2.5 million years ago. For more distant galaxies, though, it can take billions of years for their light to reach us. When it finally does, we’re seeing historic galaxies as they appeared billions of years ago. With nearby galaxies, we're able to pick up a wide range of light — for example, visible, infrared, and UV light — giving us a good idea of their formation, evolution and stellar population. But the farther away the galaxy, the harder they are to see at multiple wavelengths. Galaxies emit a high percentage of UV light as they’re forming new stars. But because of redshift — where the expansion of the universe causes light from distant objects to stretch and appear redder on the light spectrum — UV light from extremely distant galaxies has been stretched into the infrared part of the spectrum. And only the infrared light from the brightest of those distant galaxies is easy to detect. To better understand the dim, distant galaxies we cannot see, astronomers instead aim to study their analogs: small, dim, nearby galaxies. But these, too, are hard to see — particularly from the ground, because Earth’s atmosphere blocks UV light. Thankfully, the Hubble Deep UV (HDUV) Legacy Survey uses the space telescope’s ability to easily glimpse UV light from above the atmosphere. The initiative, which began in 2014, scours the sky for nearby UV-emitting galaxies that are actively birthing stars. By identifying these galaxies, astronomers can study how their earlier counterparts evolved from the young, star-forming regions that existed shortly after the Big Bang, to the mature galaxies we see today.