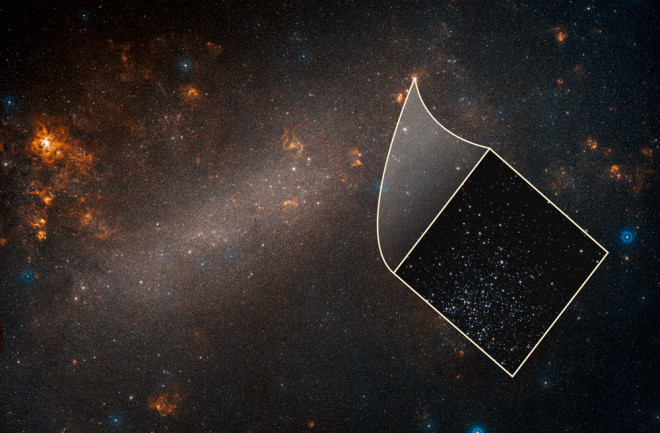 The Hubble Space Telescope revealed the distances to variable stars in the nearby Large Magellanic Cloud. (Credit: NASA, ESA, A. Riess (STScI/JHU), and Palomar Digitized Sky Survey) For a while now, astronomers have been confronting a conundrum. Studies of the early universe, looking at the era just after the Big Bang, tell us that the cosmos should be expanding at one speed. But when astronomers actually measure today's universe, they find a faster rate of expansion. Scientists have known that the universe is expanding for around a century. Astronomers like Edwin Hubble first noticed that every distant galaxy they could measure seemed to be moving away from Earth – and the farther they were, the faster they receded. In more recent years, astronomers have measured the expansion rate of today's universe using the Hubble Space Telescope. And mysteriously, the number it found for our current expansion was some 9 percent off from the expansion rate of the early universe, as measured by the European Space Agency's Planck spacecraft. At the time, astronomers said the odds were something like 1 in 3,000 that the disagreements were a fluke. But in a study released Wednesday, scientists say they've refined the Hubble measurements, doubling down on the idea that today's universe is expanding faster than it was in the past, and dropping the odds of a mistake to 1 in 100,000. At this point, something is definitely fishy, and astronomers need to understand why.

The Hubble Constant is a measure of how fast a galaxy is moving compared to how far away it is. And measuring the speed of a star or galaxy is surprisingly straightforward. The light from any cosmic object moving away from Earth is shifted toward lower frequency, redder colors, just like how an ambulance siren gives off a lower pitch as it's driving away from you. The bigger the shift, the faster the object is moving. But actually measuring the distance to a star or galaxy can be quite tricky. The scientists using Hubble to measure cosmic expansion are following a tradition set down by the pioneers of this field. Astronomers look at Cepheid variables – stars that change their brightnesses on rhythmic, predictable timescales – to measure distances. It's a discovery we can thank Harvard astronomer Henrietta Swan Leavitt for; she first discovered that the intrinsic brightness of one of these stars is directly connected to how long it takes to cycle from dim to bright. Since more distant stars appear dimmer, that means astronomers can use the timing of the star’s cycle and how bright it appears to measure the star’s distance. Edwin Hubble himself used this information to make one of the first measurements of his constant. And today, astronomers like Nobel laureate Adam Riess are using the Hubble telescope to do just the same – but with far greater precision. Riess is the lead researcher on the newly released paper, which has been accepted for publication in the Astrophysical Journal. He led a team called SH0ES (Supernovae H0 for the Equation of State), to pin down the Hubble constant to unprecedented precision. Cepheids are just the first rung on the so-called cosmic distance ladder. Measuring accurate distances to Cepheids yields distances to the closest galaxies where they reside. Measuring the brightness of special Type Ia supernovae in those galaxies reveals the distances to farther galaxies where the same type of supernovae shine. And so on, building the ladder into a ruler to measure the cosmos. But any uncertainty in the first rung of that ladder propagates into every other step.

The cosmic distance ladder combines variable stars and supernovae to measure accurate distances in the universe. (Credit: NASA, ESA, and A. Feild (STScI))

So Riess and his SH0ES team used Hubble Space Telescope observations, combined with ground-based observations, to reduce the uncertainty in the distance to Cepheid variables in the nearby Large Magellanic Cloud from 2.5 percent to 1.3 percent. They found that the earlier measurements of the Hubble Constant in the nearby universe were spot-on. This came as a surprised to Riess and his team because it confirmed earlier disagreements with the Planck telescope. That spacecraft measures fundamentals about the early universe, mapping the cosmic microwave background and calculating the ratio of dark energy, dark matter, and normal matter.

Read more: Why We Still Don't Know How Fast The Universe is Expanding

And Riess’ measurements don’t stand alone, but in line with a host of other measurements from today's universe. Similarly, Planck’s numbers are backed up by other measurements of the early universe in the first few hundred thousand years after the Big Bang. Neither seem likely to change at this point. “This is not just two experiments disagreeing,” Riess explained in a press release

. “We are measuring something fundamentally different. One is a measurement of how fast the universe is expanding today, as we see it. The other is a prediction based on the physics of the early universe and on measurements of how fast it ought to be expanding. If these values don't agree, there becomes a very strong likelihood that we're missing something in the cosmological model that connects the two eras.”

It’s not clear what the solution is to make the two numbers agree. And indeed, at this point, it’s not clear they will ever agree. Instead, it’s looking more like a true sign that our early universe behaved differently than it does today with regard to expansion. So what might cause these changes? Dark energy, while still deeply misunderstood, is best described as the energy that causes expansion, from the Big Bang’s first outward rush to the movement we still see today. While dark energy is part of the standard cosmological model, it could be that it worked in surprising ways, increasing the universe's expansion at some point after the Big Bang. Or Riess suggests the key might lay in “dark radiation” like neutrinos, particles that travel at nearly the speed of light but barely interact with normal matter. Whatever the resolution, Riess says we'll likely need to accept that these two numbers are genuinely different. Now, astronomers must focus on seeking a resolution by coming up with better models of our universe.