Hubble and Gaia Measure the Weight of Our Milky Way Galaxy 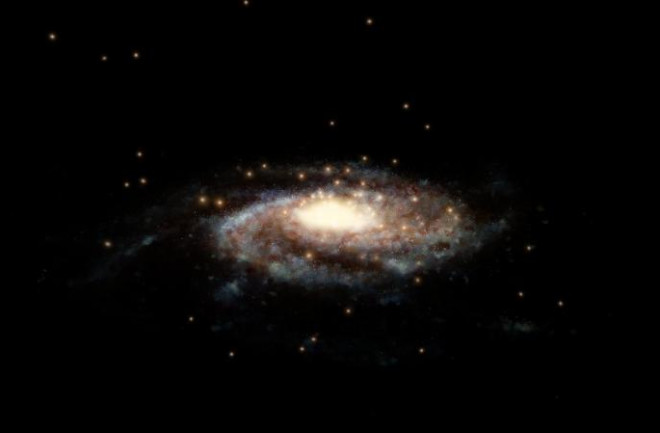 The Milky Way is surrounded by globular clusters, dense groups of stars that appear as yellow dots in this illustration. (Credit: ESA/Hubble, NASA, L. Calçada) Measuring the total mass of our home galaxy is a tough puzzle. It’s difficult to see it all at once, buried as we are within one of its spiral arms. And there’s a huge portion of the Milky Way we can never see, since it’s made up of dark matter, which doesn’t emit light at all. So to get an accurate number, researchers need to weigh both the visible and invisible material that makes up the galaxy. Now scientists have done just that, using new data from the Hubble Space Telescope combined with the Gaia spacecraft. This latest mass measurement of the Milky Way weighs in at 1.5 trillion times heavier than our sun.

Gravity dictates that the more massive an object is, the faster its satellites will orbit around it. So the new data from the two spacecraft looked at our galaxy’s brightest satellites: globular clusters. These are dense groups of stars that orbit in the halo, or outer portion of a galaxy. Most large galaxies have such hangers-on, and the Milky Way is no exception. Many spacecraft can spot these globular clusters, and they’re even popular targets for backyard astronomers. But to accurately judge their motions in three dimensions takes high precision and careful analysis. Gaia and Hubble are both up to such work. Gaia specializes in the very precise measurements of objects across the Milky Way, and returned measurements of 34 clusters out to 65,000 light-years. Hubble can see farther at higher resolution, but has a smaller field of view than Gaia. It found 12 clusters out to 130,000 light-years. Together, the spacecraft made a comprehensive map that let astronomers estimate the Milky Way’s mass out to 1 million light-years. Earlier findings ranged from only 500 million times our sun’s mass up to 3 trillion times. The new finding of 1.5 trillion solar masses puts the Milky Way among the universe’s larger galaxies. It also has a normal amount of dark matter, given the number of stars that astronomers measure. And understanding the total mass of our galaxy, and how its stars’ mass stack up against its dark matter, can help astronomers answer important cosmological questions about how galaxies like ours evolve.