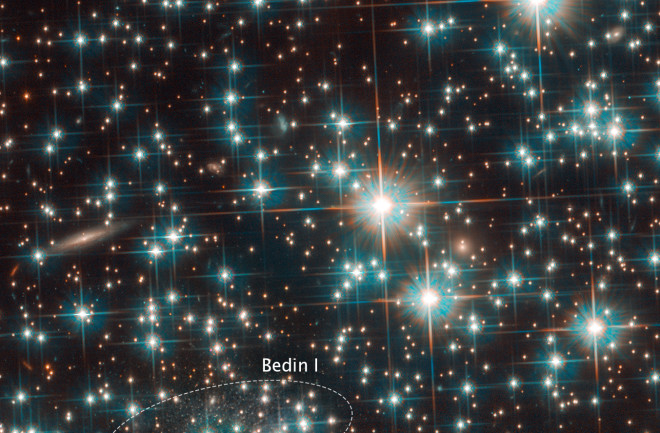 The Hubble Space Telescope has discovered a small and strangely isolated dwarf galaxy just 30 million light-years away from our own Milky Way. And astronomers say the discovery was completely by accident.

Luigi Bedin, of the Astronomical Observatory of Padua, and his colleagues were using Hubble to study a globular star cluster called NGC 6752. Globular clusters are tightly packed crowds of ancient stars. And when they looked at the images Hubble sent back, they noticed a small galaxy hiding behind the cluster’s brighter stars.

Dwarf Galaxy is a Hermit

The galaxy, dubbed Bedin 1 by its discoverer, is distinct in its isolation. There’s a chance this small swirl of stars may be connected to a larger nearby galaxy, but the two are far apart and it’s not clear they have ever interacted. And that’s what makes Bedin 1 so interesting for astronomers. First, most dwarf galaxies are found huddled up closer to a larger galaxy. Second, Bedin 1 shows little sign of past interactions with any galactic neighbors.

Dwarf galaxies are common in the universe, but most ride the coattails of larger galaxies. Because regular galaxies like the Milky Way are hundreds or even thousands of times larger, these dwarf galaxies are at the gravitational mercy of their larger brethren. Astronomers have often noted evidence of smaller galaxies being pulled apart or consumed by larger ones. And all this activity can often mean complex histories of star formation, as old stars get ripped away and gas – the fuel of starbirth – gets pushed around, sparking new generations of stars.

When galaxies make stars, they tend to do so in batches that include all types at once: giant stars that burn hot and die quickly, and small stars that live longer than the universe’s lifespan so far. Nearly all the stars astronomers measured in Bedin 1 are small and old, implying the dwarf galaxy made all its stars in a single burst of activity some 10 billion years ago. Bedin 1 has sat quietly ever since, letting its massive stars burn out and die and making no new stars to replace them, unperturbed by the cosmic shuffle around it.

So if Bedin 1 is gravitationally connected to the distant NGC 6744, the larger galaxy appears to have left its little sibling alone.

The astronomers also note that a survey planned for the upcoming Wide Field Infrared Survey Telescope (WFIRST, planned to launch in the mid-2020’s) may find more of these small, hermit-like galaxies.

The team published their discovery Jan. 31, in the Monthly Notices of the Royal Astronomical Society: Letters.