How to Tell a Rock from a Penguin: It’s Harder Than It Sounds 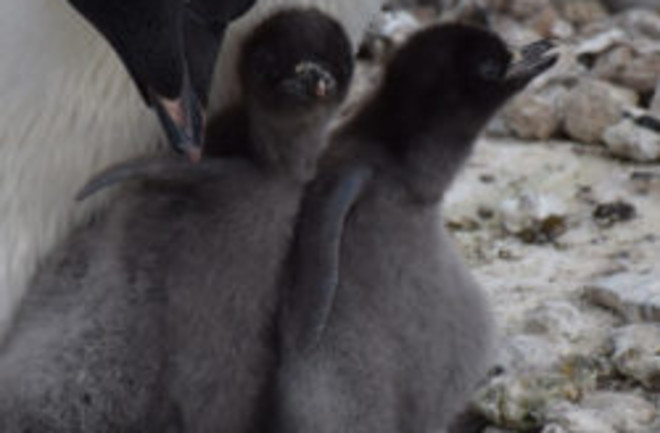 Adelie penguins. Credit: Jean Pennycook By: Lishka Arata Many things distinguish penguins from rocks. There’s color difference (usually), behavior (penguins waddle, rocks don’t), social structure (rocks don’t have one) -- the list goes on. But why might someone need to distinguish between rocks and penguins? It’s a skill central to a long-term project that relies on citizen scientists, working from the comfort of their homes, to identify penguins in photographs taken by remotely operated cameras in Antarctica. The project, focused on Adelie penguins, aims to determine how climate change affects living systems. Changes in climate affect temperature in different ways ,which affects how much sea and land ice we see each year on and around Antarctica. Adelie penguins respond strongly to this because they need unfrozen ocean to forage in and bare, rocky ground to set up and build their pebbly nests. For the past 11 years, scientist and educator Jean Pennycook has invited members of the k-12 community to join her in the project, funded by the National Science Foundation, about Adelie penguins at the Cape Royds Adelie penguin colony in Antarctica. And for the past three of those eleven years, she’s led a citizen science project that’s engaged about 10 groups of young students each year from around the world to help her and her fellow scientists track five clusters of breeding penguins at Cape Royds. Participants view photographs of the study site, count the number of adult versus newly hatched penguins throughout the course of the season, and make observations about what they see over time. This helps the scientists ground truth their estimates and, depending on when participants start counting, can help fill in missing information. This is also where the ability to distinguish between a rock and a penguin becomes helpful! Adelie Penguins spend a large portion of their year at sea, “flying” through ocean waters with their flipper-like wings and catching fish to eat with their thick, spear-like beaks. For a few months of the year, from October through February, they come to land in Antarctica to pair up, build nests, and raise more penguins. Every year, Jean and project leads David Ainley of HT Harvey and Associates, Grant Ballard of Point Blue Conservation Science, and Katie Dugger of Oregon State University, as well as other seasonal biologists, head to Antarctica to study the penguins in this colony. But the tricky thing about field work in Antarctica is that for part of the year, the low light and low temperatures make it difficult to travel there. For this reason, Jean and her fellow scientists don’t arrive at Cape Royds until November, about a month into the Adelie Penguin breeding season. They leave in early January, a month or so before the end of the season, meaning they can’t collect data for nearly half the breeding season.

Sample photo taken from automated camera in Antartica. Credit: Jean Pennycook This is where you come in. Citizen scientists like you, and like the students Jean has worked with over the years, can add missing data by observing daily photos taken by automated cameras throughout the entire season, start to finish, and sharing information from those photos with the project. Not only will you be helping add to scientific data sets to track change over time, there are endless learning opportunities in getting involved with this project as well. One that Jean has seen as very valuable to classrooms is student exposure to and experience doing a long-term study. She emphasized the unique opportunity for teachers and classrooms to take ownership of a long-term project over the course of the season, or even over the course of multiple years. “To see change over time is very powerful and gives students insight into how nature works and how we all affect and depend on each other,” says Jean. This year, for example, Jean and the classes currently engaged with the project have seen lower numbers of breeding penguins. This is likely because there is more sea ice this year than she’s seen in the past several years, which makes it a lot harder for the Adelie Penguins to get to the open ocean where they find their seafood meals. One memorable and touching moment Jean recalled from over the years was a Girl Scout troop that was so inspired by the penguin project that they worked with Jean to create a whole new penguin patch for scouts to earn. Adelie Penguins serve as an important tool to help us track the far-reaching effects of climate change. You can use this citizen science project to learn about these fascinating animals and their remote home at the same time that you are helping to unravel the effects of climate change over time. Visit http://penguinscience.com/education/count_the_penguins.php to get started. If we all work together to sort the rocks from the penguins, we can help use that information to take care of the places we all depend on. Lishka Arata is a conservation educator at Point Blue.