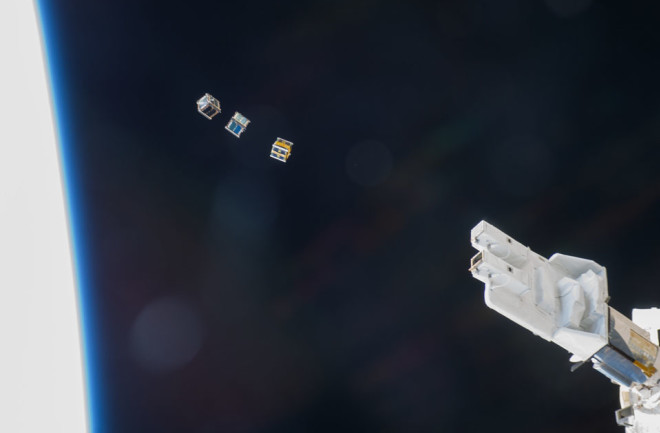 NASA releases three CubeSats into orbit in January 2014. (Credit: Expedition 38 Crew, NASA) Ice is a pretty all-around useful chemical, but generally for mundane things: chilling drinks, skating on, mending swollen joints. But some scientists have a far sexier purpose in mind for ice — as rocket fuel. CubeSats, introduced in the early 2000s, are music-box-sized satellites that are democratizing space research because they are tiny, inexpensive and can perform myriad tasks. For all their versatility, CubeSats have a glaring flaw: Engineers are hard-pressed to fit a propulsion system into CubeSats’ already compact designs. But a team from the Netherlands believes it has solved the problem by building an ice-propelled rocket.

At the Delft University of Technology in the Netherlands, Angelo Cervone and his team have designed a CubeSat that relies on just 100 grams of frozen water to travel through the vacuum of space. Currently, the lack of a propulsion system has limited the functionality of CubeSats, because without one, scientists can’t change a CubeSat’s orbit or, for example, control the position of an onboard camera. As a result, CubeSats can only hover a few hundred miles from Earth’s surface, and often crash and burn within several months. The ice-propulsion system is a lightweight and relatively simple solution to CubeSat mobility. In the low-pressure environment of space, frozen water sublimates, meaning it skips the water stage and transitions directly from a solid to a gas. Cervone’s propulsion system contains a heat plate that warms the water vapor molecules before they escape, which creates a propulsion force, the New Scientist reported. The researchers published their proposed method in the journal Acta Astronautica. Escaping water vapor may not seem like much of a push, but in the vacuum of space, you don’t need much. The big problem for Cervone’s propulsion system is keeping four tablespoons of water frozen while the payload waits for launch. Re-freezing the water in space is an option, but it would require more equipment in an already tiny space.

NASA has deployed dozens of CubeSats, and universities and private companies around the world are collecting troves of data from their tiny cubes floating in space. With so many organizations with skin in the game, there’s a race to discover a viable CubeSat propulsion system. Ice propulsion isn’t the only method being explored by scientists — it’s not even the only method being explored by Cervone’s team. Cervone’s team also designed propulsion modules that utilize cold gases like nitrogen, propane and butane. Accion Systems, a space tech company, has developed penny-sized thruster chips that utilize ionic propulsion to control a CubeSat’s position. Ionic propulsion converts electrical energy into kinetic energy by electromagnetically accelerating charged particles to move a spacecraft. Scientists and engineers are also experimenting with plasma propulsion systems. According to New Scientist, Cervone believes his team could launch a prototype of an ice-propelled CubeSat within a few years.