How to Achieve Near-Immortality: Wear the Right Clothes

A cobbled-together, $10,000 suit can protect you from radiation, chemicals, bullets, and pretty much any other insult of modern life—including socializing. 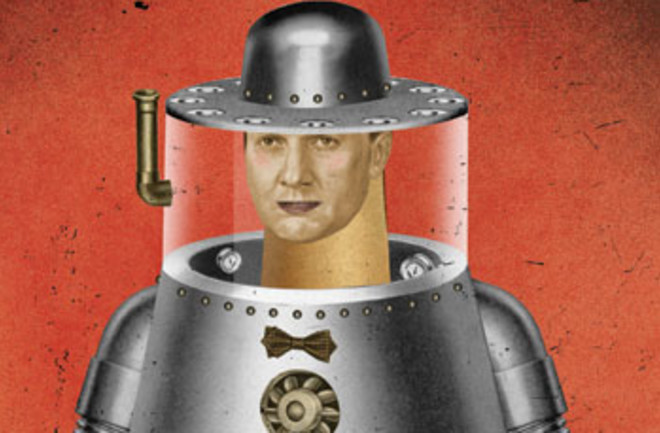 One chilly fall day in 2001 my brother and I were chain- sawing fallen trees for firewood when the saw kicked on a knot and shot out of my brother’s hands and into his groin. It took me 10 minutes to pry his hands off the area of injury so I could assess the damage, which turned out to be just an ugly gash in his jeans. Another time I watched a friend bounce off a mogul and impale himself in the upper thigh with the wrong end of his ski pole. And I’m not just an observer of mayhem; I’m a victim, too. I’ve survived a motorcycle accident, dog and snake bites, and the nuclear accident at Three Mile Island; I’ve also had a gun pulled on me in anger, escaped two flash fires, and been knocked unconscious by fire-extinguishing gas while sitting in a fake space capsule. (I’m not making any of this up; my editors wouldn’t let me.)

All of which leads me to conclude there is a market for clothes that are crash-bullet-blast-toxin-radiation-proof and that also monitor both the wearer and his environment for threats. A market not for police and rescue workers and other hero types, but for ordinary disaster magnets like me. And no need for them to be particularly stylish—you can’t take coolness with you, or take much advantage of it if you have been de-crotched.

To assemble such a nurturing ensemble, I’ll start with Kevlar, the tough synthetic fiber used in clothing already available to protect against motorcycle falls, chain saw accidents, bullets, blasts, and even snakebites. A bunch of problems solved at once? Not necessarily. Ronald Egres, the scientist who develops high-tech fibers for protective clothing at DuPont, Kevlar’s maker, notes that different types of threats call for different types of Kevlar. Slowing a bullet, for instance, requires a loosely woven version of the material with soccer-net-like elasticity, while holding together against the sharp tip of a knife requires a tightly woven fabric.

Fortunately I may not have to settle for this potentially deadly trade-off. Egres’s team is finding ways to overlap different weaves of Kevlar, some of them reinforced with plastic resins, for protection against multiple hazards. “It’s a division of labor among the layers,” he says, noting that DuPont has already used such smart layering to reduce the thickness of a bulletproof vest from 36 layers to 11, and its weight from 5 pounds to 4.

It is conceivable, then, that in the near future I will be well shielded from my favorite life-threatening weapons, but what if during my adventures I am engulfed by flames or toxic waste? I could bolster my Kevlar duds with a few layers of plastic sheeting to seal out liquids and vapors and add an outer coating of reflective aluminum to fend off the intense but short-lived radiant heat of a flash fire. Then again, I could also suffocate to death.

Philip Mann, the technology chief at Kappler, a Guntersville, Alabama, company that manufactures such multilayer suits for emergency responders, notes that while such a suit would do a great job of sealing out nasty liquid, gas, and heat, it would also do a great job of sealing in all the nasty liquid, gas, and heat that my body produces. “If your sweat can’t evaporate, you can’t cool yourself,” he says. “You might not last long.” Fortunately Kappler has an answer in development: a breathable material with micropores small enough to keep out dangerous molecules, but just large enough to let out water molecules, so that I can stay comfortable for hours while I’m wading through pools of glowing green goo. Even if I don’t ever don that suit, it could make life a lot more pleasant for emergency workers and cleanup crews.

That still leaves the problem of how to guard against toxic fumes. I’m too practical to want to walk around in a full breathing apparatus all day long, appealing as that sounds. RAE Systems in San Jose, California, presents a possible solution in the form of a portable gas detector small enough to mount on a belt buckle no larger than the one I wore through most of the 1970s. The company claims the device can identify more than 300 volatile organic compounds (VOCs), those foul chemical vapors that waft off solvents, new carpet and furniture, and just about anything else that comes out of a factory, plus 25 different toxic gases.

The device’s sweeping sensitivity comes from a tiny sensor that uses UV light to knock electrons out of most gas molecules, creating a measurable electric current. Meanwhile a heated platinum bead in the detector ignites whatever flammable gases it encounters and then measures the resulting heat. “We can detect VOCs down to the parts per billion,” claims RAE marketing manager Michael Weinstein.

Whether my buckle is beeping or not, my über-suit thus far offers no protection against the tiniest assassins of all: High-energy radioactivity such as beta particles and gamma rays can zip through most clothing to wreak havoc on cellular DNA. But not through Demron, a material invented by physician Ronald DeMeo (DEMeo, RONald—get it?).

Convinced that there had to be a better way of protecting people in hospitals from X-rays and other radiation-based treatments and tests than draping them in 10-pound lead aprons, DeMeo spent the 1990s experimenting with ways to impregnate plastic fabrics with different metals until he found a combination that blocked radiation about as well as lead and yet could still be fashioned into more-or-less normal-looking clothing.

DeMeo’s results were so successful that his nine-pound suits—which look a bit like Halloween-costume versions of space suits but are roomy enough to fit over my bulletproof vest and gas protector—have become the outfit of choice for workers helping clean up the post-tsunami Fukushima reactor-meltdown site in Japan.

Women at high risk of breast cancer can buy a Demron bra within the next month or so to block out the background radiation we’re all exposed to, and the bra also allows patients being treated for breast cancer with a radioactive implant to leave the hospital without exposing others. (I was ready to order Demron underwear to protect the most vital of my vitals, but DeMeo explained to me that testicular cells stop actively dividing much earlier in life than breast cells, leaving the former much less likely to become cancerous due to radiation exposure. One less thing to worry about. Well, two.)

What could possibly harm me now? Oh, please. For one thing, a boulder could pin me down in the backcountry, leaving me unable to get through my Kevlar shirt to free myself by gnawing off my arm. Heart attacks, catastrophic shaving accidents, and other mishaps could happen when I’m somewhere no one can hear me whimpering semiconsciously.

My clothes could still come to the rescue, though, by recognizing my distress and relaying my whimpering over a wireless network. That’s why my future undergarments will include the BioHarness, a special chest strap from an Annapolis, Maryland, company called Zephyr that measures vital signs like heart rate and skin temperature, as well as body motions, and relays any worrisome readings via a Bluetooth transmitter to whoever might be standing by with a cellphone or computer to help. The device came in handy last fall when 33 Chilean miners lay trapped half a mile beneath the ground for 69 days, allowing doctors to keep tabs on the miners’ health and to gauge their ability to endure the stress of the rescue effort.

Should I find myself trapped in a mine 10 years from now, I might not need to strap anything to my body, thanks to Nicholas Kotov, a University of Michigan chemical engineer specializing in nanotechnology. Kotov is creating fabrics partially made from conductive carbon nanotubes (picture microscopic ziti made of rolled carbon atoms), which he expects could lead to garments that are essentially themselves electronic devices.

In principle such clothing could not only detect blood, it could also run tests on it. And in theory it could look outward, too, monitoring for gases and other external threats. The biggest obstacle, Kotov says, is that he hasn’t figured out how to make such fibers laundry-proof: They decompose in the washing machine. “The best solution for now is to make them as disposable fabric patches,” he says. “We should be able to make them for less than 50 cents.”

I wish the rest of my getup could be so affordable. A Kevlar bulletproof vest goes for about $700; a Kappler chemical-and-fire-protective suit can push $3,000; a top-of-line RAE gas detector costs more than $6,500; and that Demron suit will set me back at least $1,700. Add them up and a not-fully-protective, really sweaty, socially repellent multisuit will run me about $10,000, and that’s without tailoring. Of course we know that technology is continually bringing us better stuff for less money, so I’m budgeting $80 for the fully invulnerable version that’s just around the corner. Hey, my life and limb are worth it.

Now please excuse me—my gas-detector belt buckle just went off. I’m pretty sure I need to let the dog out.