How Tiny Crystals Can Tell Us the History of a Continent 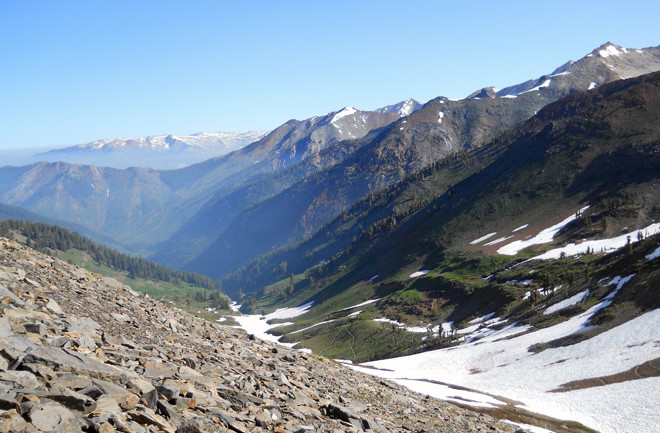 The Mineral King valley, seen from the side of Vandever Mountain. Image: Erik Klemetti In the February issue of the journal Geosphere, you will find a paper authored by yours truly, along with Jade Star Lackey from Pomona College and my former research student Jesslyn Starnes, on our work in the Mineral King area of California. This paper is currently available on the Geosphere website, so I though it would be a great time to discuss what exactly is in the paper. The story it tells is one of giant eruptions that occurred on the western margin of North America during the Jurassic and Cretaceous -- upwards of 200 million years ago. What we found is that by looking at zircon crystals from these ancient volcanic rocks, we can decipher the changing styles of magmatism during the 60 million year span that they cover as North America grew westward. So, how did I get here? I tend to work on very young volcanic rocks, geologically speaking. Some of my most recent projects looked at rocks that were centuries to decades old but here I am looking at rocks that are a million times older! I ended up working at Mineral King for much the same reason I ended up as a geologist in the first place: the Keck Geology Consortium. This group of small liberal arts colleges helps faculty run projects during the summer where 3-10 undergraduate students get down and dirty with field and labwork, culminating in a senior research project. I did one of these as a student at Williams College, working on Vinalhaven Island in Maine, and it is what launched me on my way to where I am now, studying magma and volcanoes. My first research student (Jesse Starnes) here at Denison decided to work on a Keck project run by Jade Star Lackey and Stacy Loewy looking at the igneous and metamorphic rocks of the Kings Canyon/Sequoia National Park area. As her advisor, I thought it would be great if she worked on some old volcanic rocks caught up in the Sierra Nevada batholith (all Late Cretaceous, so much younger) in an area called Mineral King (see top) and use zircon to try to understand what processes formed these rocks. She was interested in the aspect, so off we went. After 4 weeks of field and lab work (which involved getting stuck in a few big thunderstorms in the high Sierras -- quite a character-building experience), we had quite an interesting set of data for these Mineral King rocks. (Jesse has gone on to do some really cool work in her Masters' at UC Davis looking at garnet and zircon from the Franciscan terrane in western California). We knew a little bit about these rocks as Cathy Busby had worked at Mineral King for her dissertation. The volcanic rocks are clearly large volume rhyolite eruptions -- large ash flows like you might get in a caldera eruption. These rocks had preliminary ages that suggested they weren't all the same volcanic package that had been folded and faulted, but by using the SHRIMP-RG at Stanford, we could date a whole bunch of zircon from these rhyolite eruption and really nail down when these magmas formed. We could also look at the composition of the zircon to try to understand the petrologic processes that formed the rhyolite -- that is to say, what events occurred to create the large volume of magma that erupted. This was really the part of the project that would be new and exciting.

An example of one of the Mineral King rhyolites. You can definitely still recognize it as a volcanic rock in the field, but they are definitely altered. Image: Erik Klemetti Why use zircon here? Well, these ancient volcanic rocks have seen a lot of history (see right), so the typical methods to examine the origin of volcanic rocks by looking at the composition of the bulk rock likely wouldn't work because these rocks have experienced metamorphic reactions and alteration from fluids passing through the rock. That is part of the way Mineral King got its name -- there is a lot of alteration of rocks by fluids that are typical for metal-bearing deposits ... just turns out that Mineral King should have really been called Mineral Pauper. Over the course of a few years, Jesse and then I sampled and analyzed zircon from the 4 major rhyolite units at Mineral King and found that there are two periods of volcanism recorded. The first is ~196 million years old (early Jurassic) and the second is ~136-134 million years old (early Cretaceous). These ages are interesting because if you look at all the volcanic and intrusive rocks that have been dated in the Sierran province of western North America (see below), they fall into two "gaps" -- two periods were we don't see a lot of preserved igneous rocks. So, already, interesting result #1!

The ages of the Mineral King rhyolites from this study, put in the context of ages across the Sierra Nevada province. Image: Klemetti et al. (2014) What was really exciting for me was looking at the composition of the zircon from these volcanic rocks -- could we see a difference between the older and younger rhyolite? Sure enough, we could. The zircon from oldest rhyolite have a restricted composition and the lowest δ^18O of the rhyolites we examined. Oxygen isotopes are useful because they keep track of how much continental crust (or other materials) might have been involved in the formation of the magma. In this setting, you can assume that the lower the value, the less continental crust was incorporated into the magma. The younger rhyolites had higher δ^18O, a wider range of compositions (see below) and even picked up some what we call "xenocrystic" zircon; that is zircon incorporated from rocks there were already around before the magma formed. How do we know this? Well, from a rock with dominantly zircon that are ~137 million years old, these xenocrystic grains were over 1.6 billion years old! Zircon that old had to have been eroded from the core (craton) of North America.

Zircon ages versus thorium content of the zircon. The older rhyolite (red) shows a must tighter cluster than the younger rhyolites. The older rhyolite also has lower Th content on average, which is likely a signal that the magma didn't interact with continental crust. Image: Klemetti et al. (2014) How did we interpret these data? This is the fun part, at least for volcanologists and petrologists. Can we make a coherent and supportable story out of the observed data? What I think is these data tell us about how volcanism and magmatism changed over 60 million years. The older rhyolite (~196 million years old), with their lower oxygen isotopic composition and tight cluster of composition, suggest these did not interact with continental crust -- they were rhyolite that formed in a volcanic arc that might have been in oceanic crust, like the modern Kermadec Islands north of New Zealand. A example of a rhyolite eruption from such a setting might be the 2012 Havre eruption. However, 60 million years later (a long time, even by geologic standards -- that is only a few million years less than we are separated from the dinosaurs), the story has changed. The rhyolite erupted then have higher oxygen isotopic values, they have a diverse range of zircon compositions that betrays recycling of zircon crystals and they have inherited xenocrystic zircon from the core of North America. So, by ~135 million years ago, the volcanic arc was in much more evolved continental crust than the early arc, maybe something like the North Island of New Zealand or Japan -- maybe like the Toya caldera. All of these island arcs would eventually collide with North America to help the continent grow westward. So, this story of change in the types of volcanic arcs and the growth of continental crust off North America is all locked in zircon that, like a time capsule, records age and compositional information and protects it from processes that can alter the rest of the rock. What does this mean? Well, for one, it means that you can examine all sorts of ancient volcanic rocks that have zircon in other places and get information about the conditions in which they formed from these tiny crystals. As our ability to get higher and higher resolution ages from zircon increases, we can make more refined statements about geologic events on Earth that has seen much of its evidence erased. To me, it is exciting because what started as an undergraduate research project to check out some knackered volcanic rocks has now ended up with a paper that unravels the history of North America during a time where we just don't have a lot of evidence. This project is still ongoing, as I had a second research student who looked at the conditions of the formation of the granite intrusions that surround this chunk of older rock in the Sierra Nevada. We're hoping to pull all the research that has been done at Mineral King since 2010 into a coherent story that might take us from over 230 million years ago (the oldest volcanic unit we've dated so far -- not in this paper) to less than 90 million years ago. Really, that is why I became a geologist: to figure out if we can read that book that is written in the rocks to understand how this planet became what it is today.