How Passing Asteroids Reveal the Secrets of Distant Stars 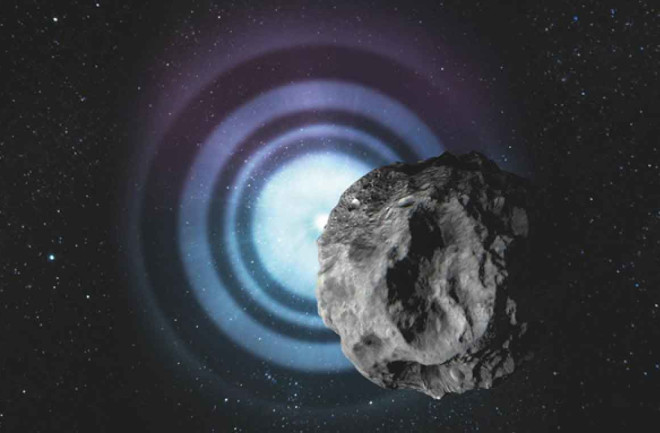 This artist's concept shows the (greatly exaggerated) diffraction pattern of starlight that occurs when an asteroid passes in front of the star. The pattern of light allows astronomers to measure the star's size. (Credit: DESY, Lucid Berlin) Stars in the night sky appear as tiny points of light because they are too far away for your eyes to resolve. But even through powerful telescopes, stars still appear as mere points because they are too small to see their true physical size at vast distances. Now, a group of astronomers from over 20 different institutions has found a way to combine a unique telescope array with passing asteroids to measure the diameter of two distant stars, including the smallest star directly measured to date at just over twice the size of our sun. Their work appeared April 15 in Nature Astronomy. And using this new information, astronomers can better refine their picture of the properties and life cycles of stars, which are the building blocks that make up our galaxy and every other galaxy in the universe.

How to Measure a Star

To measure the size of a star, the team used events called occultations. An occultation occurs when one object — such as an asteroid or planet in our own solar system — passes in front of a star. Occultations can reveal a wealth of information about either the object passing in front of the star, or about the star itself. An occultation in 1977 led astronomers to discover the rings of Uranus, while occultations of Pluto allowed researchers to probe the dwarf planet’s tenuous atmosphere. In this pilot study, the team went after even more difficult-to-see occultations — those caused by asteroids passing in front of background stars. To catch the events, they used the Very Energetic Radiation Imaging Telescope Array System, or VERITAS, which contains four telescopes designed to detect gamma rays. Each 12-meter telescope is made up of 350 individual mirrors, which allow the array to detect the extremely faint, fast flashes of light caused when gamma rays interact with our atmosphere. The array can also spot asteroids in our solar system occulting distant stars; as an asteroid zips in front of a star at about 15 miles (24 kilometers) per second, the dip in starlight is extremely short-lived. But the way the star’s light behaves as it diffracts around the asteroid during that time reveals the star’s size. Occultations occur often, but the shadow cast by the event is tiny compared to the size of Earth. Shadows only fall over a minuscule portion of the planet, so many astronomers who study occultations take to the road (or sea, or sky) with mobile telescopes. VERITAS can’t move, however, so to study occulted stars, the team had to wait for an occultation to occur that would be visible from the Fred Whipple Observatory in Arizona, where the array is located.

The team’s first target was the star TYC 5517-227-1, which is 2,674 light-years away. It was briefly blotted out by the 37-mile-wide (60 km) asteroid Imprinetta on February 22, 2018. “Nobody was sure the occultation would even be visible from our location in the first place,” said co-author Tyler Williamson of the University of Delaware in a press release. “The most recent estimate we had going into the night was that there was about a 50 percent chance that the shadow would be cast over our observatory — the asteroid is small, and there were uncertainties in size and trajectory, making it impossible to say for sure where the shadow would fall.” But the odds were in the team’s favor — VERITAS’ ability to take 300 images each second revealed that Imprinetta did indeed pass in front of the star, allowing the researchers to study the starlight during the event and determine the star is about 11 times the diameter of our Sun. That makes it a red giant star, which has puffed up and cooled off in the later stages of its life. A few months later, on May 22, 2018, the 55-mile-wide (88 km) asteroid Penelope crossed in front of TYC 278-748-1. At a distance of 700 light-years, TYC 278-748-1 is only about 2.17 times the diameter of our sun, classifying it as a G-dwarf star, like our own. This size also makes TYC 278-748-1 the smallest star ever measured directly.

Measuring the diameters of stars directly reveals a treasure trove of information, says study co-author Jamie Holder, also at University of Delaware. “How big and how hot a star is tells you how it was born, how long it will shine, and how it will eventually die,” he says. The size of most stars is not measured directly, but instead estimated based on properties such as temperature and brightness. Some stars have been directly measured through similar methods, such as when the moon passes in front of them or by using a technique called interferometry, which combines the light from two or more telescopes to tease out details. But using VERITAS to watch asteroid occultations, the team says, is 10 times better than lunar occultations and two times better than interferometry, offering a clearer picture of more — and smaller — stars in the future. Now that the technique is proven, the team plans to improve and increase their observations with VERITAS. Ultimately, the technique will assist astronomers in “building data on a whole new population of stars,” Holder says.