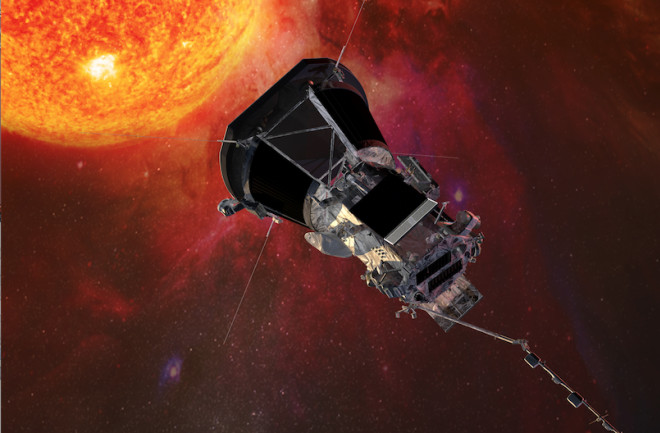 The Parker Solar Probe will scream around the sun at more than 400,000 mph and get as close as 3.83 million miles before burning up. (Credit: Johns Hopkins University Applied Physics Laboratory) In ancient Greek mythology, Icarus’ newly crafted wings made him exceedingly bold and confident. Overcome with ecstasy, he soared too close to the sun, melting his wings until he fell back to Earth. Are humans about to share a similar fate with the first probe to explore the sun, or will our ingenuity spare us? Over decades of spaceflight, we’ve sent probes to Mars, Saturn and even our beloved dwarf planet Pluto – uncovering the mysteries of the planets of our solar system. Meanwhile, the star at the heart of it all has remained unprobed. That’s about to change. NASA’s Parker Solar Probe will launch as soon as Saturday. And, over the course of a seven year mission, Parker will orbit the sun two dozen times, with its final three orbits coming as close as 3.9 million miles from our star’s surface. This is some 4 percent the distance between Earth and the sun. “[Parker] will not only make history by answering questions that have puzzled scientists for decades, but it may also lead to the discovery of new phenomena that are completely unknown to us now,” says Nour Raouafi, Parker Solar Probe Deputy Project Scientist. “This mission has the potential to steer solar and heliospheric research into a new direction.” Using Parker, scientists hope to unravel some of the outstanding mysteries surrounding the star of our solar system. Chief among those is why its outer atmosphere, called the corona, can reach scalding hot temperatures of some 2 million degrees Fahrenheit, while 1,000 miles below, the surface of the sun is relatively “cool” at 10,000 degrees F. Are these temperatures making you worry for Parker’s well-being? Don’t sweat it. “The spacecraft and most of the payload will be protected by a shield from the sun’s heat, which will be as high as 500 times what we experience at Earth,” Raouafi says. The heatshield, made of carbon composites, must be positioned between the spacecraft and the sun’s corona at all times during close encounters. If the shield is misaligned even briefly, the probe will melt in a matter of seconds. But why won’t carbon melt under such extreme temperatures? The reason boils down to a fundamental difference between heat and temperature. Temperature describes the kinetic energy of molecules, so higher temperatures mean molecules move faster. But heat is the transfer of energy between molecules. Just outside the sun’s atmosphere lies the emptiness of space. Here there are few molecules to collide with Parker’s sun shield and transfer heat to the device. NASA predicts the shield will only reach temperatures of 2,500 degrees F. While on the other side of the 4.5-inch thick carbon shield, the body of the spacecraft will sit at a comfortable 85 degrees F. Parker is endowed with four different instruments, which will analyze the sun’s electric and magnetic fields, plasma, and energetic particles, as well as image its solar wind. The only instruments that must brave the heat of the sun, protruding from behind the safety of the shield, are electric field antennas and a small plasma detector. The wires of these tools are crafted from robust niobium, and encased in a protective layer of sapphire crystal tubes. Besides exploring the curious temperature differences between the sun’s surface and corona, scientists are particularly keen to understand what accelerates solar wind (made up of charged particles emitted from the sun, like protons and electrons). When the particles are spewed toward Earth with sufficient strength, the effect can disrupt radio communications, harm satellites, and in extreme cases, interfere with power grids. Solar wind can reach speeds of 1.8 million miles per hour – but how the particles are accelerated to such speeds remains a mystery. “The state of solar wind is greatly affected during its journey toward Earth and beyond by a number of other physical processes, which mask completely what caused the heating and acceleration of the plasma in the corona in the first place,” Raouafi says. “There is no better solution than diving in the corona to gather the data we need to understand how it works.” So although Icarus flew close to the sun for joy, Parker’s visit to the star is purely a business trip. The probe has some serious work to accomplish and many questions to answer in the coming years.