How Japan's Success Reinvigorated Solar Sailing—and What Comes Next 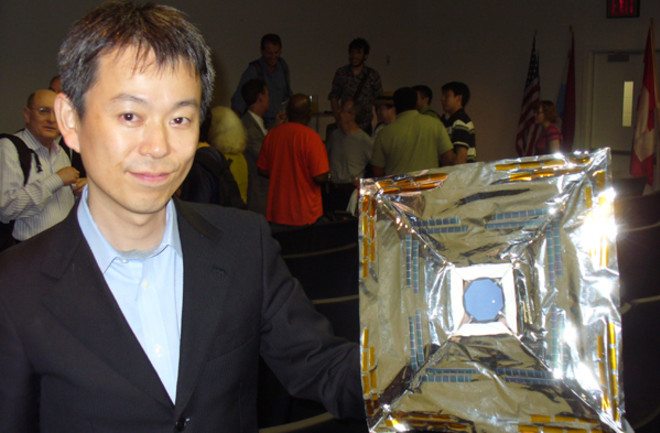 When Ikaros unfurled, it unfurled like a spinning top blossoming into a pinwheel. Out in space earlier this month, the center piece of Japan's solar sail was rotating quickly when it began to extend the arms that had been wrapped up inside. As they stretched out into a stiff X shape, like the stakes that hold a kite taut, the craft slowed to a gentler rotation (a consequence of conservation of angular momentum, like the way a figure skater's spin slows down when she extends her arms). The JAXA scientists then could let Ikaros stretch the shining sail into a square that spanned 66 feet diagonally. When Ikaros unfurled, it also breathed new life into a technology that has been dreamed for decades—using the the pressure of sunlight itself to cruise the solar system, and perhaps beyond. In Brooklyn this week, solar sail enthusiasts gathered for an international symposium. Last night Osamu Mori of the Ikaros team (seen above with a mock-up) was the toast of the party, and a group of experts joined him to celebrate and look forward to a bevy of new explorations. The roster included Planetary Society current director Louis Friedman and director-to-be Bill Nye, NASA's Les Johnson, Malcolm McDowell of the University of Strathclyde in Scotland, and Roman Kezerashvili of the host New York City College of Technology. "I feel like they deserve a ticker-tape parade here in New York City," Friedman said, "rather than just showing up for a scientific conference." So far, Mori said, Ikaros has succeeded in stretching out its sail, confirming that it is accelerating under pressure from the sun's photons, and demonstrating its clever way of steering. Solar cells cover the surface of Ikaros' sail, which is only microns thick, allowing the craft to create photovoltaic electricity. But the sail also carries small sets of LEDs LCDS. When the Ikaros team changes the color of turns particular lights on and off, they change how much light that side of the sail reflects, which can turn it. "It creates differential torque," Friedman told me. "That's very creative." While Ikaros prepares to cruise on a flyby of Venus in the months to come, the Planetary Society's own project nears a launch. Friedman has long been an enthusiast of solar sailing, and the society previously built a craft that was lost during a launch accident—the price of not having hundreds of millions of dollars to launch your own rocket. But now its new LightSail-1 has passed its design review, and Friedman is angling to send the craft, which weighs just about 10 pounds, as a piggyback on a NASA launch next year. NASA, too, is back in the game. Johnson, of the Marshall Spaceflight Center, said NASA investigated solar sails in the early 2000s, but the work mostly faded into the background. Now, with JAXA having shown that a solar sail can be achieved, NASA's solar sail scientists are regrouping. In the hopper, Johnson said, are square sail ideas that look very much like Ikaros and LightSail-1. But NASA also has a much wilder design, a ribbon hundreds of meters long but less than one meter across. Surface area is what matters for solar sails, and different engineers will try any number of designs to find the most efficient. Nye and the other panelists all praised this nascent solar sailing success as a open door to exploration. These missions, Johnson said, are by far the best way to make round-trips in space. "Most other missions run out of gas," he says. But here, "as long as the sun is shining, you've got thrust." Dreamers like Friedman and Nye even imagine solar sails as the propulsion mechanism of choice to visit other stars. However, once you get too far from the sun you'd need a new way to push your vessel along: Like, maybe, ultra-powerful lasers in Earth orbit beaming a stream of photons across the expanse of space. As you might imagine, we don't have ultra-powerful lasers in Earth orbit. Someday, though, we might. "You could be driven all over the universe by the momentum of photons," Nye said. We may all be long gone by the time that happens. But after so many years of yearning for this to work, Friedman finally has the chance to soak it in. "Of course," he told DISCOVER, "I'm tremendously gratified to beat the naysayers." Related Content: 80beats: Today in Space: Japanese Craft Spreads a Solar Sail 80beats: Solar Sail Success: Japanese Craft Powered by the Sun's Force 80beats: Spacecraft That Sails on Sunshine Aims for Liftoff in 2010 DISCOVER: Japan Stakes Its Claim in Space, on the Hayabusa mission