How Habitable is an Earth-Like Exoplanet? 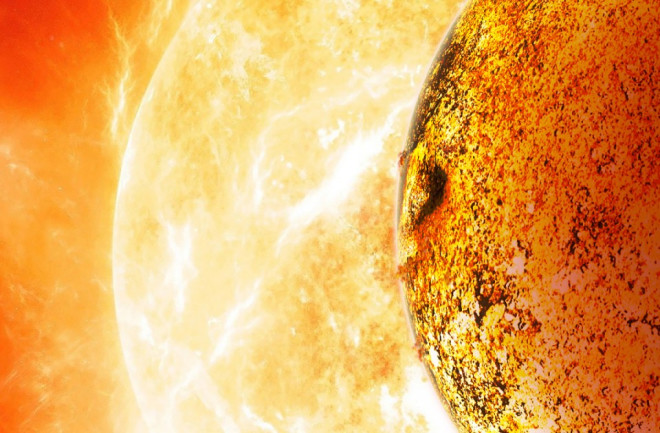 Kepler-78b is a planet that shouldn't exist. This scorching lava world, shown here in an artist's conception, circles its star every eight and a half hours at a distance of less than one million miles. Image credit: David A. Aguilar (CfA) Looking for planets outside the solar system is cool and all, but the obvious subtext behind much of the searching is the possibility of finding another Earth out there — a relatively small, mostly rocky planet with liquid water and, thus, habitable conditions. Today scientists announce they've found a planet that meets all but one of those criteria. The planet named Kepler-78b, some 400 light-years away, was already known to be just 1.2 times bigger than Earth, but twopapers in Nature today announced its mass was pretty close too, just 1.7 times Earth’s own. That means the exoplanet has a very similar density to our homeworld, implying the two are made of basically the same stuff, mostly rock and iron. It’s practically an Earth-twin we’ve found out there! Success!

But don't stop the presses just yet. That planet is actually nothing like Earth — at least as far as habitability is concerned. Despite headlines like “Kepler 78b is Most Earth-like Planet Yet,” and "New Exoplanet is a ‘Virtual Twin of Earth,’ ” you definitely wouldn’t confuse the two worlds.

Kepler-78b is about 20 percent larger than Earth, with a diameter of 9,200 miles, and weighs roughly 1.8 times as much as Earth. Image credit: David A. Aguilar (CfA) Astronomers mean something specific when they talk about Earth-like worlds: basically, they are just referring to planetslike Kepler-78b, with compositions and sizes like Earth's. What that description doesn’t include, but matters enormouslyfor purposes of habitability, is temperature. Specifically, due to Kepler-78b's absurdly close orbit around its Sun-like star, Kepler 78, the world’s surface temperature is around 4,300 degrees Fahrenheit. As "Bad Astronomer" Phil Plait puts it:

With a daytime temperature in the thousands of degrees, the surface of the planet is almost certainly molten rock, so it’s not exactly a vacation spot. But it does show that the Earth is not a one-off planet; the Universe is quite capable of making Earth-sized planets that have the same physical characteristics as well.

Okay, so this planet might not be as big a deal as the headlines suggest, but it’s still pretty neat! This finding proves that Earth-like planets (in the astronomical sense) are indeed possible, and that we can find them. It also means theoretical planetary scientists have a lot of work ahead of them — a find like this was consideredliterally impossible, according to current theories. No one thought a rocky world like this could form so close to its star. And while planets (including possibly some of our own gas giants) have been known to migrate within their systems, none would dare to migrate so close to its star. Or so scientists thought. Yet, there it is! Perhaps the most fascinating part istrying to figure out how it got there. Plait and others suggest that maybe Kepler-78b is the burned out core of a larger gas world whose tight solar embrace blew away its gaseous atmosphere. But, of course, that’s just a guess. Another neat idea (with no evidence to back it up) is that our solar system once had its own super-hot rocky inner world that eventually got torn apart by the sun (as will almost surely happen to Kepler-78b). We'd have no way of ever knowing, of course, since such a body would leave no trace behind after its death. For now, marvel that we can see and know these things about worlds trillions of miles away. And keep an eye out for the increasingly likely discovery, someday, of an actually Earth-like world — and probably a few more near misses like this, too.