How Do Stars Get So Massive? Their Dense, Unstable Disks Could Be To Blame 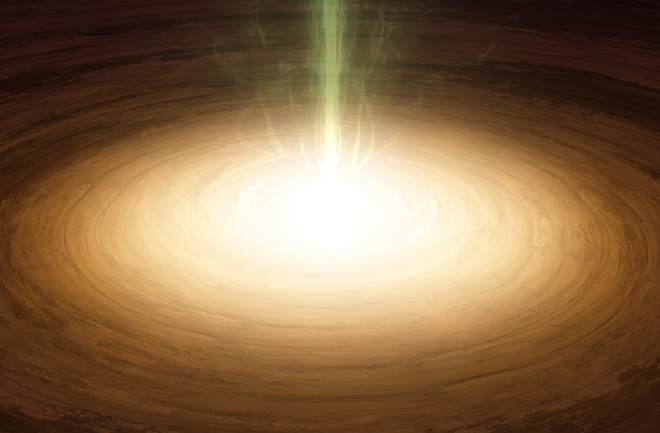 This artist's impression shows the inner disk of a young star collapsing onto its host, becoming hot enough to emit visible light. (Credit: Caltech/T. Pyle (IPAC)) Any bodybuilder will tell you that you can’t bulk up overnight, but that might not be true for stars. While observing infant star Gaia 17bpi, astronomers saw part of its dense disk collapse onto its body below — adding mass at an incredible rate. This encounter is one of the few times that researchers have seen a star's disk become gravitationally unstable and fall down to its host. The findings, which will appear in the Astrophysical Journal, could shed light on stellar evolution and help answer the ever-looming question: how do stars become so massive?

Astronomers have a pretty solid understanding of star formation and evolution: a cold, dense cloud of dust and gas collapses under its own gravity and condenses into a hot ball of matter. The remaining dust and gas form a swirling disk around the infant star, from which it slowly but continually steals material from. Previous observations, though, show that the rate stars steal from their disks is too slow to result in their final, enormous masses. Luckily, one classification of stars could help explain how they gain their mysterious, unaccounted mass. Called FU Ori’s, this class represents stars that are only a few million years old and are surrounded by thick disks of dust and gas. As these disks grow, they become so massive that they lose gravitational stability, and end up dumping their heavy, dusty loads onto their host stars. It’s believed that all stars undergo 10 to 20 of these FU Ori events in their early years, but since they’re still hidden behind the molecular clouds that they formed in, they can be difficult to detect.

But thanks to data from three high-tech instruments, a team led by California Institute of Technology (Caltech) astronomers was able to capture one of these rare events. The discovery started when ESA’s Gaia mission, which is tasked with mapping a billion nearby stars, spotted a star that was increasing in brightness. Intrigued, the team followed up and found that NASA’s NEOWISE satellite, which scans the skies for asteroids and comets, and their Spitzer Space Telescope witnessed the event, too. Capable to detecting infrared wavelengths, data from both NEOWISE and Spitzer showed that dust and gas in the star’s disk started to build up and become hotter, causing it to emit beams of infrared light. It’s believed that part of the disk grew so dense that it collapsed under its own gravity and fell toward its host star, dubbed Gaia 17bpi. And when it did, the matter grew hot enough to emit the influx of visible light detected by Gaia. "These FU Ori events are extremely important in our current understanding of the process of star formation but have remained almost mythical because they have been so difficult to observe," said Lynne Hillenbrand, a Caltech astronomy professor and lead author of the paper, in a media release. "This is actually the first time we've ever seen one of these events as it happens in both optical and infrared light, and these data have let us map the movement of material through the disk and onto the star." Added to the list of just 25 FU Ori’s ever detected, Gaia 17bpi’s sudden growth spurt could further solidify this stellar evolution theory, and help solve the mystery of massive stars once and for all.