How Do Planetary Systems Outweigh the Disks They Formed In? 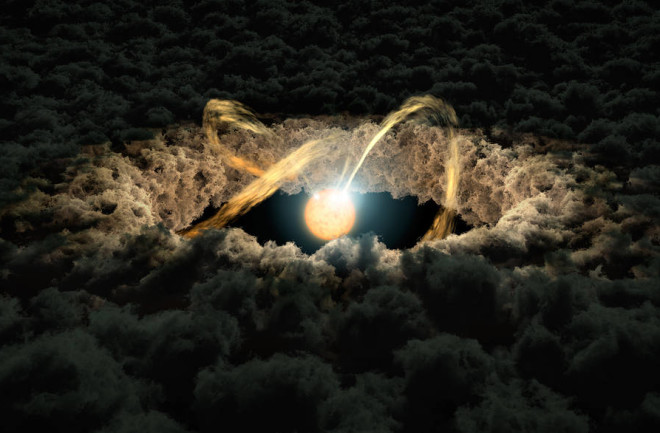 We’ve long thought that planets formed solely from the dust and gas that surrounds their young host stars, but that theory is now being challenged.

A new study published in the journal Astronomy & Astrophysics found that, more often than not, planetary systems actually outweigh the protoplanetary disks that they formed in — suggesting a severe lack of dust and gas around infant stars. The findings are causing researchers to question how planets accumulate so much mass, and wonder if there are serious flaws in our understanding of planet formation.

Many details of planet formation remain a mystery, but there are some things we’re pretty certain about. Stars form when huge clouds of dust and gas collapse in on themselves and condense into hot cores that absorb the material around it. In the years following a star’s formation, a colossal disk of leftover material looms around it — creating a protoplanetary disk. These tiny particles start colliding with one another and cementing together, and if they grow large enough, they’ll evolve into the terrestrial and gaseous planets we see today.

And since planets are composed of dust and gas from the protoplanetary disk, it would only make sense that a disk’s mass would align with or exceed the total mass of its planetary system, right?

Well, that’s the logic that ESO astronomer Carlo Manara was following when he set out to study protoplanetary disks and the planets that form within them. His data, though, showed quite the opposite.

Manara and his team of researchers used data from the Atacama Large Millimeter/submillimeter Array (ALMA) in Chile to probe over 100 stars between the ages of 1 and 3 million years old — around the age that stars begin giving rise to planets. By measuring the radio waves that emit from the disks at millimeter wavelengths, they were able to estimate the total mass of each disk.

They then gathered data from older stars that had similar masses, and compared the weight of their planetary systems to the weight of the young stars’ protoplanetary disks. To their surprise, they found that the vast majority of disks came up far lighter than expected, with a median mass of just about 20-30 percent that of their planets. That leaves about 75 percent of the material making up the planets unanswered for.

Unfortuantely, it’s a question that still hangs in the air. However, there are some theories that could explain the dust shortage. The team observed stars that are between one and three million years old, but it’s possible that disks are much heavier in the first million years of a star’s life, and that planets start forming during this period. This theory is supported by recent researchthat suggests that Jupiter’s core formed within the first million years of the sun’s existence. The study notes, though, that planet formation isn’t very efficient, and that cores usually don’t form that quickly. Plus, the theory implies that some disks were nearly 100 times more massive during their first million years than they were in the two million years that followed, a fairly drastic drop in weight.

It’s also possible that disks are continuously drawing in material from the interstellar medium — giving planets more to feed on during their formations, but keeping the disk’s mass consistent over time.

There’s also a chance that the missing material does exist within the protoplanetary disks, but that our technology simply isn’t advanced enough to see it. Since ALMA’s specialty is detecting material at millimeter wavelengths, it has a tough time identifying anything larger than about a centimeter. That’s a little big for a dust grain, sure, but it isn’t an unfathomable measurement.

With so many ways to explain this missing matter, the only way to find out for sure is to conduct follow up investigations. Until we conduct more observations or our technology gets better, we’ll just have to live with the mystery.