How Big is That? Scale and Rates of Volcanic Eruptions 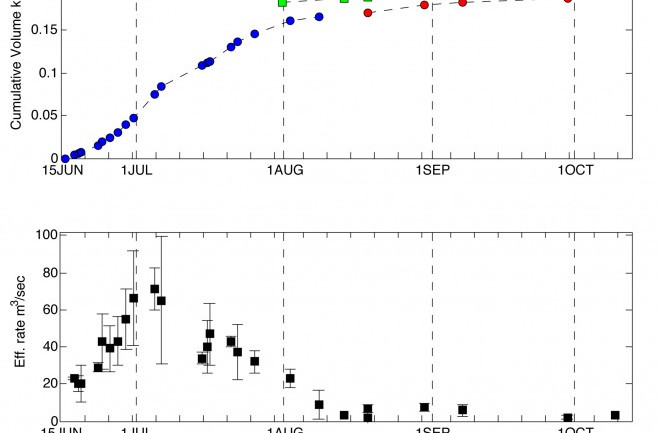 So, I was sent the following graphs the other day - they show the (top) cumulative volume erupted from Puyehue-Cordón Caulle between June 15 and October 1 and (bottom) the eruption rate of the eruption at points during that slice of time. It is pretty nifty stuff - a total of ~0.15 km^3 of material erupted with a peak effusive rate of ~70 m^3/s - accounting for ash and lava flows produced during the eruption. However, when I was thinking about this data, I was struck with the fact that, although I have a sense of just how big (or not) those volumes might be, scale and rates can be tough to understand by most people. So, I thought it would be fun to discuss what the scale of volcanic eruptions and what exactly do these rates of eruptions mean. Why do we care about the volume of an eruption anyway? How much material is erupted - lava or tephra - is going to dictate what sort of potential hazard or long term damage from the eruption. It is also how we compare explosive eruptions, using the Volcanic Explosivity Index (see below). It ranks eruptions based on the volume of the eruption and is calibrated for volcanic tephra (fragmental material), so dealing with effusive eruptions that produce lava flows is tricky, but remember, the VEI is merely a tool to compare, not anything inherent in the eruptions. If we look at the VEI, the current Puyehue-Cordón Caulle eruption ranks as a VEI 4 eruption - on the same scale as the 1902 eruption of Pelee on Martinique or the 2010 Eyjafjallajokull eruption. That might seem large, but at least one VEI 4 eruption occurs every year on the planet, so, geologically speaking, they are fairly common. Much like the Richter scale, the VEI is not a linear scale, so a VEI 4 eruption is not twice as large as a VEI 2, but rather 100x larger. That means the large eruption, like a VEI 6 such as the Pinatubo eruption in 1991, erupted over 10 km3 of material. That is a lot of erupted tephra! Just how big are these volumes, anyway? Scale can be a tricky thing to master. On of my favorite books is Douglas Adams'Hitchhiker's Guide to the Galaxy and puts the difficulty comprehending the scale of large things perfectly: "Space ... is big. Really big. You just won't believe how vastly, hugely, mindbogglingly big it is. I mean, you may think it's a long way down the road to the chemist's, but that's just peanuts to space." Comparisons can make scale a little easier to handle. Some popular scale comparators:

*: OK, maybe not as large as that dump truck. Now, let's take a look at the Puyehue-Cordón Caulle eruption. Overall, it has now erupted 0.15 km^3 of volcanic material - that is 150,000,000 m^3. Using our comparators, that volume is 60,000 Olympic-size swimming pools. For a comparison for that comparator, there are 47 Olympic-size pools in all of Australia. That is 39 billion gallons - the US consumes about 150 million gallons of milk each year, so that is 263 years worth of milky goodness. How many coolers would you need to bring to the tailgate for the Puyehue-Cordón Caulle eruption? Only 3 billion - so now that the Earth's population is 7 billion, that is only 2.3 people sharing each cooler. Want to build the Puyehue-Cordón Caulle eruption? You'll need to make ~20 million dump truck loads. All of that sounds big, but remember, this eruption is only a VEI 4. Multiply all of those numbers by 100 for a VEI 6, by 1000 for a VEI 7 like Tambora in 1816 and by 10,000 for a Yellowstone-scale eruption (VEI 8+). The same might be said for rates of eruption - with what can we compare volcanic eruption rates? Some comparators:

Again, turning our attention to the Puyehue-Cordon Caulle eruption, its maximum effusive rate for the lava flow was ~70 m^3/s in early July. Looking at our comparators, the eruption suddenly looks a small - only about 0.12 times the rate of the flow down the US side of Niagara Falls - and only 0.03 times that of the Canadian side. It is still a decent about of material - you'd need to flush 11,667 toilets every second to keep up with that peak effusion rate. It would also be the same as about 300-600 fire hoses going at once. The Puyehue-Cordon Caulle effusion rate is fairly low compared to some other volcanic eruptions. Here are some other eruption rates for a selection of volcanoes (note, some of this is apples and oranges as we have explosive and effusive eruptions, but rates are rates):

This puts Puyehue-Cordon in a little perspective - it is a larger eruption that many other continental arc volcanoes like St. Helens and Augustine - you'd only need maybe 2.2 fire hoses to match the volume of St. Helens averaged over 1980-87. However, those rates are over longer periods, not a single eruption. It was much smaller the geologically extreme rates of eruption like Pinatubo in 1991, Tarawera in 1886, Laki in 1786 or the Columbia River Basalts. In those eruptions, the eruptive rates exceeded up to 8 times the US side of Niagara Falls for Laki, 88 times the US side of Niagara Falls for Tarawera and 370 times the US side of Niagara Falls every second for Pinatubo. How many toilets to flush the Roza Member of the Columbia River Basalts out of the ground? As many as 135,000 flushes per second! However, it is in the same order of magnitude of the average continental volcanism globally each year. One important thing to remember is I'm comparing the peak eruptive rate. This peak only lasted a week or so and before early July and afterwards, the eruptive rate was much closer to 5-40 m^3/s, so more in like with the typical average rates at continental volcanoes like Augustine and St. Helens. Hopefully this helps with getting a handle on the scale of eruptions and the rates that volcanic material is erupted. Sure, looking at satellite images of these vast plumes (see below) stretching across continents is impressive, but even some of these seemingly large events are, geologically, very run-of-the-mill. That does not make them any less exciting - but does show the just how large the systems that operate on Earth can be.

More From Discover
The Sciences
Here's How the Latest U.S. Intelligence Report on UFOs Might Bring Science to the UFO World
The Sciences
First Report of a New Navigational Supersense That Birds Use to Find Their Way Home
The Sciences
The Future of Satellites Lies in the Constellations
Recommendations From Our Store
My Science ShopCosmos: Possible Worlds
My Science ShopStrange Science
My Science ShopEinstein's Universe
My Science ShopElements Flashcards
Shop Now
Stay Curious
Join
Our List