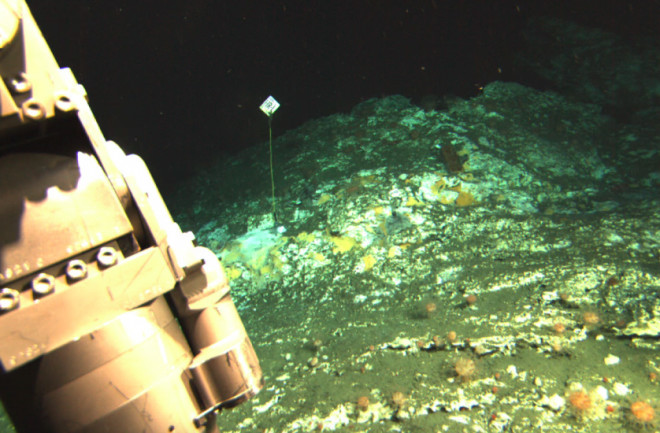 The methane seeps of Hydrate Ridge are a challenging, complex environment for stable isotope probing proteomics experiments. (Image: WHOI/Atlantis) Microorganisms are the base of the planet’s biological pyramid, shaping the world we know today in innumerable unseen ways. Nearly everywhere scientists have looked - from subglacial Antarctic lakes to acidic rivers and the ocean’s depths - microbes persist. Yet the vast majority - so-called microbial dark matter - has not been isolated into pure culture, precluding a range of informative experiments. We know microbes are pervasive and we know they’re important, but taking the next step has proven challenging: how can we link identity to function and figure out what different organisms are doing in these complex microbial milieus? It’s a foundational tenet of the reductive scientific worldview, this idea of breaking a large complex system into its constituent parts and piecing together a more mechanistic knowledge of the whole. To understand how a car runs, you’ve got to see what the wheels, the radiator, the fan belt, and the brake pads are all doing, and how these and other functions interact to propel a few thousand pounds of metal forward. In this spirit, some colleagues and I recently set out to take the functional identity approach to the microbial communities of the deep sea. At seafloor methane seeps, clumps of co-dependent microbes eat methane through a process that operates at the edge of energetic feasibility. The details - which proteins are involved, other organisms that may be playing a role, supporting functions that enable methane consumption - are largely unknown. But given the global climate repercussions (methane is 25 times stronger than carbon dioxide as a greenhouse gas), understanding the intricacies of methane-based ecosystems is more than just an academic question. A genomics-centric approach to these questions - sequencing all the DNA at a given site - is a useful first step, but insufficient for the questions we were after. Instead, we looked at the proteins synthesized during the experiment; after all, proteins are where the rubber hits the road in a biochemical sense, where reactants are turned into products, releasing or consuming energy and making biology happen in the process. To focus in on newly generated proteins, we used stable isotopes as atomic tracers, a more general technique referred to as stable isotope probing, or SIP. All amino acids contain nitrogen; in your typical seawater, that nitrogen pool is 99.6% 14N (seven protons, seven neutrons) and just 0.4% 15N (seven protons, eight neutrons). In the SIP proteomics approach, we feed experimental bottles of methane seep mud lots of 15N, and the amino acids and proteins that are made contain an unnaturally high proportion of “heavy” nitrogen. Then, proteins can be extracted, chopped up into smaller pieces, and run through a mass spectrometer. Calculated masses tell us two important things: the amino acid sequence of the protein fragment, and its distribution of 15N vs. 14N atoms. More 15N means the associated protein was made recently, and, by extension, was needed in the experimental environment. Our partners at Oak Ridge National Laboratory have been perfecting this technique for years. Chongle Pan, a Staff Scientist in the Computer Science and Mathematics Division, as well the BioSciences Division, describes the advent of SIP proteomics as a logistical advantage more than a scientific one. Tracing stable isotopes into DNA or other biomolecules offers useful information about which community members are active (if not what they’re doing), but practitioners often struggled to get enough material for analysis. Proteins, however, often form up to half of a cell’s biomass, so “proteomic SIP, if it worked, would be much easier to do experimentally,” Pan recalls thinking. “But computationally, it is much more challenging.” With two variables - peptide sequence and its 15N isotopic enrichment level - things quickly get complicated. “We essentially have to try different combinations of peptide sequences and isotopic enrichment levels to match to the measured mass of an ion,” Pan says. While Pan and his Oak Ridge colleagues were drawn to the computational challenges, microbial ecologists found that the ability to do SIP with proteins opened up a new dimension of functional analysis. Peptides are mapped to proteins, which correspond to genes in an accompanying database. Since each gene is linked to a given organism, you can determine not only which organism is active, but also what specific biological function they’re enacting. Better mass spectrometers and faster computers - especially the Oak Ridge Leadership Computing Facility's Titan supercomputer behemoth - were coupled with Pan’s advanced matching algorithms to bring the approach into the realm of possibility. It’s a remarkable method that has been used previously in relatively low-complexity microbial environments such as acid mine drainage biofilms, a benzene-contaminated aquifer, and mixed cultures. But how would this approach hold up to the challenges of the slow-growing, highly complex microbial communities of deep sea methane seeps? And what new insight could the results tell us about how the ecosystem works? (…to be continued…)