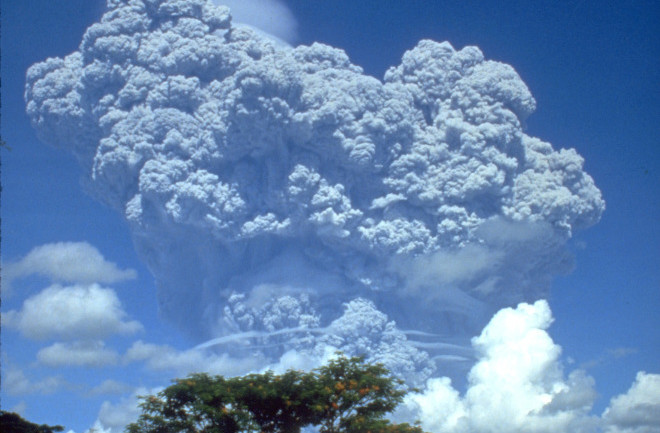 The 1991 eruption of Pinatubo in the Philippines. The eruption released a large amount of sulfur dioxide, but did the presence of anhydrite reduced how much sulfur was expelled? Photo by Rick Hoblitt / USGS. Volcanic eruptions can be some of the most significant agents for affecting the Earth's climate. Eruptions send ash, sulfur dioxide, carbon dioxide, chlorine, and more into the lower and upper atmosphere, spreading with the winds to impact local to global climate. The most notorious of these agents for change is sulfur dioxide, one of the most abundant materials released in any volcanic eruption, explosive or effusive. Sulfur is found dissolved in all magma that is erupted, so when that magma erupts, the sulfur dioxide can be released into the atmosphere, impacting the planet's climate for months to years to decades (or possibly longer). However, there are some minerals that form in magmas that could help prevent the release of such massive amounts of sulfur that bring on a volcanic winter -- they might not be able to stop all the sulfur, but like a sponge, they can suck up some of the sulfur that might make it into the atmosphere instead. Sulfur's impact on climate really stems from the reaction of sulfur dioxide and water vapor in the atmosphere. This produces tiny droplets (aerosols) of sulfuric acid. This sulfuric acid can produce acid rain, like what we've seen from the burning of coal in industrialized areas. However, that isn't the biggest threat that sulfur poses to the Earth's climate. Sulfuric acid in the stratosphere will reflect solar energy back into space (i.e., increase the Earth's albedo), thus lowering the temperature for the lower atmosphere in which we (and everything else) lives. This cooling can be profound, even for moderate eruptions. The 1991 eruption of Pinatubo cooled the lower atmosphere on average by 0.5°C for a few years after the eruption. Larger eruptions caused even more cooling, sometimes >1°C for years to decades after the eruption. Sulfur dioxide also erodes the ozone layer that protects the Earth's surface from the UV rays of the Sun.

The Holuhraun eruption in Iceland, seen in September 2014. The eruption is one of the most prodigious emitters of sulfur dioxide in decades. Photo by Ahjartar / Wikimedia Commons. Magma itself contains a lot of sulfur, sometimes upwards of a percent of the magma is sulfur. This sulfur occurs as sulfur or sulfur compounds dissolved in the magma, so as a consequence, when the magma rises and decompresses, the sulfur comes out of solution as a gas (usually). This is why at active volcanoes, you can monitor the amount of sulfur dioxide being released to tell you about the magma rising up underneath the volcano -- usually the more sulfur, the more magma or the the closer the magma. Different magma will have different amounts of sulfur as well. We see this today with the large amount of sulfur dioxide being released during the Holuhraun eruption in Iceland, where >2300 μg/m^3 of sulfur dioxide was being emitted during January 2015 (compared to the hundreds of μg/m^3 typically seen at Hawaii's Kilauea.) Some of this difference in sulfur content in the magma comes from the source of the magma - that is, the mantle material that melts under (tens or more kilometers) the volcano. However, that sulfur content can be altered in the composition of the magma allows for certain minerals to form, specifically those that have sulfur in their structure. Minerals with sulfur in their structure take in sulfur from the melt and lock it in their crystalline lattice, meaning that it is no longer available to degas as sulfur dioxide. Now, these sulfur-rich minerals aren't very common in most magma. They include minerals like pyrrhotite (Fe(1-x)S), other copper sulfides, haüyne (Na3Ca(Si3Al3)O12(SO4)) or anhydrite (CaSO4; see above). They have higher partitioning for sulfur: when conditions are right for these minerals to form, then sulfur is more likely to go into the mineral's lattice than to stay in the magma as dissolved sulfur.

A cross-polarized thin section image of magmatic anhydrite (anh) found in the plutonic rocks of the El Teniente copper deposit in Chile. Photo from Stern et al. (2007), Economic Geology. A recent study in American Mineralogist tries to hammer out exactly how sulfur is going to behave in a magma as these sulfur-bearing minerals and fluids form. Huang and Keppler (2015) performed a series of experiments on different compositions of magma in different conditions (mostly related the oxidation state of the magma). What they found is that in magma that is under reducing conditions, as the sulfur content of the magma increase, so does the sulfur content of the co-existing fluid (the gas that would be released by the magma). However, when the magma is oxidizing, as the sulfur and calcium content of the magma increases, the sulfur content of the co-existing fluid decreases. Now, why would that be? Well, it comes down to making anhydrite stable in a magma so it starts to crystallize. As the calcium and sulfur contents increase in the magma, anhydrite will form (under certain pressure and temperature conditions). Anhydrite isn't a mineral you typically associate with magma as it is usually found in places where water evaporates, like a dry lake bed. However, anhydrite has been found in magma and based on the experiments by Huang and Keppler (2015), igneous anhydrite might be important for how much sulfur a volcano releases during an eruption. Anhydrite (and other sulfur-bearing minerals) that form in magma act as a sponge for the sulfur dissolved in the magma. This will take sulfur out of the magma and lock it in the anhydrite crystals rather than let it get released as a gas when the magma decompresses (and potentially erupts). This might explain why some eruptions that seem like they should have had a large climate impact based on the volume of ash they emitted didn't end up releasing as much sulfur dioxide as predicted. If anhydrite or other sulfur-rich minerals were crystallizing as the magma was ascending, some of that sulfur punch is likely removed from the eruption. All that sulfur gets locked in crystals rather than thrown into the atmosphere. Now, this isn't really a tool to reduce the impact of an impending eruption. It would be impossible for humans to change the composition of the magma under a volcano to suck up that sulfur before an eruption occurs. However, it does help explain why the relationship between the size of an eruption and its climate impact isn't as simple as it seems. We can thank these uncommon minerals for keeping sulfur out of the atmosphere when these big eruptions occur. Sources