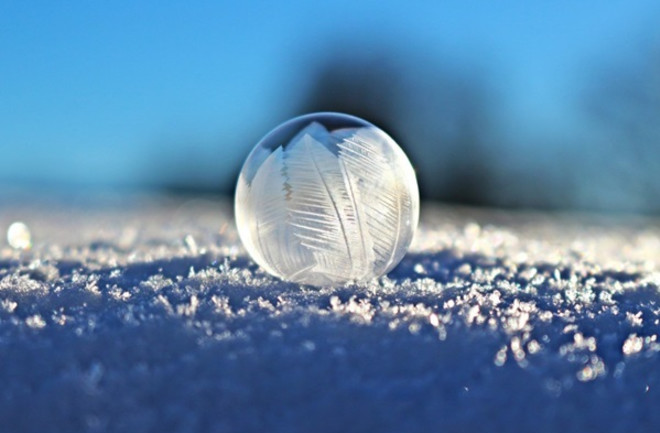 Researchers have developed a device called a snowball chamber, which keeps water in a supercooled state until an incoming particle triggers the water to freeze almost spontaneously. They hope the new tool will help them make the first direct detection of dark matter. (Credit: Pxhere.com)

Sign up for our email newsletter for the latest science news
Researchers have developed a device called a snowball chamber, which keeps water in a supercooled state until an incoming particle triggers the water to freeze almost spontaneously. They hope the new tool will help them make the first direct detection of dark matter. (Credit: Pxhere.com)

If you enjoy watching videos on the internet, you've likely already witnessed the phenomenon known as supercooling. Basically, the process involves taking ultra-pure water and putting it into a clean, smooth container that lacks any structural defects. If the conditions are right, when you attempt to freeze the water by dropping its temperature below 32 degrees Fahrenheit (0 degrees Celsius), it will surprisingly remain in a liquid state.

This is because in order for ice crystals to form, they need a foundation upon which to grow, called a nucleation site. Typically, ice first forms around dust particles or rough spots on a container's surface. But if there is no nucleation site from which the ice can spread out, the water will continue to drop in temperature while remaining in liquid form. Then, when you add a nucleation site to the supercooled water — by either introducing an imperfection or vigorously shaking the container — the chilled liquid will solidify into ice almost spontaneously.

It's this odd behavior of supercooled water that researchers are now hoping to exploit in order to help them search for the elusive substance known as dark matter, which accounts for roughly 85 percent of the universe's overall mass, yet only weakly interacts with normal matter.

According to new research presented on April 14 at a meeting of the American Physical Society (APS) in Denver, Colorado, scientists have shown — for the first time — that supercooled water does not need a macroscopic nucleation site to suddenly turn to ice. Instead, the researchers found that introducing subatomic particles, namely neutrons, can also cause supercooled water to rapidly freeze.

"We managed to discover a new property of supercooled water," said lead author Matthew Szydagis, a physicist at the University at Albany in New York, in a press release. "To our great surprise, we found that some particles (neutrons) but not others (gamma rays) trigger freezing."

With these new results comes a tantalizing possibility: Astrophysicists may soon be able to use this new-found property of supercooled water to aid in their never-ending hunt for one of nature's biggest enigmas. "Not only do we have a new detector of fundamental particles," Szydagis said, "but potentially of dark matter because neutrons are thought to emulate it."

The researchers have dubbed the new detector the "snowball chamber," a name proposed by Szydagis' wife, linguist Kel Szydagis. The snowball chamber mirrors the names of other devices commonly used in particle physics. These include the cloud chamber and the bubble chamber, which use supersaturated vapor and superheated liquid, respectively, to track the movements of charged particles within a vessel.

But because water within a snowball chamber does not spontaneously freeze when charged particles like electrons disturb it, the study says the detector is "potentially ideal for dark matter searches seeking nuclear recoil alone." Most experiments that attempt to directly detect dark matter rely on observing how the nuclei of atoms recoil after they interact with dark matter particles — which are thought to continuously stream through the Earth in huge numbers.

But one of the greatest challenges related to detecting dark matter is eliminating interference from other types of background particles, which tend to be charged and therefore scatter electrons. However, such charged particles don't seem to diminish the effectiveness of the snowball chamber.

The advantage of the snowball chamber over many other experimental setups is that if a passing dark matter particle gives even the tiniest nudge to the nucleus of an atom in supercooled water, it can trigger the water to spontaneously freeze. If all other possible causes of nucleation are eliminated, this would indicate that an interaction with a dark matter particle occurred.

Unlike other methods that attempt to detect dark matter, which are suited for hunting particles hundreds to thousands of times heavier than the mass of a proton, the researchers point out the snowball chamber might allow them to expand their search to lower mass alternatives — including dark matter particles less than about a dozen times the mass of a proton."All of my work is motivated by the search for dark matter, a form of matter we're sure is out there because we can observe its indirect gravitational effects," said Szydagis. "It makes up a significant fraction of the universe, but we have yet to uncover direct, conclusive and unambiguous evidence of it within the lab."

Although the researchers point out the sensitivity of the snowball chamber is currently below the threshold needed to detect low-mass dark matter particles, they have identified where improvements can be made. According to the study, they will continue to work on increasing both the purity of the water and the cleanliness of the container, as well as supercooling the water to even lower temperature than the -4 F (-20 C) they achieved.

Additionally, since particle physics is often a numbers game, they would like to increase the size of the snowball chamber so it can hold tens — or even hundreds — of kilograms of supercooled water. But that's much farther down the road. "Since this is basic research that has never been done before, there was no guarantee it would work," Szydagis said. "It was a 'let's try it and see' approach — the scientific method in its most basic form."

From Dark Matter to Squirrels

Though the newly developed snowball chamber may one day aid in the hunt for dark matter, the paper points out that it could be used for studying other worthwhile topics. For example, according to the paper, "Planets like those in the Trappist-1 system close to a red dwarf star [produce] more radiation than our Sun."

If these planets have supercooled water in their atmospheres, they "may experience different cloud formation rates and climate than currently modelable." But astrophysics is not the only discipline that may benefit from research carried out with the snowball chamber. Atmospheric scientists could also use it to study how cosmic rays may trigger the nucleation of supercooled water in Earth's atmosphere.

Or, according to the paper, "in biochemistry, our new result may affect the study of animals which capitalize on supercooling of their blood," like the arctic ground squirrel. "All in all, this is a promising start to a completely new technology," the APS presentation concluded. A preprint of the research is available for review on arXiv.org.