Lithium as superhero, Internet as sex-research gold mine, DISCOVER blogger as TV star 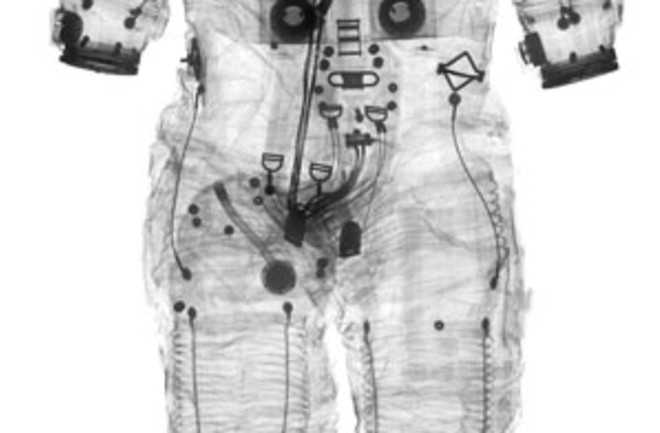 Daredevil pilots of the 1930s donned pressurized headgear that resembled old-time diving helmets. Early mock-ups of a lunar space suit had shoulders the size of a linebacker’s. These are a few of the wild stages in the evolution of astronaut couture on display in this lively exhibit.

Museum of Science and Industry, Chicago

Many of the original space suits are too fragile for a traveling exhibit (one taking place in Earth’s gravity, at least), so visitors here are treated to near-life-size images, some of them particularly revealing. X-ray photos show the suits’ interior mechanics, such as communications wiring and the ball bearings that allowed joints to move. Museumgoers can also check out oddities like a boot used in lunar training exercises and a state-of-the-art fecal collection bag. If you want to get under the skin of a moonwalker, this is your chance: Also on hand are samples of the 21 layers of fabric—from Mylar to cotton—that made up the Apollo space suits. On view now.—Shannon Palus

Design for a Living World While in Chicago, visit the Field Museum to see designs crafted from eco-friendly resources—including Isaac Mizrahi high heels made of salmon skin﻿. —S.P.

Bottled Lightning  by Seth Fletcher (Hill & Wang)During the early 1900s, Thomas Edison failed to perfect an electric car battery but made one crucial discovery: Lithium hydroxide increased his battery’s storage capacity. “After scientists have spent decades scouring the periodic table for better battery material, we know that lithium is the best possible foundation for electrochemical energy storage,” writes science editor Fletcher. He follows lithium from the South American salt flats where most lithium minerals are mined to the labs of General Motors, tracing its journey from obscure metal to one of the most sought-after resources on earth—and perhaps the centerpiece of the automotive future.

Martian Summer by Andrew Kessler (Pegasus)Kessler hit the astronomy jackpot when he was allowed in the control room of the Phoenix lander, the Mars probe that struck water ice. Geeky giddiness overcomes him at times, but Kessler’s access allows unique insights into characters like mission leader Peter Smith with his “cowboy swagger,” as well as into the challenges of talking to a robot across hours-long communication delays.

Rising Force by James D. Livingston (Harvard) No, MIT professor Livingston writes, the magnetically levitated island in Gulliver’s Travels (or its homage in Avatar) is not possible—“magnetic forces decrease very rapidly with distance of separation. . . . Sorry about that.” But while Jonathan Swift’s version of levitation is science fiction, it and other cultural examples dot this accessible illustration of the physics that allow for real-life wonders like maglev trains. —Elise Marton, Nicole Dyer & Andrew Moseman

Terra Nova Mondays, 9 p.m. ET, FOX Following in the footsteps of Wall-E, Fox’s new sci-fi drama eschews the shiny future of The Jetsons in favor of the dystopian fear that our society is headed for disaster. Terra Nova’s characters, the Shannon family and a supporting cast, are fortunate enough to find a way out of the dying world of 2149: by traveling through time, scooting 85 million years into the past to found a new settlement. There they discover a lush planet with ample resources, along with ample opportunity for executive producer Steven Spielberg to stir up Jurassic Park-like adventures. We hope Terra Nova digs its teeth into the human drama of restarting society in an unfriendly Eden. And, we admit, we also look forward to a few good, old-fashioned dinosaur chases.—A.M.

Phil Plait wants to see Earth destroyed (hypothetically, that is) so he can cut through the ridiculous claims of science fiction to find the real dangers lurking out there in the universe. In his television special, the DISCOVER blogger conducts experiments with explosion-happy scientists to find out whether or not asteroid assaults or alien attacks could truly happen—and how we could stop them. Available May 31.

Human Planet  A big, gorgeous documentary as only the BBC can do it, this nine-part series reveals how humankind adapted to survive, thrive, and ultimately explore in every environment on the globe. Available April 26. —A.M.