The beauty of science, craziness of leaders, and rehabilitation of Ground Zero 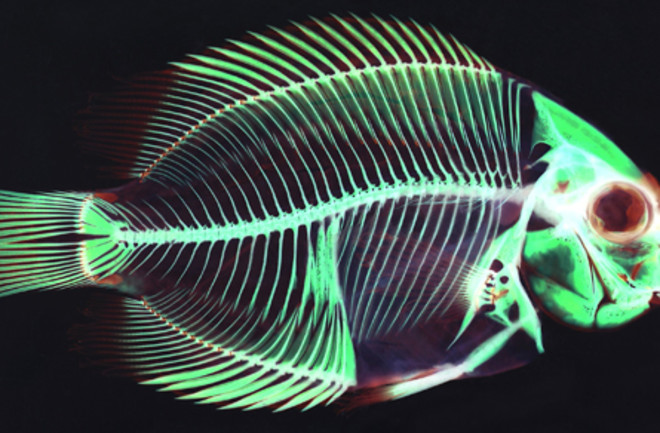 American Museum of Natural History, New York Scientific imaging techniques are generally optimized for intellectual rather than aesthetic value, but they often produce beautiful results anyway. The 27 large prints in the “Picturing Science: Museum Scientists and Imaging Technologies” exhibit showcase what the museum’s researchers see as they pore over animals, artifacts, and other targets of inquiry. In one, dyes tint the cartilage of an Atlantic spotted mackerel blue and its bones red, while enzymes render the fish’s flesh transparent. Open now. —Caroline Spivack

A First-Rate MadnessBy Nassir GhaemiCould mental illness be a benefit during times of crisis? The author, a psychiatrist, draws on the life histories of several influential leaders to make the case in this intriguing book. His test subjects include Abraham Lincoln (who reportedly suffered from depression), Winston Churchill (bipolar tendencies), JFK (manic traits, compounded by steroid use), and Hitler (bipolar tendencies, exacerbated by abuse of amphetamines). Depression can lead to more realistic decision making, Ghaemi says, while mania cultivates creativity and resilience. His sample size is too small to draw truly meaningful connections between mood disorders and leadership, but Ghaemi’s theory hardly seems a stretch given the surplus of nutters in positions of power.

Knocking on Heaven’s DoorBy Lisa RandallTo most people, matter and space are taken for granted, nothing more than the backdrop against which real life takes place. To physicists, however, these are the essential targets of inquiry. In this lucid dissection of the scientific method from Galileo to string theory, physicist Lisa Randall of Harvard University charts the relentless efforts to understand the fundamental construction of the universe. It is an inspiring trek that yanks you out of the everyday and into the deepest imponderables, sensitized to the mysteries and marvels embedded in every atom. And if you are curious about exactly what’s up with the Large Hadron Collider, that’s in here too, clearly laid out in Randall’s thoughtful prose.

HarnessedBy Mark ChangiziResearchers routinely theorize about how the human brain evolved its remarkable knack for language. Neuroscientist Mark Changizi takes a different tack. Rather than the brain evolving to handle language, he argues, language took advantage of sounds that we were already equipped to interpret: the bangs, booms, and whooshes that are common in nature. The same goes for music, he says, where beat and volume may mimic the footfalls and distance of overheard human movement. Like most theories about cognitive evolution, Changizi’s is difficult to prove or disprove—behavior doesn’t leave fossils, after all—but he builds a compelling case, and his wry style of storytelling makes for an entertaining read.

Rambunctious GardenBy Emma MarrisThe three-quarters of Earth’s land not covered by ice is actively being used by people, and even the other quarter is feeling our effect. Seamlessly intertwining lyrical travelogue with ecological science, journalist Emma Marris explores conservation efforts worldwide, venturing from fragile island ecosystems in Hawaii to a seemingly primeval forest in Poland and Belarus. Throughout, she champions a controversial approach to conservation. Since humans have been altering the environment since prehistory, she says, there is no untouched nature to preserve. Instead, we should actively manage nature, interfering when necessary—by reintroducing native predators, moving species under threat, or even embracing invaders—to buttress important ecosystems and preserve diversity. —Nicole Dyer, Veronique Greenwood & Valerie Ross

NOVAFor the start of its 37th season, PBS’s popular science documentary show marks a very different anniversary: one decade since the fall of the Twin Towers. NOVA takes a behind-the-scenes look at the reconstruction of Ground Zero, where teams of architects and engineers are attempting to build taller, safer, and greener than before. At the same time, they are confronting the unique technical challenges of construction in such a complex urban setting. Coming in October and November, NOVA also explores the search for life elsewhere in the solar system, digs into the past using clues from a frozen mummy, and investigates the nature of space and time with theoretical physicist Brian Greene. PBS, returning September 7 at 9 p.m. EDT. —Gillian Conahan

Apollo 18The Weinstein Co.NASA’s storied Apollo program attempted seven lunar landings in the 1960s and ’70s. Its only failure, the near-fatal Apollo 13 mission, inspired the Academy Award–winning movie of the same name. But what if there had been another failure—one so shocking that the mission’s very existence was hidden from the public? Using “found footage,” this sci-fi horror flick follows the two astronauts of the fictional (or is it?) Apollo 18 on America’s clandestine and catastrophic final voyage to the moon.

When the last (or was it?) moon lander, Apollo 17, splashed down in 1972, NASA did in fact have plans for three more lunar missions. But none made it off the launchpad, leaving the program’s later projects open to speculation by conspiracy theorists and screenwriters. Incorporating grainy, shaky footage, Apollo 18 purports to expose a secret mission funded by the Department of Defense that makes it to the moon in 1973. Soon the astronauts have a mysterious infection and a very good reason not to go back to the lunar surface. Be prepared: The Blair Witch Project has gone to space camp. In theaters September 2. —Katie Palmer